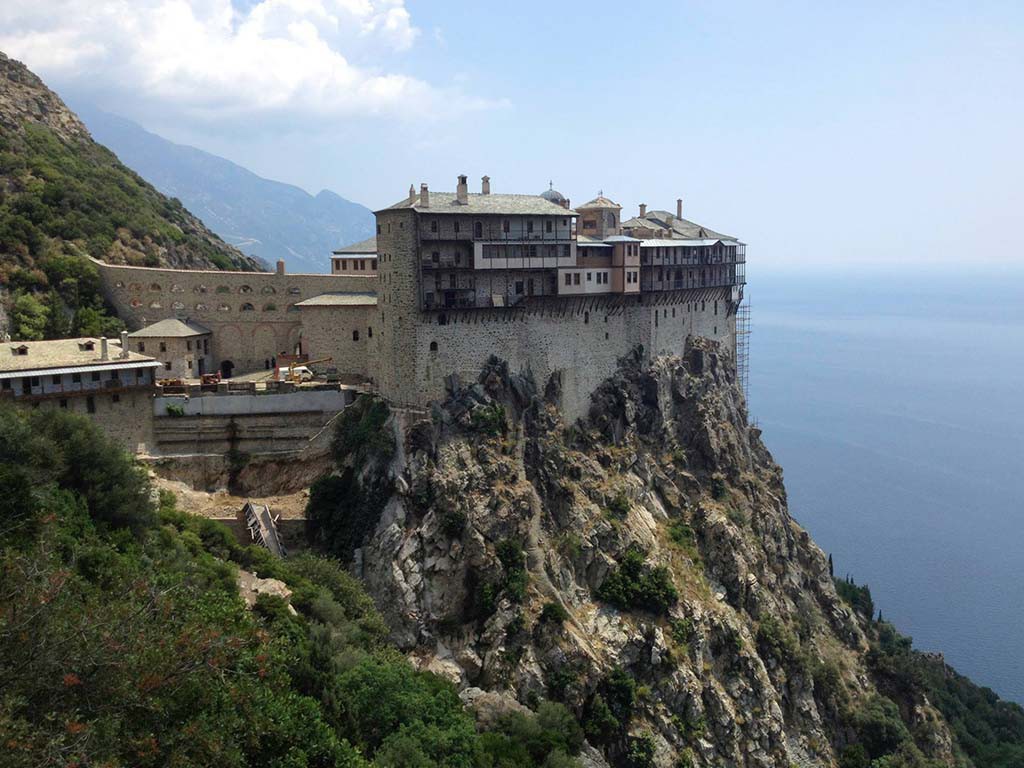 Simonopetra Monastery, also known as Monastery of Simonos Petra, is an Eastern Orthodox monastery in the monastic state of Mount Athos in Greece. It is situated in the southern coast of the Athos peninsula, between the Athonite port of Dafni and the monastery of Osios Grigorios. The monastery is a combination of three seven-storey buildings, built on top of a huge rock, 300 meters above sea level. The main building has been described as the most daring construction of the peninsula. The monks of Simonopetra traditionally count the floors from top to bottom, thus the top floor is the first floor and the bottom floor the last. Simonopetra ranks thirteenth in the hierarchy of the Athonite monasteries and celebrates the Feast of the Nativity of Christ.

The Holy Monastery of Simonopetra was founded in the 13th century by Saint Simon. According to tradition, Simon, while dwelling in a nearby cave, saw a dream in which Virgin Mary instructed him to build a monastery on top of the rock. The original monastery was called by Simon "New Bethlehem". In 1364, the Serbian despot Jovan Uglješa funded the renovation and expansion of the monastery with new buildings and a large portion of land.

During its long history it has been burned several times. It was first burned in 1580, resulted in the loss of valuable historical documents. This explains why we know so little about the Monastery during the Byzantine period. After 1581 the monks left the Monastery and settled temporarily in the neighboring Xenophontos Monastery. Rebuilding the monastery required consideration funds, so abbot, Evyenios, travelled to Wallachia in 1587 to raise money. Michael the Brave, Prince of Wallachia donated large amounts of money as well as land to the monastery.

Two more fires in 1622 and in 1891 caused further damage. Most of the monastery’s documents, books and manuscripts were destroyed in the fire, while the most recent fire burnt down the Katholikon and the library. After tremendous efforts by the monks in recent years to reorganize and enrich the library, the library now holds about 32,000 volumes of printed scientific books. The monastery was rebuilt after the fire of 1891 to its current form, with funds of the Russian Tsars. The katholikon is dedicated to the Birth of Christ and contains certain parts of the old building. The western building was erected, following the 1580 fire, while the eastern following the 1891 fire. The monastery nowadays features 8 chapels inside, 4 outside and 7 cells in Κaryes. The choir of Simonopetra has grown in reputation among Byzantine music specialists and enthusiasts with most popular Byzantine chant, Agni Parthene.