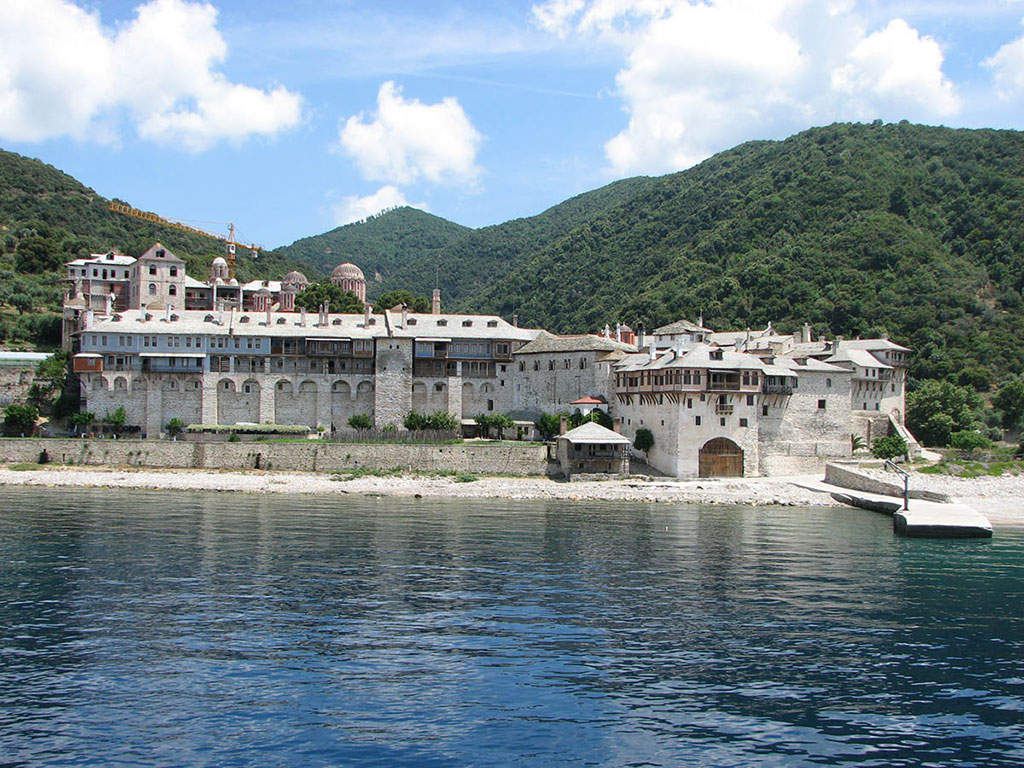 The Monastery Xenophontos celebrates on the day of Agios Georgios on the 23th of April. It was founded by Saint Xenophon in the 10th century. The Monastery is located in an even location near the sea and close to the Monasteries of Dochiariou and Panteleimonos. It is the 16th in hierarchy among the monasteries of Mount Athos.

It is first mentioned in official documents in 1033 even though there are indications that the first reference to the Monastery was made in 998. Emperor Vasilios II added to it the Monastery of Ieromnimonos. From documents of Xenophontos we are informed that around 1083 an admiral, friend of emperor Nikiforos III Votaniatis, became a monk there and he offered all his belongings therefore helping considerably to the extension of the buildings. In 1225 pirates looted and destroyed a big part of the monastery and a decade later there were more attacks by the crusaders. In 1817 it was burnt and then renovated by its abbot Philotheo. In 1794 with a seal of Patriarch Gavriel the monastery of Xenophontos was declared a commune community.

The 'old' Katholikon nowadays is part of the monastery's population. Murals painted by the Cretan painter Antonios in 1544 have been preserved and on the arch there is an inscription of the date 1545 which states the renovation of the temple. The construction of the 'new' Katholikon began in 1809 and was completed in 1819. There is a marble iconostasis and the collection of portable pictures is temporarily kept in the temple. The corridor between the Katholikon and the Prothesis is decorated with murals.An inscription mentions as donors the ruler of Wallachia Ioannis Matthaios and his wife Eleni Vessarava.

The murals of the old Prothesis date back to 1575 but they were repainted in 1640. At the 'new' Katholikon there are also two mosaic pictures of Agios Dimitrios and Agios Georgios of the 13th century and the miraculous picture of Panagia the Odigitria, a copy of the picture that was destroyed at the Monastery of Chora during the Occupation of Constantinople. The picture originally belonged to the Monastery of Vatopedi but then it passed to Xenophontos in 1730. The Monastery owns 14 chapels, 8 of which are inside and 4 of them are decorated with murals.Xenophontos also owns the Sketi of Evaggelismos and 20 Kalyves.

In the sacristy there are many portable pictures, crosses, functional utensil, relics, canonicals and a piece of the Holy Wood. Among the relics is the picture of Transfiguration which is made by wax and mastic. 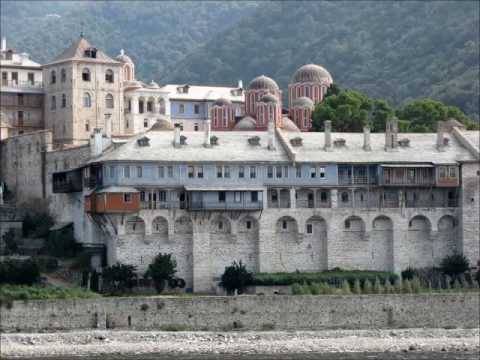