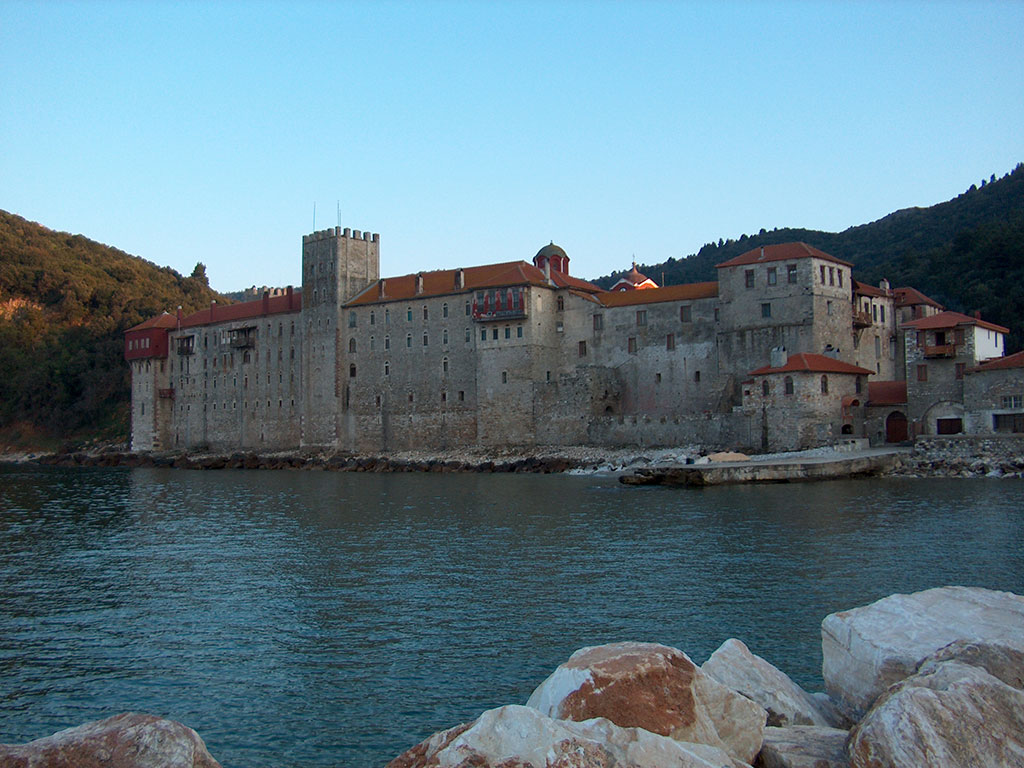 The famous and impressive monastery of Esphigmenou is located on the north east coast near the Monastery of Hilandariou. Some say, its name originates from its position, as it is squeezed in, as it seems by two mountains (Sphigmeno in Greek means to squeeze).  Some others say that its name originates from its founder a monk who had a tight rope around his waist. According to tradition, the monastery, (which celebrates the Ascension of Christ) was built by Theodosius the Micros and his sister, Empress Pulcheria (408-450) who was Marciano's wife. The monastery was later destroyed by a huge rock which fell from the mountain. The ruins of the old monastery are situated half a kilometer away.  The new monastery was built at the end of the 10th century or at the beginning of the 11th century by the monks of the old monastery.

The first written document for the monastery is a letter from Paul the Xeropotamite written in 1001.  For a short period in the 14th century, the abbot of the monastery was the eminent hermit and theologian Gregory Palamas, who later became Archbishop of Thessaloniki. Twice in the 16th century, pirates destroyed and plundered the monastery but it was rebuilt. In the 17th century the monastery fell into a decline, but during the years of the Russian king Alexander Michaelovits, it received many contributions from Russia as well as from other Orthodox Christians which helped the monastery's renovation.

In 1705, Gregory Melenikiou became a monk, giving life to the place. Half a century later Daniel from Thessaloniki was appointed commissioner of the monastery after he had won the approval by Patriarch Gerassimos and the 'Sacred Gathering.'  After his appointment he transformed the monastery into a cenobitic one. During the Greek revolution of 1821, the Turks did great damage to the monastery. In the period from 1850 to 1858, new cells were built. In the main church, the catholikon, there are 9 chapels. The famous monk Anthony Petserski, founder of the famous Lavras monastery in Kiev, lived at the Esphigmenou monastery in 11th century.  Moreover, he applied the monastic customs of Greece in his country and he became founder of the Russian monastic movement.  Today, he is honored as a saint.

The library contains 320 handwritten codices, 75 of which are of parchment. Among them, one is erased and rewritten. Several of the codices have excellent miniatures (like the code number 33 which has miniatures from the 11th century). The library also has 2500 prints. The monastery's treasure collection consists of the cross of Pulcheria, an excellent mosaic icon which dates back to the 13th century, sacerdotal vestments, portable icons, liturgical objects, sceptres, crosses, relics of saints, several valuable documents and others.

It is considered as one of the most strict cenobitic monasteries of Athos. The monastery is known for its stand against Ecumenism. The Monastery never changed, and since 1924, has not commemorated any of the innovator and ecumenists Patriarchs. Its last three abbots, have been recognized as holy saints by all on Mount Athos. The present abbot Archimandrite Methodios, was hand-picked by the last abbot, to lead this monastic stronghold of ascetical Orthodoxy.