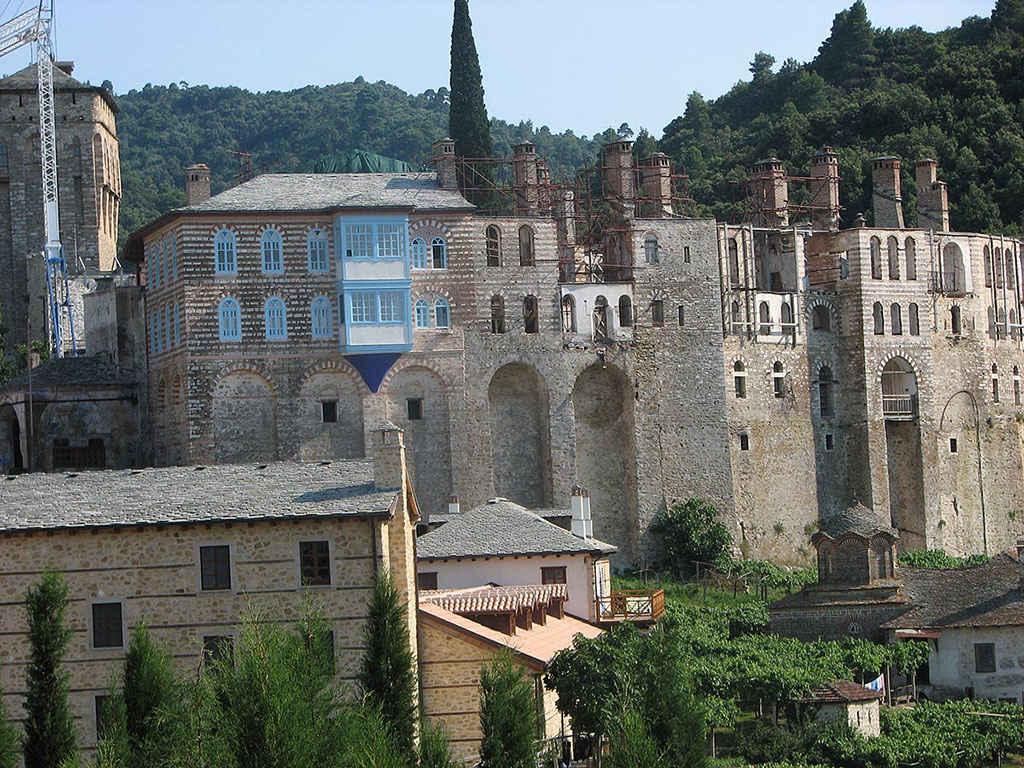 The Monastery Helandariou or Hilandariou celebrates on the 21st of November the Presentation of Virgin Mary. The founder of the Monastery -from which it was named after- hermit Grigorios Helandaris who, in around 980, built a small church and a home for himself and some monks, at the same place where the monastery is situated today. The Monastery of Helandariou is located on the northeast side of Mount Athos in a valley filled with trees at an altitude of 50 meters and a 45' distance from the sea and from Karies. It is a Serbian monastery and it is 4th in hierarchy among the monasteries of Mount Athos. Subsequent founders are also considered the Serbs royals Ratsko and Stephano I Nemanja who were previously monks in the monastery of Vatopedi and were named Agios Savvas and Agios Simeon respectively (12th century).

The Monastery flourished during the 13th and 14th century and in the middle of the 16th century a school of Serbian literature prospered which however later began to decline in the 17th century. In 1722 the monastery was destroyed almost completely from fire. In 1676 when the archdiocese Ipekiou merged into the Ecumenical throne, the Serbs monks left. But they prevailed again in 1896 after the visit of the King of Serbia Aleksandros I who was responsible of the renovation of the Monastery and the repayment of its debts.

The Monastery of Helandariou honors the Virgin Mary as Abbess as well from the time when the monks tried to put the image of Panagia Triherousa at the iconostasis of the Katholikon and the holy picture disappeared and reappeared at the throne of the abbot.

The Katholikon of the Monastery is devoted to the Presentation of the Virgin Mary (21st November) and was founded in 1293 by Stephen Urosch Milutin. His murals were painted in 1319 or 1320 and were repainted in 1803. The stoup in the middle of the courtyard was constructed in 1784 and it was painted in 1847 by the painter Makarios. Behind the throne of the abbot is the tomb of St Simeon. One day from the tomb of the saint a grapevine grew which flourishes until today and it is said that it can treat sterile women. The Monastery of Helandariou owns 9 chapels within and 8 outside as well as the attached monasteries Zigos, Agios Vasileios, Komitissis, Kalitsa, Paparnikia, Omologitou, Strovilea, Scorpios and Agios Georgios.

At the old Prothesis frescoes from the 1629 have been preserved which however cover those of the 14th century.

The library contains 700 Slavic manuscripts and 100 Greek ones, 25 Slavic parchments and 27 Greek ones, 7 scrolls from which 2 are Greek, 6.600 printed books 1000 of which are Greek. It also contains more than 400 stamps and documents, among which are the golden seals of Byzantine emperors and an enormous and important collection of books of Serbian literature of past centuries. Finally there are 7 Greek and 5 Slavic very old scrolls.

Among the precious relics and offerings there are five precious stones with characteristics of the Virgin Mary, Christ and Agios Dimitrios from the 12th century and 2 carved wooden crosses containing pieces of the Holy Cross. Other priceless heirloom is the Winding Sheet of Christ and pieces from the thorny wreath, part of the trimmed skull of Prophet Isaias, the right leg of Agios Panteleimonas, the right hand of Nikoforos Patriarchis of Constantinople, part of the remains of Agia Varvara and Agia Ekaterini. Many of the relics were gifts by Serbs kings and Russians tsars. Among the most important relics of the monastery is the miraculous picture of Virgin Mary the "Triherousa" with gold plated trim and with various ancient coins among which are those of Alexander the Great. There are even miraculous pictures of the Virgin Mary: The "Galaktrofousa', the "Ekklisiarchi pedefthasis", the "non-burnt" on the big fire in 1722, the "Akathistos" and the Serbian "Papadiki" (Popskaya).