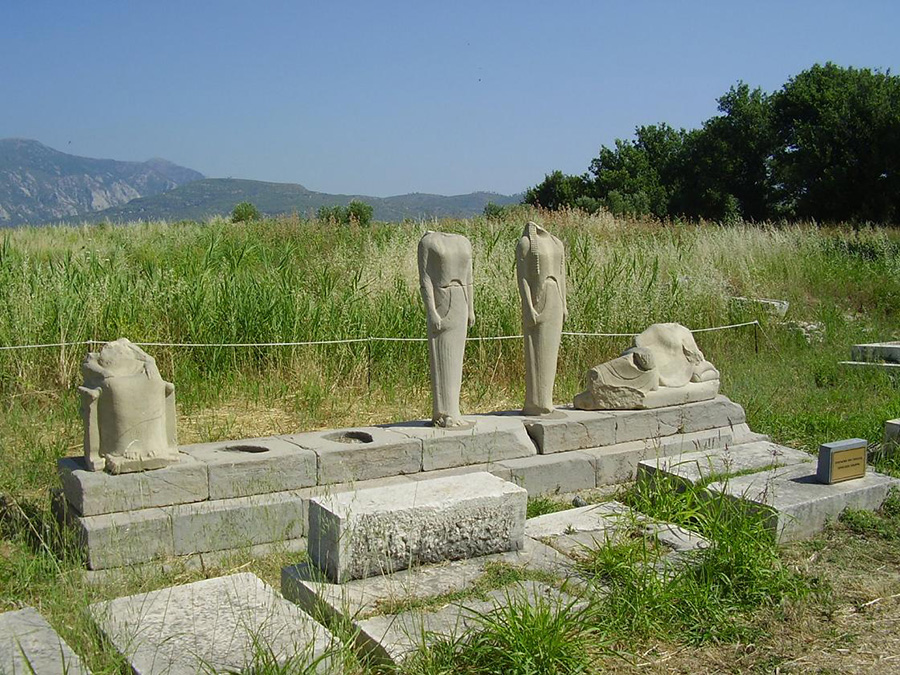 Samos, due to its geographical location in the eastern Aegean, securing easy communications with the coast of Asia Minor, was one of the most important centres of political and cultural developments from the prehistoric era (5th/4th millennium BC) until almost the Middle Ages. The site is an area on the north-east coast of the island that is clearly defined by the surrounding mountains. It consists of the fortified ancient city (Pythagoreion) and the ancient Temple of Hera (Heraion), which is situated about 6 km away from the city and indissolubly linked with it.

The earliest finds date back to the 5th/4th millennium BC, during the Neolithic period, but the main settlement began in the 10th century BC, when it was colonized by Ionians from Mainland Greece. By the 6th century BC, Samos had become a major nautical power in the eastern Mediterranean, with close trade links with Asia Minor and the Mainland Greece. It was strong enough to establish trading colonies on the coast of Ionia, in Thrace, and even in the western Mediterranean.

One of the most famous features is the Eupalinus’ tunnel dating from the 6th century BC, which runs 1036 m through the mountainside to bring water to the ancient city, the work of Eupalinus of Megara, Naustrofus’ son. Samos continued to be an important mercantile city throughout the Hellenistic and Roman periods.

The great Temple of Hera (Heraion) has its origins in the 8th century BC, when it was the first Greek temple to be one hundred feet in length (Hecatompedos). It is unknown if this temple was surrounded by a peristyle of columns; its 7th-century successor was also innovatory in that it was the first temple to have a double row of columns across the front. These were both surpassed by the temple begun around 570-560 BC by Rhoecus and Theodorus, who built a colossal structure measuring 52.5 m by 105 m, the earliest in the new Ionic order. It was supported by at least 100 columns, whose moulded bases were turned on a lathe designed by Theodorus. The works for the construction of a new temple, known as the Great Temple of the Goddess Hera, a colossal structure measuring 55.16 m by 108.63 m, and surrounded by a peristyle of 155 columns about 20 m high, were started during the reign of Polycrates (c. 535-522 BC).

The Heraion and the ancient city were adorned with splendid sculptures, making Samos one of the great centres of sculpture in the Ionic world. Offerings from all over the ancient world poured into the sanctuary of Hera. Samos is linked with great personalities of the ancient world, such as the philosopher and mathematician Pythagoras, the philosopher Epicurus, who was of Samian birth, and Aristarchus the Samian, who first established the theory of the planet system in the 4th century BC.

Pythagoreion and Heraion of Samos bear eloquent witness of the Ionian spirit. During its apogee in the 6th century BC the ancient city of Samos achieved exceptional technical and artistic progress and created innovative methods and works, thus representing a city with a high level of civilization, which merits its inclusion in the Ionian Dodekapolis.

Ionic dipteral temple built during the tyranny of Polycrates (538-522 B.C.).

Herodotus considered this temple as the largest in Greece. It follows almost exactly the contour lines of the cella and the pronaos of the older temple "of Rhoikos" (570/60 B.C.), but it is much larger (108.63 x 55.16 m.). This difference in size is due to the addition of a third colonnade to the front and back of the peristasis, apparently following the example of the temple of Artemis at Ephesus, which had been built slightly earlier. The temple had a total of 155 columns, belonging to four different sizes and types. The entablature must have been made of wood. Since no tiles were found, it is suggested that the roof was never completed.

Very large even in its earlier phases, occupied always the same position. Seven successive phases have been distinguished, of which the earliest, a small structure built of rubble, dates from the Late Bronze Age.

The altar of the 8th/7th century B.C., for unknown reasons (possibly connected with the cult) was not placed on axis to the temple, but was orientated NW / SE.

It acquired its monumental form in ca. 560 B.C., and was almost contemporary with the monumental temple of Rhoikos and Theodoros, placed on its axis. On the basis of the preserved foundations, its size is estimated to 36.50 X 16.50m. The temple opened to the main sacrifical area which was surrounded on three sides by a wall, 5-7m. high.

This was decorated with impressive cymatia, and, on the interior, with a frieze showing fighting animals and sphinxes.The free edges of the two walls bear richly decorated anta capitals.In imperial Roman times (1st-2nd centuries A.D.) the altar was rebuilt of marble, and decorated with copies of the Archaic architectural decoration.

The road leading from the city of Samos (present-day Pythagoreion) to the sanctuary, was an important feature of the landscape already in the beginning of the 6th century B.C., at the latest. Being the main access to the sanctuary, it was adorned with votive monuments closely spaced along its whole length. The colossal marble kouroi, found on the road, and the Geneleos Group (a replica of which has been placed on the north end) give an idea of the magnificence of the site as early as the Archaic period.

The massive stone lining of the road surface, parts of which have been uncovered up to the Pythagoreion, was constructed in about A.D. 200. In 1980, excavations carried out in search of the main entrance to the sanctuary, brought to light the colossal kouros, now exhibited in the Samos Museum. 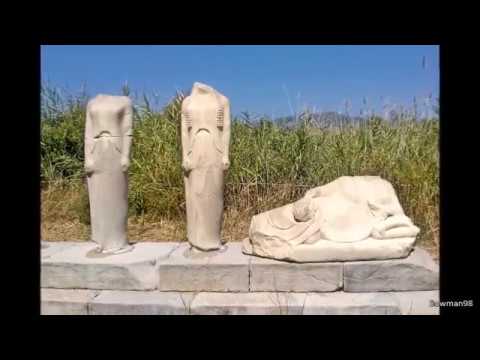