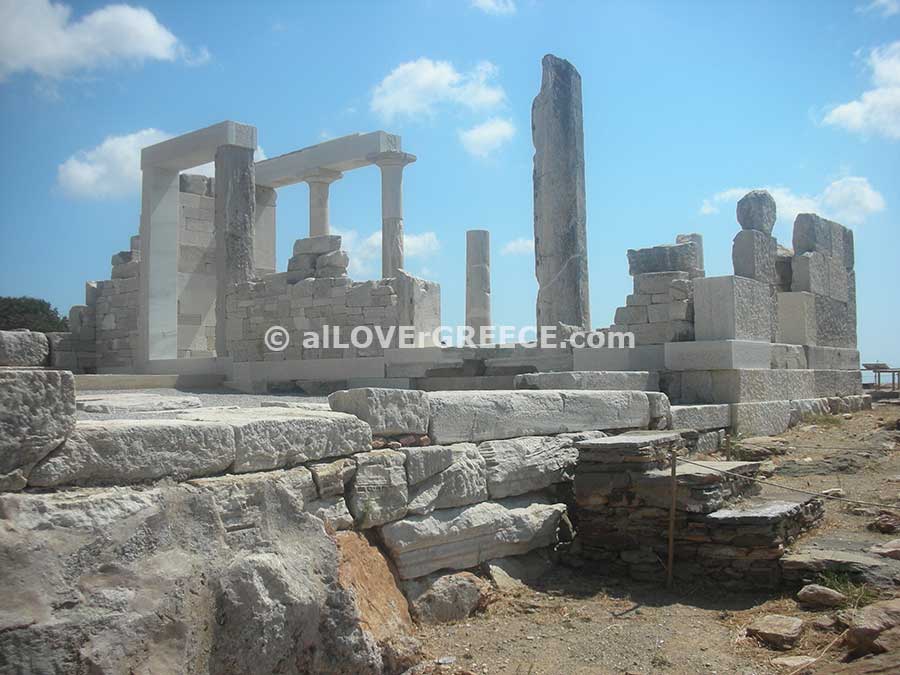 An outdoor worship of deities of nature started in the 8th BC c. on the low hill that dominates the beginning of a fertile plain in the area of ​​Gyroulas, 1.5km south of Sangri. At that place, a temple was built during the late 6th BC c. completely of Naxian marble, overlooking both the sea and mount Zas. The sanctuary according to various inscriptions was dedicated to Apollo and Demeter along with Demeter’s daughter, Persephone. It was built around 530 BC and is one of the earliest Ionic temples. Along with the temple of Yria, are considered by the architectural point of view, as the forerunners of the Athens Parthenon. Although small in size, it is of great significance for the development of Greek temple architecture.

The worship of deities related to fertility and cultivation is justified by the construction of the sanctuary in the midst of a plain, widely cultivated at that time. The ground plan is almost square having five columns on the front facade. It also had a number of columns in the inside that supported the marble roof.

During the Early Christian period (in the 5th - 6th century AD), the ancient temple was largely demolished and a three-naved Christian Basilica was built with many stones of the ancient temple. Until the 8th AD c., when the site was abandoned, various laboratory facilities for the production of oil, wine and ceramics were developed around it. The following years, worship continued in the small one-room church, dedicated to Agios Ioannis, which was built in the arch of the ruined Basilica.

A restoration project has partially reconstructed part of the temple with old and newly cut stones. The project was carried out by the University of Athens in collaboration with the Institute for Building Research in Munich. A few meters away from the archeological site stands the museum that has been awarded for its architecture, as well as the way it blends in with the surroundings. Inside you can find the most important finds from the excavation of the sanctuary, such as parts of the pediment, columns, statues of Kouros and inscriptions as well as other finds that were not used in the restoration.

The remains of the ancient temple of Demeter were discovered by the archaeologist Nikolaos Kontoleon in 1949. The excavation works lasted from 1976 to 1995. Today, the temple of Demeter at Sangrí is undoubtedly one of the most important monuments of Naxos and one of the island's main attractions.