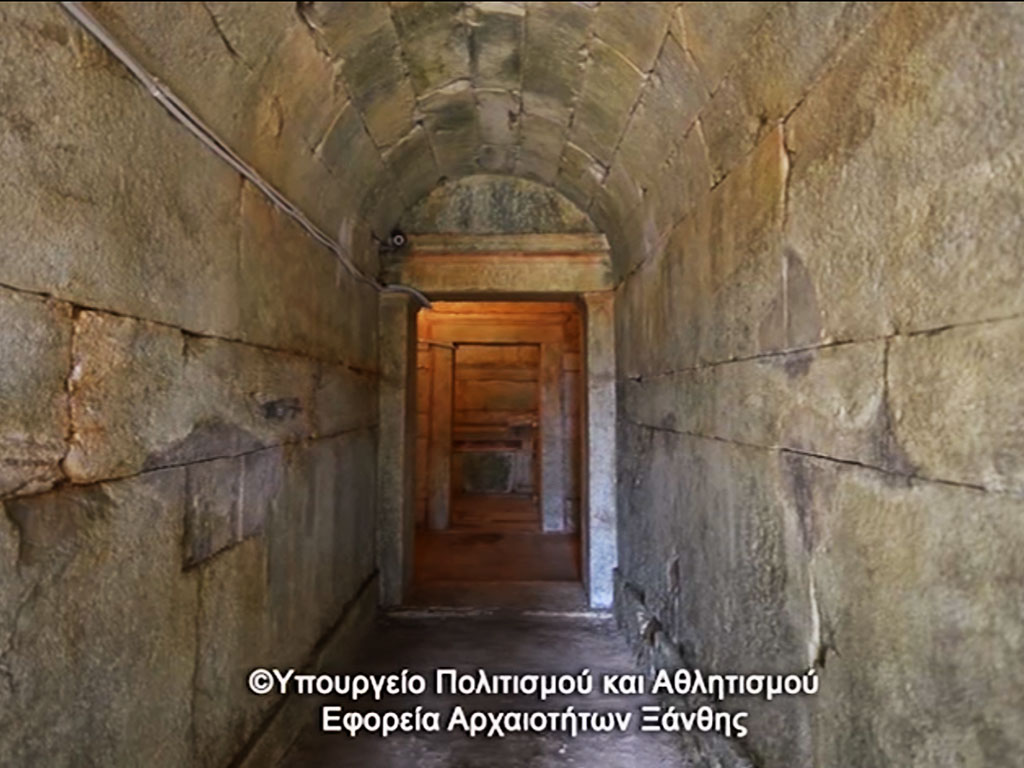 The Macedonian Tomb of Stavroupolis-Komnina, located at a distance of 3km south-east of Stavroupolis, is the largest and best-preserved built tomb in Aegean Thrace. The tomb had already been robbed when it was discovered and excavated for the first time by the archaeologist Haralambos Makaronas, in the 1950s. On the basis of its architectural form and the very few objects recovered (two small finger rings, a small bead from a necklace and fragments of two clay Erotes and three female figures), the tomb was dated to the first half of the 2nd century BC.

The monument has the characteristics of the Macedonian tombs. It is an underground, built tomb, constructed with blocks of local marble, following the pseudo-isodomic masonry style (with squared blocks placed in alternating wide and narrow layers).

The tomb has a dromos (passageway), an antechamber and a main (burial) chamber. Following the external dromos, the visitor is entering the internal dromos, roofed with a barrel vault. The internal dromos, with a length of 4.65m. and a width of 1.59m., was closed externally in the past with large rectangular stones.

During antiquity, one passing through the internal dromos would enter the antechamber, through an entrance closed with marble stones. The entrance has two jambs and a threshold. The first four letters of the greek alphabet (Α, Β, Γ, Δ), written in red on the right jamb, represent the «trade mark» of the masons, who built the tomb.

Special characteristic of the tomb is the roofed dromos and the fact that the encaustic technique has been used to fix the colors directly to the marble, without the use of mortar. Conservation and consolidation work took place in the decades of 1970 and 1990, under the direction of the archaeologist Diamandis Triandaphyllos. The monument has undergone plenty attempts of illegal excavations. Nowadays, the Ephorate of Antiquities of Xanthi is working on the protection, conservation and promotion of the monument.