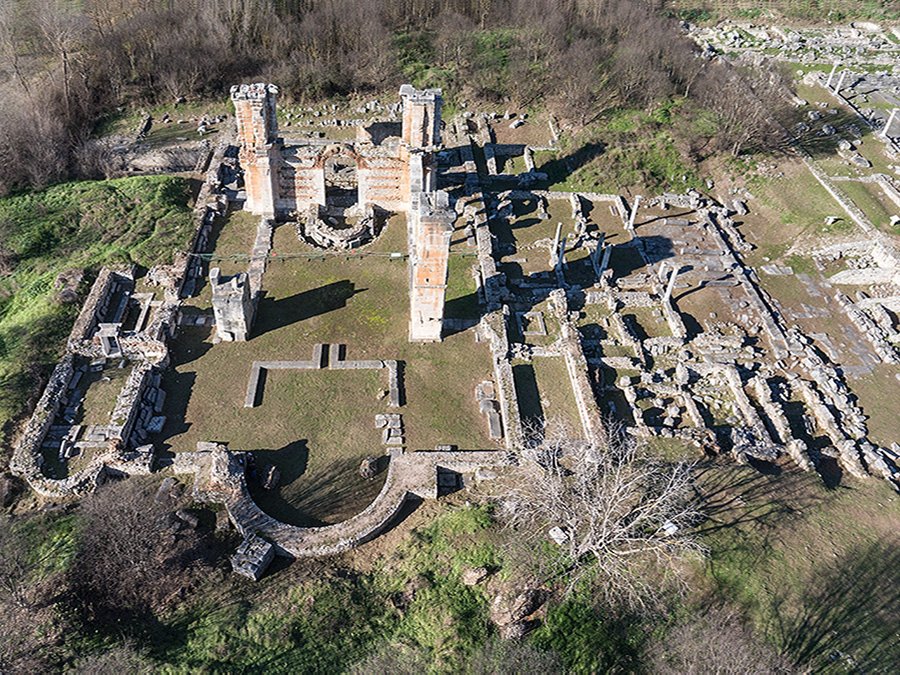 The ancient city of Philippi, now the most important archaeological site in Eastern Macedonia, lies at the boundary of the marshes that cover the southeast part of the plain of Drama. The site was originally colonized by the people of Thasos, who, aware of the area's plentiful supplies of precious metals, timber, and agricultural products, established the city of Krinides in 360 BC. Soon after its establishment, however, Krinides was threatened by the Thracians (365 BC) and turned to King Philip II of Macedon for help. Realizing its economic and strategic potential, Philip conquered, fortified, and renamed the city after himself.

Hellenistic Philippi had a fortification wall, a theatre, several public buildings, and private houses. The construction of the Via Egnatia through the city in the second century BC made Philippi an important regional centre. The dramatic battle of Philippi, which took place outside the west city walls in 42 BC, was a turning point in the city's history. The city was conquered by Octavian and renamed Colonia Augusta Julia Philippensis. The new Roman colony developed into a financial, administrative, and artistic centre.

Another important event marked the city's history a century later. Saint Paul founded the first Christian Church on European soil at Philippi in 49/50 AD. The establishment of the new religion and the city's proximity to Constantinople, the Roman Empire's new capital, brought new splendour. Three magnificent basilicas and the Octagon complex, the cathedral dedicated to Saint Paul, were erected in the city centre in the fourth-sixth centuries AD. After a series of earthquakes and Slavic raids, the lower city was gradually abandoned early in the seventh century. Philippi survived into the Byzantine period as a fortress, until its final demise in the late fourteenth century, after the Turkish conquest.

The archaeological site of Philippi is located west of the modern town of Krinides, on the provincial road connecting Kavala with Drama. The most important monuments in the area are the city walls, the acropolis, the theatre, the forum, Basilica A, Basilica B, and the Octagon.

1. The City Walls and the Acropolis

The 3.5-kilometre-long walls begin at the fortified acropolis on the hilltop and surround the foot of the hill and part of the plain (first building phase: Philip II, mid-fourth century BC; second building phase: Justinian I, 527 - 565 AD). Inside the acropolis is a Late Byzantine tower.

The elements preserved from the first phase, contemporary with the city walls and dated to the time of Philip II, are the retaining walls of the cavea and parodoi and part of the retaining wall of the ramp leading to the east parodos. The stage building was wooden. In the 1st-2nd c. AD the theatre assumed a typical Roman form with the covering of the parodoi, the extension of the seats up to them and the construction of new walls for the parodoi to bear the great loads of the retaining walls.

The stage building had three storeys on the south and two on the north, on the side of the orchestra. The north façade had seven niches and five doorways. On the south front, the lower stoa consists of seven spaces communicating via arched doorways. The south side of the stoa pillars was faced with two rows of marble slabs carved in relief. On the lower row were depicted Maenads and a male figure, probably King Lycourgos of Thrace. The upper row of slabs was decorated with satyr masks, ritual fruitbowls, animals sacred to Dionysus, etc.

During the next Roman phase, in the 2nd-3rd c. AD, the theatre was converted into an arena by introducing several alterations, such as the demolition of the logeion, the raising of the hyposcenium to the level of the orchestra, which thus became larger and circular in shape, the removal of the first two rows of seats of the cavea, and the construction of a stone balustrade and railings to protect the spectators. A subterranean space under the demolished logeion served for the introduction of wild beasts to the arena. The addition of the epitheatre increased the capacity of the theatre. On the arch of the west parodos were carved reliefs of Nemesis, Ares and Nike, deities connected to gladiatorial combat and wild beast hunts. In the late 3rd c. AD the two buttress arches were built, transferring the load of the east retaining wall to the adjacent wall.

According to the excavation data, the theatre ceased to function as a performance area in the late 4th – early 5th c. AD. In Early Christian and Early Byzantine times (5th-6th c. AD), the stoa of the stage and the wider area of the theatre were converted into workshops. Following the destruction of the stage building by fire, probably connected to the great earthquake which destroyed the city of Philippi in the late 6th – early 7th c. AD, the theatre began to be systematically robbed of stone.

The first excavations were undertaken by the French School of Archaeology from 1921 to 1937. In 1957-1962 the Greek Archaeological Service carried out excavation and temporary restoration work in order to make the theatre functional. The 18th Ephorate of Prehistoric and Classical Antiquities (EPKA) undertook preliminary excavations. Excavation and restoration work was carried out from 1994 to 2000, originally with funding from the “Monuments – Performance Areas” programme of the European Commission, and continuing under the 2nd Community Support Framework. During this time, the east retaining wall of the cavea was restored and reconstructed, followed by the reconstruction of the two buttress arches.

Excavation and restoration work has been in progress from 2001 to the present, late 2008. The project is the responsibility of the Credit Management Fund for Archaeological Works (TDPEAE), funded by the 3rd Community Support Fund under the supervision of a scientific committee, headed by Haido Koukouli-Chryssanthaki in 2001-2004 and Zisis Bonias from 2005 onwards. As part of the TDPEAE project, restoration-reconstruction work on the Theatre of Philippi has continued on the stage building, staircases, parodoi, orchestra, epitheatre, paved court and the final phase, on the west retaining wall of the cavea. The section of the east wall of the city adjoining the theatre has also been excavated and cleaned. The excavation and reconstruction programme was completed at the end of 2008, and only the reconstruction of the cavea remains.

The Roman forum, the city's administrative centre in the Roman period, was a unified complex of public buildings positioned around a central square, with two monumental temples at the northeast and northwest. The large paved road that runs north of the forum has been identified as the ancient Via Egnatia.

Basilica A (end of fifth century AD) is a large three-aisled basilica, 130 metres long and 50 metres wide, with a transept, a square atrium, a gallery over the aisles and narthex, and an unusual phiale. Fragments of the luxurious pavement and part of the ambo are preserved in the central aisle. The impressive wall paintings in the chapel's anteroom imitate opus sectile decoration.

Basilica B (ca. 550 AD) is a three aisled basilica with a narthex and annexes to the north and south (phiale and vestry). The almost square central aisle was covered by a dome supported on large pillars, and the sanctuary was vaulted. The sculptural decoration is clearly influenced by Constantinopolitan art.

The so-called Octagon was the episcopal church of Philippi. The church proper presents three building phases (late fourth/early fifth century - mid-sixth century AD). It replaced an earlier smaller church dedicated to Saint Paul (early fourth century), built on the site of a Late Hellenistic tomb-her?on. The complex also comprises a phiale, a baptistery, a bathhouse, a two-storied Episcopal residence, and a monumental gateway towards the Via Egnatia.

The “Jail” of the Apostle Paul is located to the south of Basilica A. Tradition holds that this is the spot where Paul was jailed. In reality, however, it is a Roman water cistern, which was later converted into a place of worship.

Most of the Palaestra has been covered by Basilica B. It included a colonnaded central courtyard, rooms and a small amphitheatre. The best-preserved section is that of the latrines (toilets) in the southeast corner of the building.

The rectangular building (measuring 27 x 10m) that was discovered south of the Forum of the Roman city, with a portico that consisted of a colonnade of six Corinthian columns on its faηade, is being identified by its architectural layout and the inscriptions which were found, as the Roman commercial market (macellum). The complex consisted of a central columned court, right and left of which there were shops.

The complex of the commercial market is separated from that of the Forum with a wide road, 9m wide, the commercial street. It is a building of the Antonines period (second half of 2nd century AD), contemporary with the Forum. In the mid-6th century AD, most of it was destroyed to its foundation in order to create the space that was necessary for the construction of the Basilica B. Only its northern part was kept with the six-column colonnade, which was incorporated by the Byzantine architect into the Basilica forming a monumental entrance to its north aisle. 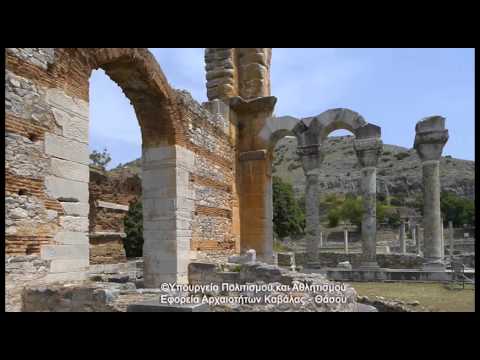