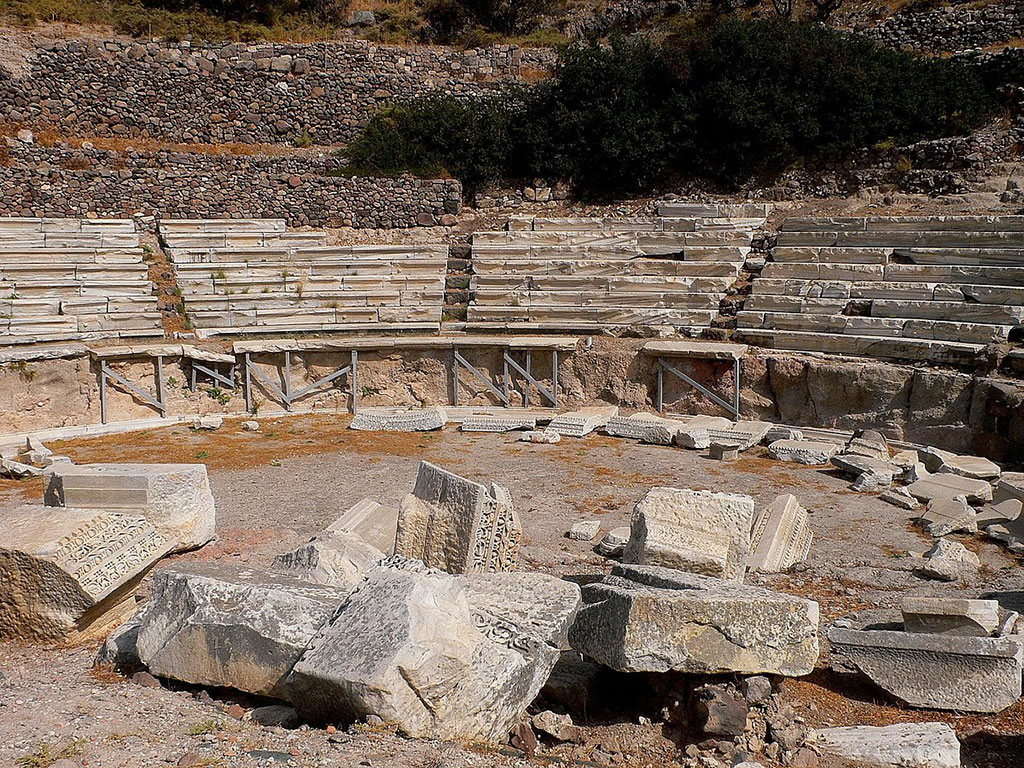 The Ancient Roman Theater of Milos is nestled on a hill, close to the village of Tripiti, facing the south side of the island and the port of Klima. It is a venue of culture and one of the best-preserved ancient theatres in the Cyclades which attracts many visitors each year. The Ancient Roman Theatre was originally constructed possibly during the Hellenistic Age (3rd century BC). After the destruction of the city by the Athenians in Roman times, a bigger one was built on the ruins of the classic theater, made of the world-renowned Parian marble and capable of accommodating an audience of 7,000 people. The portion that has been excavated so far, remains incredibly well-preserved. Along with the orchestra, the stage, seven marble rows and some other parts of the theater have survived and carefully restored.

The monument had been discovered in 1735, still, the first excavations began in 1816 and 1817 by the German architect Carl Haller von Hallerstein, who later bought the theatre on behalf of the heir and future King of Bavaria Ludwig I, who visited Milos in 1836. The monument was later donated to his son, Otto, King of Greece. Excavations are not complete yet, therefore new discoveries could come out in the future.

The ancient theatre of Milos is once again after centuries. still perfectly usable and possible to hold many musical and theatrical performances, its current capacity however is around 700 people. Due to its mesmerizing view and amazing acoustics, it is the perfect place to spend an evening, listening to great music or watching a play of drama. A visit to the Ancient Roman Theater is a must as it is one of the most remarkable historical sites on the island of Milos. It is worth knowning that the famous statue of the "Venus of Milo" also called "Aphrodite of Milo", dating back to the Hellenistic period, was found right in the Ancient Roman Theater in 1820. To date the statue is in the Louvre but a replica of the well-known statue is prominently displayed in the entrance foyer of the Archaeological Museum of the island.

Reaching the Ancient Roman Theater is very simple. It is 2.5 km away from Plaka and 700-meter walk from the Catacombs of Milos. There's a dirt road parking lot available for both sites.