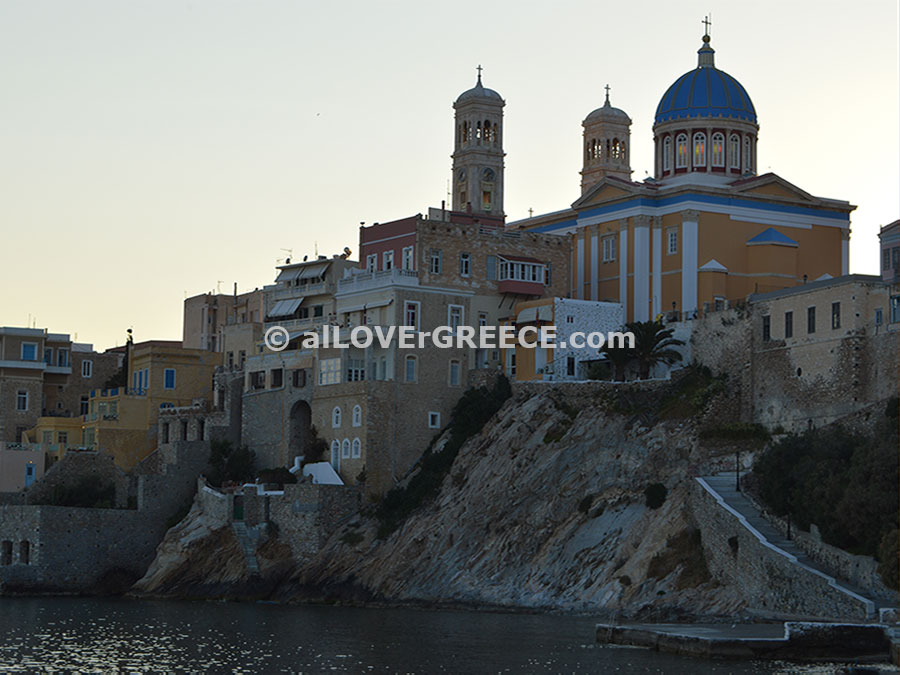 Magnificent temple is the patron saint of Ermoupoli, Agios Nikolaos, located within walking distance from Miaoulis Square and is one of the main attractions of the island. It was founded in 1848 and designed by G. Metaxas and inaugurated in 1870. It is known as Agios Nikolaos ‘the rich’, to distinguish it from Agios Nikolaos of the poor of Ano Syros. The imposing proportions of the two-storey church the high marble belfries, the marble staircase of 4 measures leading to the entrance, the imposing marble porticos with four Ionic columns and the inlay with archaic motifs give Agios Nikolaos monumental ancient character . For its construction was interested personally the King Otto and has contributed many donors to its construction, mainly Greeks of Russia and Chios owners of the island. The silver plating of the icon of Agios Nikolaos was realized in Moscow, in 1852. Internally, arches divide the church into three aisles and a place for women runs in its three sides. Marble Corinthian columns, lintels with relief decoration, tiling in gray color – blue, but above all is impressive its dome. The marble temple of Agios Nikolaos was made in the period 1883-1899 from Tinian sculptor G. Vitalis and is considered one of the finest temples of the 19th century. It stands out also the marble Episcopal Throne, work of the same sculptor and the marble pulpit, pentagonal, work of sculptor of Chios Antony Frangoulis. The icons of Agios Nikolaos are executed by the most important painters of the time.