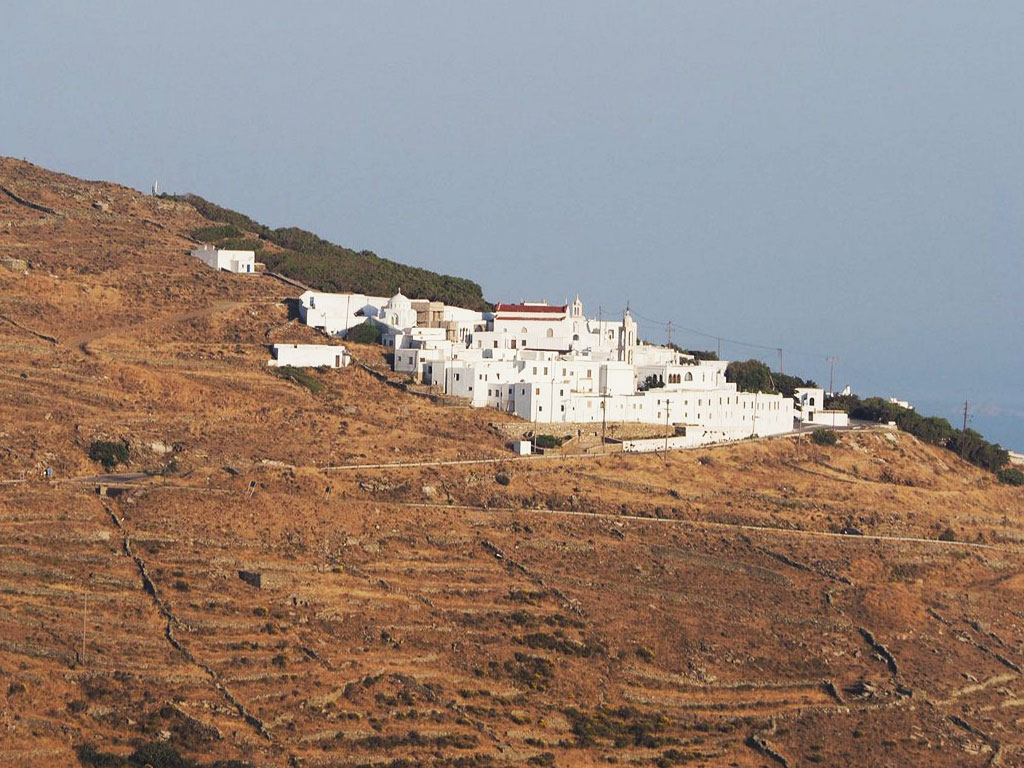 Monastery of the Assumption of the Virgin

This monastery, also known as the Lady of the Angels was built in 10th-11th century, on the slopes of Kechrovouni Mount. From afar resembles a fortified village, featuring whitewashed buildings, narrow paved alleys and several arches. However, this is the monastery that according to tradition was founded by three daughters of a wealthy family, from the village of Tripotamos. The three sisters had a vision of Virgin Mary, showing them the location for the construction of the monastery. They first built three cells which afterwards comprised the convent's central point.

Built at an altitude of 600 m, it offers stunning views of Tinos Town, the nearby villages and the Aegean Sea with the surrounding islands. The complex includes the main church, smaller chapels, auxiliary buildings and the nuns’ cells. It hosts a remarkable library with over 2000 old books and a museum with a great collection of icons of the 18th and 19th century, manuscripts and religious relics. Formerly, hundreds of nuns lived in the convent, but today their number has been reduced significantly. In their free time, they are engaged in embroidery and collect herbs that sell to the visitors in order to make money and keep the monastery in good condition.

A nun named Pelagia had a vision back in 1822, which led to the find of the miraculous icon of the Virgin Mary and to the construction of a church many years later. The icon came to light on January 30th, 1823 and depicted the Annunciation of the Virgin, with the Archangel Gabriel. Saint Pelagia's cell is open to public and worth visiting as it remains unaltered.

Every year on July 23, the icon of the Virgin is transferred from the church of Evagelistria to the convent of Kechrovouni. After the service, the nuns treat their guests to coffee and traditional sweets and following the vesper they all return to Tinos Town, which is eight kilometers away, on foot. The holy icon is carried in the hands of the monks and as they pass quaint chapels, the procession is heralded with church bells.