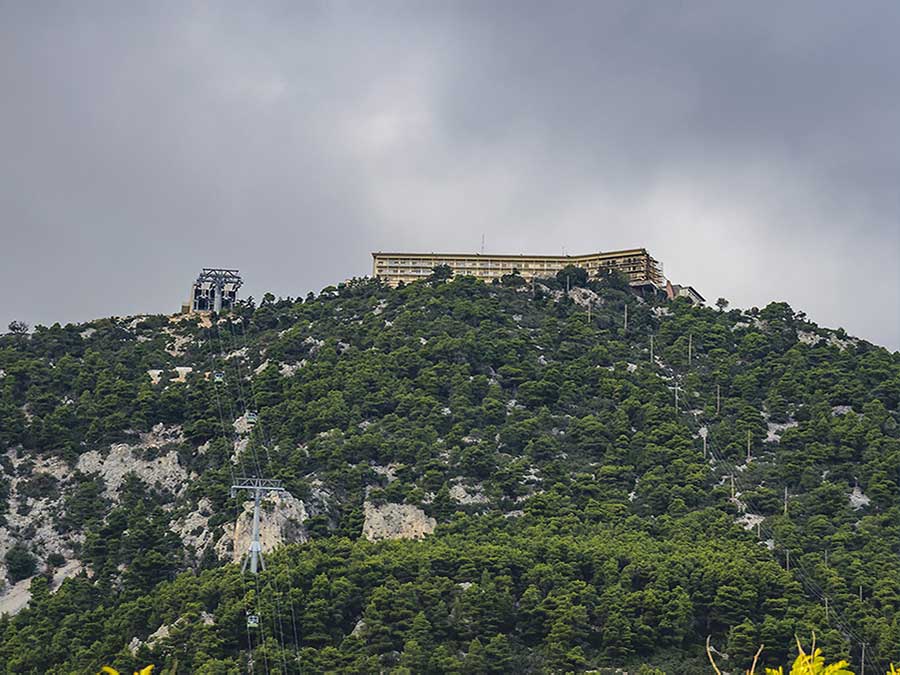 The Mont Parnes hotel, hanging at an elevation of 1055 meters on top of picturesque mount Parnitha, was one of the most interesting buildings of its era. The magnificent inauguration was carried out in 1961, with the presence of the prime Minister at that time, Constantinos Karamanlis who took the initiative for the hotel’s construction.

The hotel’s operation started initially under the authority of HTO (Hellenic Tourism Organization), but during the ‘60s its management changed many times with limited success. The status changed dramatically in 1971 when the first Greek Casino was built at the Mont Parnes facilities operating together with a hotel.

The ‘70s was the golden era of Mont Parnes with exceptional guests, an aristocratic atmosphere and glittering, luxurious facilities.

All the good society of Athens and not only was in Parnitha, so the dress code was extremely formal, and in order for someone to enter the casino, he would have to show a tax declaration with an income of more than 150 thousand drachmas, a very large amount for the time.
Shipowners, businessman, industrialists and politicians often attended the Mont Parnes Casino. Since the mid-80s, the gradual decline began, until 2000 was closed for three years. In 2003, he reopened under the hood of Regency Entertainment and has been operating normally and without problems since then.
You must be over 21 years of age to enter. To register, you only need a European ID card or valid passport.
Regency Casino Mont Parnes it is located in the heart of the Parnitha National Forest and just 17 kilometres from the centre of Athens.
For your transportation you can use the special company buses that set off from the centre of Athens and Piraeus and offer free, comfortable access to the casino facilities. For informations about the departure schedule click here.
By car just follow the route via the Athens-Lamia National Road. At the exit for Metamorfosi, turn left at the bridge where the road will take you to the foot of Mount Parnitha. The convenient parking area at the cable car’s lower station can accommodate 1,500 cars.
By taxi the cost from the centre of Athens is about €15.