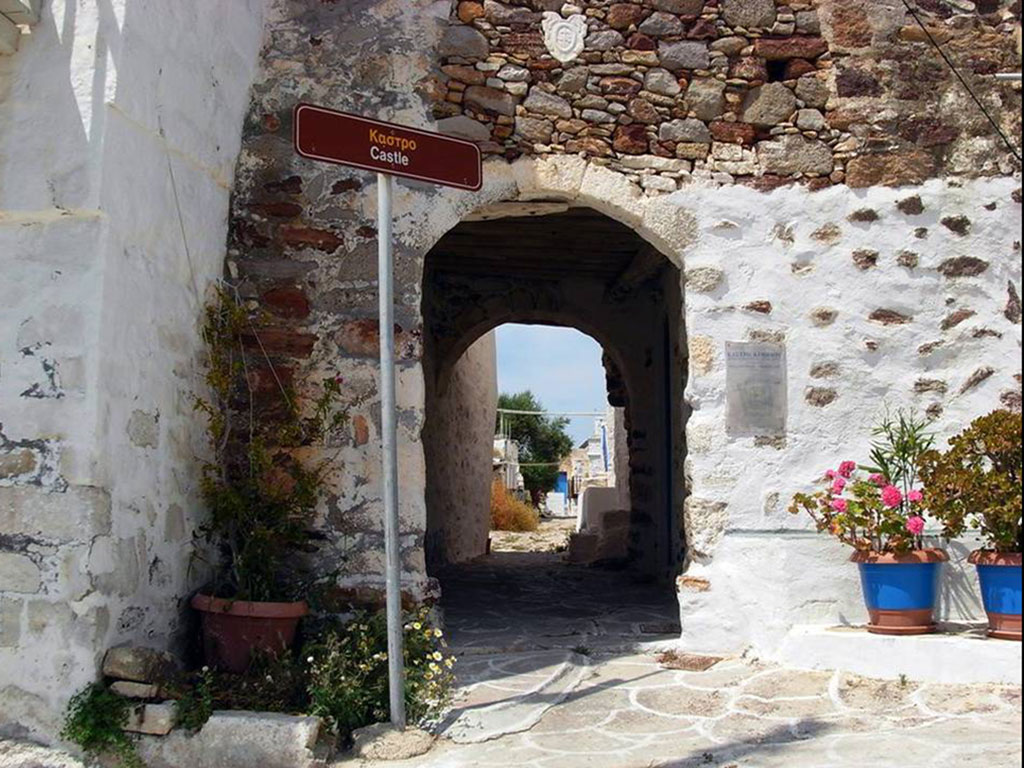 Once a refuge for the local population to escape pirates, now the castle is abandoned, nevertheless, it is still a major tourist attraction. Built in the 14th or 16th century, is a typical island citadel to remind the Venetian past of the island. The castle has a square shape and consists of two house complexes and a small series of houses in the center. The outer complex is the so-called Exo Kastro (Outer Castle) and the inner complex the so-called Mesa Kastro (Inner Castle) with a small narrow road running among them. The road was so narrow that only small carts could pass through. The castle is similar to other Venetian fortified settlements of the first half of the 15th century, situated on other Cycladic islands.

In 1027, Kimolos became part of the Duchy of Naxos under the Venetian Marco Sanudos. In 1537, the island was looted by the Turkish pirate Hayredin Barbarossa, however, this did not end the Venetian rule, but the island had to pay an annual tribute to the Sultan. It is assumed that the castle in its present form was formed in the 16th century by shipowner Ioannes Rafos, probably to accommodate sailors and their families. His name can be found in many inscriptions placed in different parts of the castle. In 1638, the island was looted again and the castle was destroyed.

The houses of the castle were stuck to each other and their outer walls formed the castle's wall. At the center, there was a small cluster of houses and next to it a small square with the church of the Nativity of Christ. The castle had 123 two storey houses, hosting one family on the upper floor and another on the ground floor. Unfortunately, Mesa Kastro is now in ruins. The Outer Castle also consisted of a series of houses, whose external walls were part of the castle’s defensive wall. Many of the houses had lintels with coats of arms and dates. The Outer Castle had two gates: The Lower Gate on the south and the Upper Gate on the eastern side, next to the Folklore and Maritime Museum. The dates 1650 and 1646 are respectively inscribed on the two gates. Obviously, these are the dates of the restoration of the castle after the looting of 1638. After the attack the castle was strengthened with more towers. There were also two gates to enter the Inner Castle. Kastro was once the only settlement in the island and after the liberation from the Turks it extended over the surrounding area, forming the current village known as Chorio.