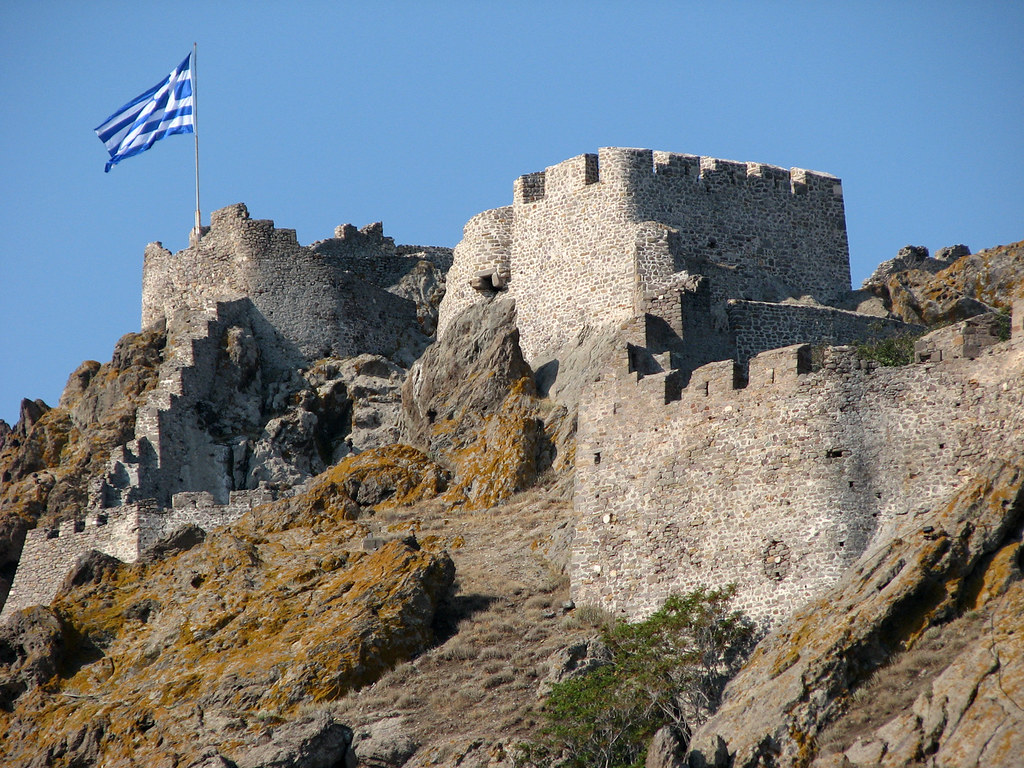 An ancient and byzantine castle that was reconstructed by the Venetians in the 13th century. Built on a rocky peninsula above the port of Myrina, the capital of Lemnos.
It is the largest castle in the Agean.
History
There was an ancient acropolis on the rock since the 13th century BC. The medieval castle was first built by the Byzantines in the beginning of the 12th century. A lot of materials came from the acropolis which disappeared. In 1085, Emperor Andronikos I Komnenos ordered the reinforcement of the castle.
Following the dissolution and division of the Byzantine Empire after the Fourth Crusade, Lemnos was apportioned to the Latin Empire, and given, in 1207, as a fief to the Venetian Navigajoso family under the megadux Filocalo Navigajoso. Filocalo died in 1214, and was succeeded by his son Leonardo and his daughters, who partitioned the island into three fiefs between them. Leonardo retained the title of megadux of the Latin Empire and half the island with the capital, "Kastro".

Leonardo died in 1260 and was succeeded by his son Paolo Navigajoso, who resisted Byzantine attempts at reconquest until his death during a siege of the island by the Byzantine admiral Licario in 1277. Resistance continued by his wife, but in 1278 the Navigajosi were forced to capitulate and cede the island back to Byzantium.
During the last centuries of Byzantium, Lemnos played an important role in the recurring civil wars of the 14th century. Following the Fall of Constantinople to the Ottomans in 1453, the island was added to the domain of the Gattilusi of Lesbos, but following the fall of the Despotate of the Morea, Sultan Mehmed II conquered the islands of the North Aegean too and gave Lemnos as a domain to the brother of Thomas, last legitimate Despot of Mystras (and his ally) Demetrios Palaiologos, in 1462.

The island then fell under Venetian control. In 1476, the Venetians and the island's Greek inhabitants successfully defended Kotsinos against a Turkish siege, but the island was ceded to the Ottomans by the 1479 Treaty of Constantinople which ended the First Ottoman-Venetian War.

During the Sixth Ottoman-Venetian War, after a major victoy in Dardanelles over the Ottoman fleet, the Venetians captured the island again on 20 August 1656, but the Turks recovered it barely a year later, on 31 August 1657, after a siege of 36 days.

In 1770, Kastro was besieged by Count Orlov during the Russo-Turkish War of 1768–1774, during the so-called Orlov events.. The walls of the castle were severely damaged in that siege. In 1780, Hasan Gatzi pasha repaired the castle and equipped it with 150 canons.
On 8 October 1912, during the First Balkan War, Lemnos became part of Greece. The Greek navy under Rear Admiral Pavlos Kountouriotis took it over without any casualties from the occupying Turkish Ottoman garrison, who were returned to Anatolia. Lemnos became a forward anchorage for the Greek fleet, which enabled it to keep watch on the Dardanelles and prevent a foray by the Ottoman Navy into the Aegean. It was a crucial factor in the victory in the Balkan Wars. Lemnos was the main military base of the allied forces in the ill-starred Gallipoli campaign against the Turks in WW I.
Structure, Fortification & Buildings
The castle covers an area of 144,000 sq. meters. It is surrounded by a triple curtain wall with 14 towers. The height of the walls is 8m max. and their thickness 1.5m.
Source: Kastrologos 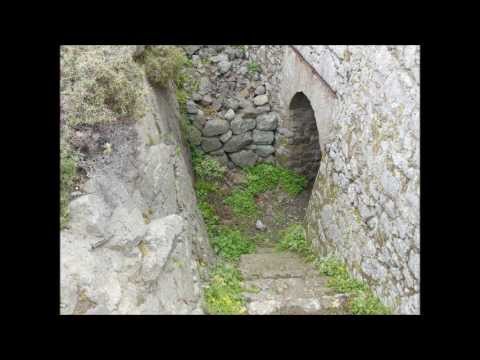