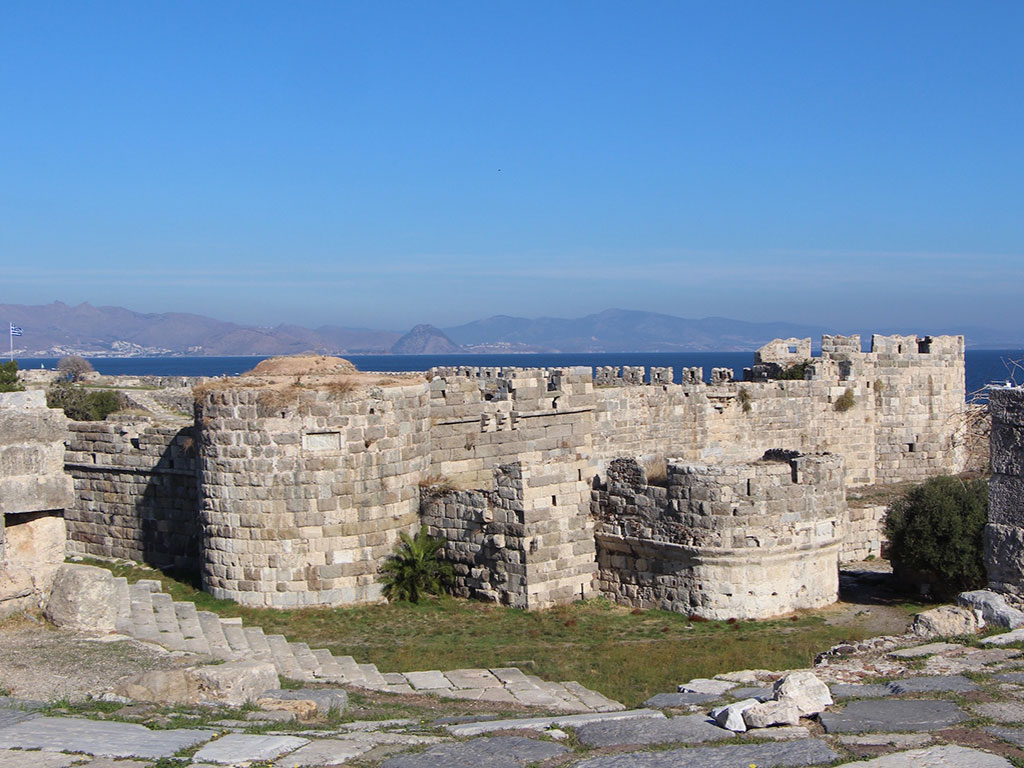 The Castle of Nerantzia (or Castle of the Knights) is at the port of Kos and dominates over the city. It was built in the 15th century by the Knights of Rhodes for the fear of the Ottomans.
The place in ancient times was a small islet, connected with the island of Kos by a bridge, the one seen today at Phoinikon Street.
History
The Castle of Nerantzia (or Castle of the Knights) was built by the Knights of Rhodes (or the knights of the Order of Saint John), for the fear of the Ottomans. The knights had captured the island, together with the rest of the Dodecanese, since 1315.
The building started in 1436 and was completed in 1514. It was constructed with local stone and with the remains of ancient constructions and buildings. It still shows a number of blazons on the masonry, some columns, bases and architraves from the ruins of the old city and the Asklipion.
In 1522 the knights of St. John lost the island to the Turks. The Turks made several additions to the buildings of the castle. These additions were all demolished by the Italians, who took the island in 1912.
Structure, Fortification & Buildings
The interior precinct seems to be the oldest part, built in the times of the ruthless attacks of Sultan Bayazit. The other precinct, in the exterior area, dates from 1495 and was subsequently built by Grand Master D’ Aubusson, Grand Master D’Ambroise, and then finished in 1514 by Del Carreto.
The oldest tower, the one on the left of the drawbridge, still shows the blazons of Grand Master De Milly (1454 - 1461), and Grand Master De Lastic (1437 – 1454). Since the construction of the Knight's Castle took about 130 years, the influence of the different architecture styles is apparent, as it is still possible to see a frieze depicting a number of garlands and masks from Hellenistic times contrasting with the oblique basalt columns on the gates’ ceiling, known as Carmadino gate, dating from the Christian times of Limenos Basilica.
Source: Kastrologos