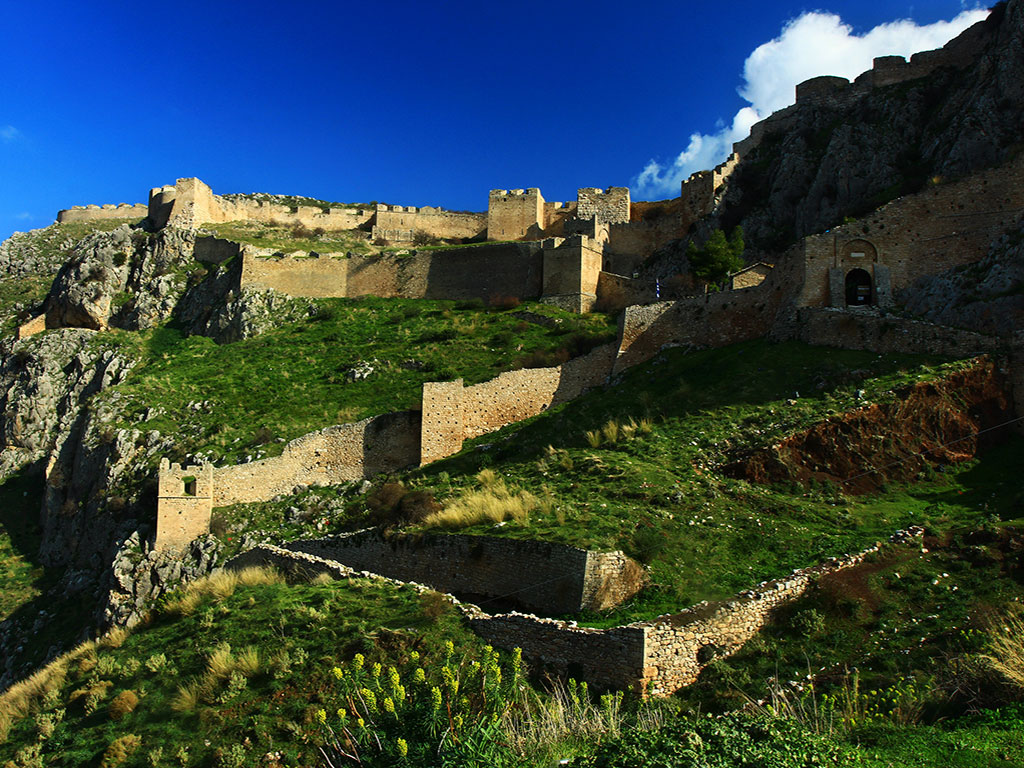 An ancient castle on a 575m high rock. At the foot of the hill is Ancient Corinth. Its perimeter walls total approximately 3,000 metres in length, making it the largest fortress in the Peloponnese and one of the most important in the region, strategically situated at the entrance to the Morea.
History
Acrocorinth is a typical example of castle architecture built in successive phases, as it was the fortified citadel of both ancient and medieval Corinth. Three successive defensive walls lead via an equal number of gates to the interior, covering 240,000 square metres, where building ruins of all periods still survive. A two-storey keep and enclosure built by the Franks on the south-west side of the castle was modified under Ottoman rule.

The first phase in the history of the walls dates to the 7th-6th century BC, which was a time of prosperity for the city of Corinth. The next important phase dates to the 4th or the first half of the 3rd century; in 146 BC the walls were destroyed by the Roman Lucius Mummius. Justinian is believed to have carried out repair works in the 6th century, and substantial efforts at fortification were made in the Middle Byzantine period (8th-12th c.).

When the castle was taken by the Franks in 1210, its defender Leo Sgouros chose to commit suicide by leaping off the walls on horseback rather than to surrender. Over the following centuries numerous repairs and improvements were made, by both the Franks and the Palaeologi, at a time when the city of Corinth seems to have moved inside the castle. Works were also carried out by the Ottoman conquerors (1458-1823), and by the Venetians, who reinforced parts of the walls during the second Venetian occupation (1687-1715).

The interior of the castle still contains the ruins of the temple of Aphrodite (5th-4th century BC), the spring of Ano Peirini, several Christian churches, a Byzantine underground cistern, mosques, fountains etc.
Source: Kastrologos