Today’s visitors to Greece have the opportunity to trace the “fingerprints” of Greek history from the Paleolithic Era to the Roman Period in the hundreds of archaeological sites, as well as in the archaeological museums and collections that are scattered throughout the country.

The first traces of human habitation in Greece appeared during the Paleolithic Age (approx. 120000 - 10000 B.C.). During the Neolithic Age that followed (approx. 7000 - 3000 B.C.), a plethora of Neolithic buildings spread throughout the country. Buildings and cemeteries have been discovered in Thessaly (Sesklo, Dimini), Macedonia, the Peloponnese, etc.

The beginning of the Bronze Age (approx. 3000-1100 B.C.) is marked by the appearance of the first urban centers in the Aegean region (Poliochni on Limnos). Flourishing settlements were found on Crete, Mainland Greece, the Cyclades and the Northeastern Aegean, regions where characteristic cultural patterns developed.

At the beginning of the 2nd Millennium B.C., organized palatial societies appeared on Minoan Crete, resulting in the development of the first systematic scripts. The Minoans, with Knossos Palace as their epicenter, developed a communications network with races from the Eastern Mediterranean region, adopted certain elements and in turn decisively influenced cultures on the Greek mainland and the islands of the Aegean.

On Mainland Greece, the Mycenean Greeks – taking advantage of the destruction caused on Crete by the volcanic eruption on Santorini (around 1500 B.C.)- became the dominant force in the Aegean during the last centuries of the 2nd Millennium B.C. The Mycenean acropolises (citadels) in Mycenae, Tiryns, Pylos, Thiva, Glas, Athens and Iolcus, then comprised the centers of the bureaucratically organized kingdoms.

The extensive destruction of the Mycenean centers around 1200 B.C. led to the decline of the Mycenean civilization and caused the population to migrate to the coastal regions of Asia Minor and Cyprus (1st Greek colonization).

The Archaic Years that subsequently followed (7th - 6th Century B.C.) were a period of major social and political changes. The Greek City-States established colonies as far as Spain to the west, the Black Sea to the north and N. Africa to the south (2nd Greek colonization) and laid the foundations for the acme during the Classical Period.

The Classical Years (5th - 4th Century B.C.) were characterized by the cultural and political dominance of Athens, so much so that the second half of the 5th Century B.C. was subsequently called the “Golden Age” of Pericles. With the end of the Peloponnesian War in 404 B.C., Athens lost its leading role.

New forces emerged during the 4th Century B.C. The Macedonians, with Philip II and his son Alexander the Great, began to play a leading role in Greece. Alexander’s campaign to the East and the conquest of all the regions as far as the Indus River radically changed the situation in the world, as it was at that time.

After the death of Alexander, the vast empire he had created was then divided among his generals, leading to the creation of the kingdoms that would prevail during the Hellenistic Period (3rd - 1st Century B.C.). In this period the Greek City-States remained more or less autonomous, but lost much of their old power and prestige. The appearance of the Romans on the scene and the final conquest of Greece in 146 B.C. forced the country to join the vast Roman Empire.

During the Roman occupation period (1st Century B.C. - 3rd Century A.D.), most of the Roman emperors, who admired Greek culture, acted as benefactors to the Greek cities, and especially Athens.

Christianity, the new religion that would depose Dodekatheon worshipping, then spread all over Greece through the travels of Apostle Paul during the 1st Century A.D. The decision by Constantine the Great to move the capital of the empire from Rome to Constantinople (324 A.D.), shifted the focus of attention to the eastern part of the empire. This shift marked the beginning of the Byzantine Years, during which Greece became part of the Byzantine Empire.

After 1204, when Constantinople was taken by Western crusaders, parts of Greece was apportioned out to western leaders, while the Venetians occupied strategic positions in the Aegean (islands or coastal cities), in order to control the trade routes. The reoccupation of Constantinople by the Byzantines in 1262 marked the last stages of the empire’s existence.

The Ottomans gradually began to seize parts of the empire from the 14th Century A.D., and completed the breakup of the empire with the capture of Constantinople in 1453. Crete was the final area of Greece that was occupied by the Ottomans in 1669.

Around four centuries of Ottoman domination then followed, up to the beginning of the Greek War of Independence in 1821. Numerous monuments from the Byzantine Years and the Ottoman Occupation Period have been preserved, such as Byzantine and Post-Byzantine churches and monasteries, Ottoman buildings, charming Byzantine and Frankish castles, various other monuments as well as traditional settlements, quite a few of which retain their Ottoman and partly Byzantine structure.

The result of the Greek War of Independence was the creation of an independent Greek Kingdom in 1830, but with limited sovereign land.

During the 19th C. and the beginning of the 20th C., new areas with compact Greek populations were gradually inducted into the Greek State. Greece’s sovereign land would reach its maximum after the end of Word War I in 1920, with the substantial contribution of then Prime Minister Eleftherios Venizelos.

The Greek State took its current form after the end of World War II with the incorporation of the Dodecanese Islands.

In 1974, after the seven-year dictatorship period a referendum was held and the government changed from a Constitutional Monarchy to a Presidential Parliamentary Democracy, and in 1981 Greece became a member of the European Union.

Greece is a country in southern Europe, located at the crossroads of Europe, Asia and Africa. The mainland is located on the southernmost tip of the Balkan Peninsula and is bounded on the north by Albania, Northern Macedonia and Bulgaria; on the east by the Aegean and Turkey, on the south by the Mediterranean, and on the west by the Ionian and Italy.

The country consists of a large inland and two additional smaller peninsulas protruding from it, Chalkidiki and the Peloponnese, which is separated from the mainland by the Isthmus of Corinth. Greece also has a large number of islands of various sizes, such as Crete, Euboea, Rhodes and Corfu, as well as smaller groups such as the Dodecanese and the Cyclades. Greece has a coastline of 13.676 kilometers, the largest in the Mediterranean basin.

Greece as a peninsula is surrounded by sea. Its main feature is the rich partition of its beaches and many islands. They have bays, peninsulas, capes and islands in such a proportion that we do not find it in any other country. The coastline of Greece is 13.676 kilometers. Greece with its islands is dotted with the Mediterranean. The following high seas are formed: Ionian, Myrtoo, Aegean, Thracian, Ikarian, Cretan, Carpathian and Libyan.

Big and small islands (3000) are scattered throughout our seas. Most are found in the Aegean Sea. In total, there are 151 islands, inhabited. Many other small islands are uninhabited and have an area of 348 km. The largest islands are Crete, Euboea and Rhodes. The islands are made into larger clusters. These clusters are: 1. Ionian Islands (Corfu, Ithaca, Lefkada etc.), 2. Myrtoo Islands (Kythira-Antikythera), 3. Northern Sporades (Skopelos, Skyros, Skiathos etc.), 4. Euboea , 5. Aegean Islands (Lesvos, Chios, Samos, Cyclades, Dodecanese, Saronic, Argolic Islands etc.), 6. Crete.

The highest mountain in Greece is Mount Olympus, at a height of 2.917 m. There are several plains, valleys and plateaus between the mountains. Somewhat more extensive are the plains of Thessaly, Thessaloniki, Eastern Macedonia and Thrace. However, other smaller plains, such as Arta, Agrinio, Boeotia, Argos and other smaller ones, are relatively fertile.

The country has a dry climate because it does not have a lot of rain. That's why the waters aren't much. Thus, no large rivers are formed, which are at the same time navigable. The largest river is the Evros at the Greek-Turkish border. He comes from Bulgaria and pours his waters into the Thracian Sea. It is 204 km long in Greek territory and is floated by small boats. Common rivers with Bulgaria we have Strimonas and Nestos and with Yugoslavia Axios. They all pour into the Aegean Sea.

The climate in Greece is mainly Mediterranean. However, due to the unique geography of the country, Greece has a remarkable range of microclimates and local variations. To the west of the Pindos Mountains, the climate is generally more humid and has some marine characteristics. The eastern part of the Pindos Mountains is generally drier and warmer in summer. The highest peak is Mount Olympus, 2.918 meters. The northern regions of Greece have a transitional climate between the continental and the Mediterranean climate. There are also mountainous areas with an alpine climate.

Greece is a developed country, with a high standard of living and a "very high" Human Development Index, which ranks 22nd in the world in 2010, and 22nd in The Economist's 2005 of Quality of Life Index worldwide. According to Eurostat data, Greece's GDP per capita was 94% of the EU average in 2008. The main major sectors of the Greek economy are tourism, shipping, food production and tobacco processing. textiles, chemicals, metal products, mining and petroleum refining plants.

Greece is a developed country with an economy based on services (80%), industry (16%) and agriculture in 2017. The country's major "industry" is tourism and shipping. With 18 million international tourists in 2013, Greece was the EU's 7th most visited country and 16th in the world. The Greek Merchant Navy is the largest in the world, with Greek-owned vessels accounting for 15% of the world in 2013. The increased demand for international maritime transportation between Greece and Asia has resulted in unprecedented investment in the shipping industry. 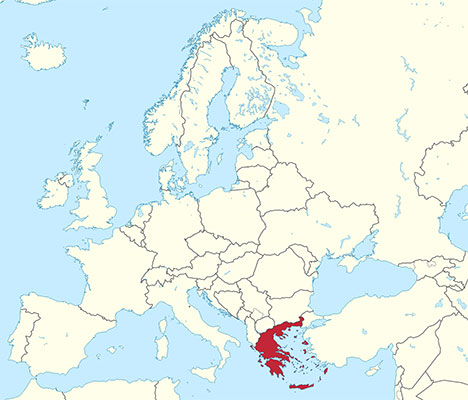