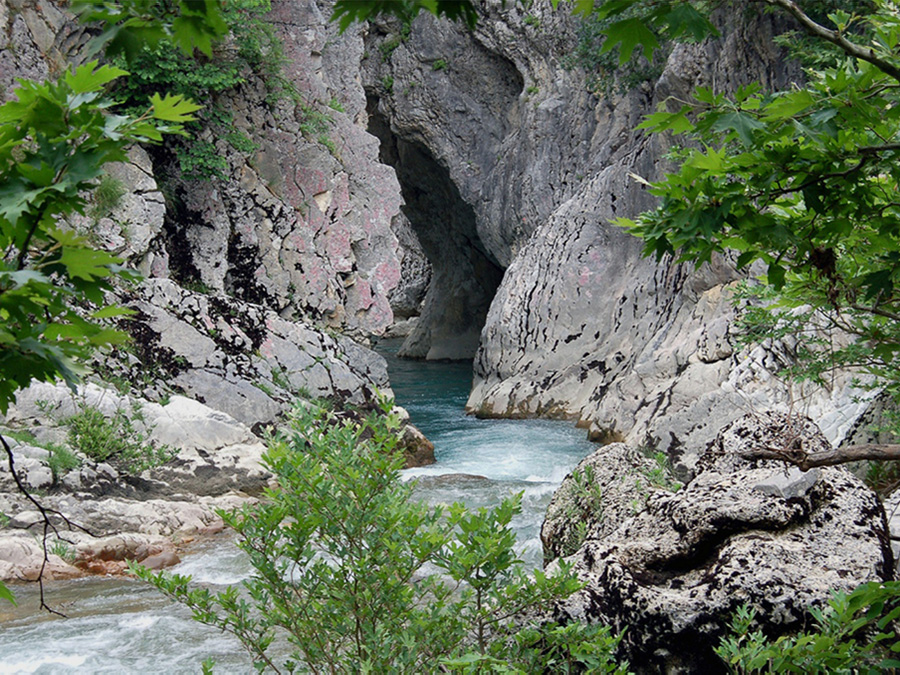 Acheron is a river of Epirus, springs from the mountains of Souli and flows into the Ionian Sea in the area of ​​Ammoudia, one and a half hours south of Parga. Its route forms a gorgeous canyon, which especially during the summer becomes the attraction of many tourists. In mythology, Acheron’s plain was the place where the souls of the dead lived. This is apparent from the names of the rivers in the area. The name of the river Acheron comes from the ancient Greek word achos and means the river of sighs. The tributary Periflegedon means the river of fire, and the tributary Kokytos means the river of lamentations, from the ancient Greek word kokytos which means scream or lamentation.

Near Acheron’s crossing point with its tributaries, was the Necromantion (ancient Greek temple of necromancy) where the relatives were communicating with their dead. At the meeting point of Acheron with Acherousia Lake, were the gates of the underworld. The ferryman Charon (the son of Erebus and Night) carried the dead with his boat on the opposite bank, to the kingdom of Hades and was taking a coin (obolos) for the ferry. This is the reason that the ancient Greeks buried their dead with a coin on the their lips.

Acheron consists of several routes. Some of these are:

The route starts from the village of Glyki and is the most crowded route. For the beginning of the trail for Skala Tzavelenas, we turn left immediately after the metal bridge in Glyki. After 500 m there is a crossroad. The left road leads downhill to the river. The second leads to a parking where we leave our car and we continue on foot. This point is the beginning of the path. Many hikers are visiting the route every year because of the beautiful scenery that leaves you speechless as the trail moves in higher ground between impressive, full of plants mountains, while on the left and at a lower altitude, Acheron slowly flows through the centennial plane trees. The path often divided into smaller paths that lead either to the river or higher to the mountain. At about 100m we find a tunnel in the rock through which our route continues. There is also a perimeter path to the tunnel for those who want to enjoy the river view. After the tunnel, the path is getting narrower, more difficult and at some points, quite steep. After 10 minutes of walking, we find an wooden observatory on the left. The view is breathtaking as the Castle of Kiafa stands in front of us, the historic Kugi is on our left and on the opposite side of the gorge stands Glyki. From this point the path goes downhill, leading to Acheron‘s Bridge. About 200m we find an informational road sign with the map of the area. Here the hiker has two choices. Either to continue the path downhill to Acheron’s Bridge or to follow the path that goes to Trikastro and the Gates of Hades (about 6 hours).
We take the downhill path, we pass the bridge of Acheron and continue for the bridge of Ntala. This is our return point. The way back is going through the river so we enter the river and we move with the river flow. Depending on the height of the water at some points, we will need to swim. August is the month when the river has the least amount of water. After hiking a long time in the water, we leave the river, to continue hiking on the left bank. Straight ahead in a distance we can see the river springs and in a while the path becomes an earth road that leads us to the springs of Acheron and the village of Glyki. The route can be done also in the opposite direction (first the river route and afterwards the mountain route) or separately in two pieces. We made the piece from the springs up to the bridge and a little further into the gorge and we were thrilled and excited.

The gates of Hades, for touristic purposes, have been “transported” to the eastern part of the riverbed near the  village of Sykies, 3 minutes away from the village of Seriziana. Here there is the beginning of the narrowest part of the Acheron gorge. Before the village we pass over a bridge. After 100m there is a crossroad with an informational road sign that shows the way we should follow. A few minutes later we stop at the end of the road in an enlargement, which we can use to park our cars. On our left hand, we find the path that will lead us to the riverbed. This section of the river is more fierce, darker and deeper. It therefore needs more swimming. The rocks are standing steep and tall, hiding the light and narrowing the flow of the river. The waters are dark, with no clarity, flowing with roar. This exquisite setting is the perfect scenery to be named, Gates of Hades. We continue through the river, which is becoming friendlier and we arrive in about 1, 5h on an opening, where there is an iron bridge. At this point we have two options. The first is to continue straight and cross the gorge (in about 6 hours) until Glyki and the springs. The second is to return to Sykies.
Turning back can be done either backwards through the river, which is difficult because of the fatigue and the direction against the river flow, or from a path that goes above the rocks. The path is at our left hand, before the bridge, starting from a point that is not too obvious. Perhaps the most distinctive feature of the starting point is a pile of rocks, indicating that a large landslide seems to have taken place. We climb freely the stones and on our left hand we can find the begging of the return route. Initially, the trail moves in higher ground, away from the river. In many places it is quite dangerous and especially at the points with weak ground it needs a lot of attention. In a little while we get over the river. Here, we turn left to get out on the river bank. We follow the bank to a point where there are many stones, and we are passing across. We are going on the right into the woods and continue on the path that has become quite hard to find. So, following the left side of the river, we soon reach the point where the river meets the original path that we have descended from the village. From there we return to our starting point.

Either from the village of Glyki and the springs or from Sykies and the Gates of Hades, the route is beautiful. It is better to start our hike from Sykies, which means from the east side heading west, so that we can move along with the river flow. The most beautiful points of the route are at the beginning and at the end. For those hikers who do not like swimming there is the mountain path that goes up the hill and far from the river and leads from the springs of Acheron to Trikastro (opposite to Seriziana). This route lasts about 6 hours and meets with the river twice.