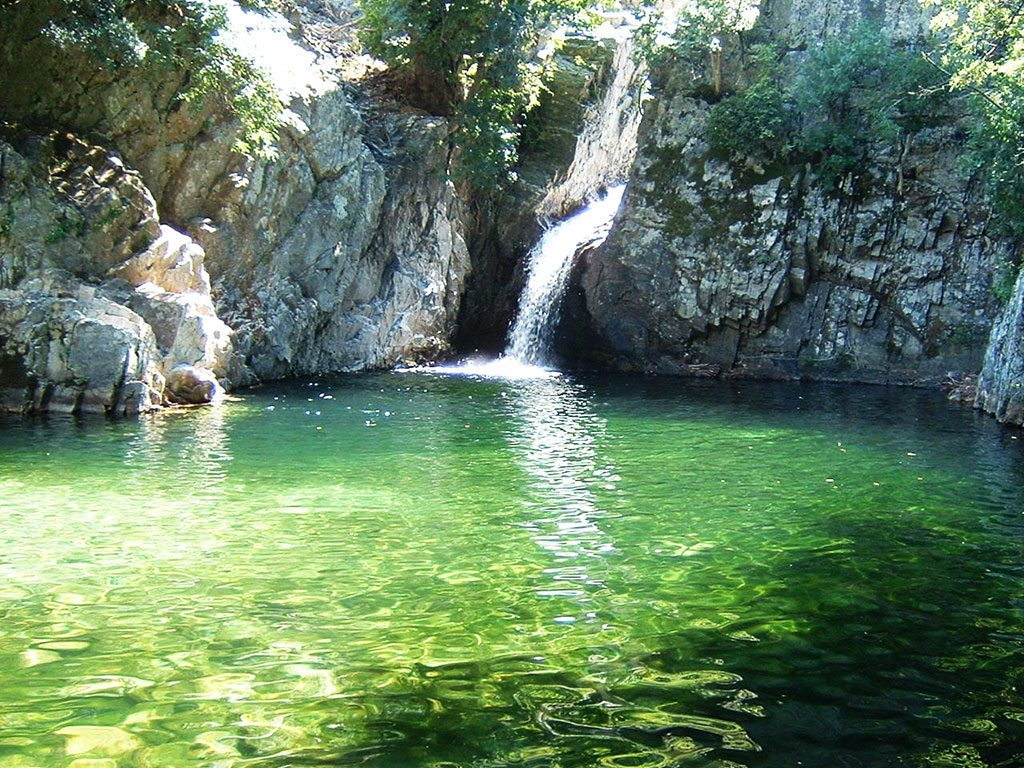 Fonias Gorge is the most popular of the gorges of Samothrace but also one of the most beautiful in Greece. It owes its name to the tower near the sea where it is said a crime had been committed in the old days. The entrance is in "Karya", at 700 m altitude and you can go there from Koufouklio or from the path that starts from Varades, which is uphill and difficult.  At the mouth of the river on the north coast dominates the homonymous medieval tower, also known as the Cape of Fonias (Cape of the killer).
Initially the gorge has nice water slides and large granite vathres (the vathres are natural pools created by waterfalls), it is open with lush vegetation and the hiking route to the first vathra, Gria Vathra, is easy and lasts only half an hour, following the creek. From there, the most beautiful and much more dangerous routes begin. Fonias has difficult passages and slippery ground and you will need durable shoes, ropes and an experienced guide who will show you the right paths so you do not get lost.
For the second vathra you go up a steep, dirt path with stones. At the fork you encounter, go left to descend to the largest pedestal of the gorge. For the third and last one you need a better shoe and more attention. It takes about 40 minutes to walk and there are rock passages. The third pedestal has more clean and colder waters, while at the back there is the largest waterfall of the gorge, the waterfall of Klidosi.
After about 3 hours, through a specific path, you reach Klidosi, the impressive, high waterfall of Fonia, but also a technical point, where the gorge narrows and turns. After the Klidosi, the waterfalls and rappels begin and the descent lasts another 3 hours, a total of about 6 hours. Small and large jumps are present throughout the descent. The amount of water is also satisfactory even in summer. Saos was particularly favorable to Fonia since the peaks "Koufouklio", "Amoni", "Louloudi", "Feggari" and "Akoniama" that enclose the gorge form a large river basin. The main springs start near the top, while many smaller streams and springs continue along the gorge.
The gorge of Fonias has the most beautiful vathres of the island, but it is also the most touristic, because of the ease of access to its lower points. So it gets very crowded especially in high season, July and August. Best time to visit the Fonias gorge waterfalls is probably springtime or after a rainy period.