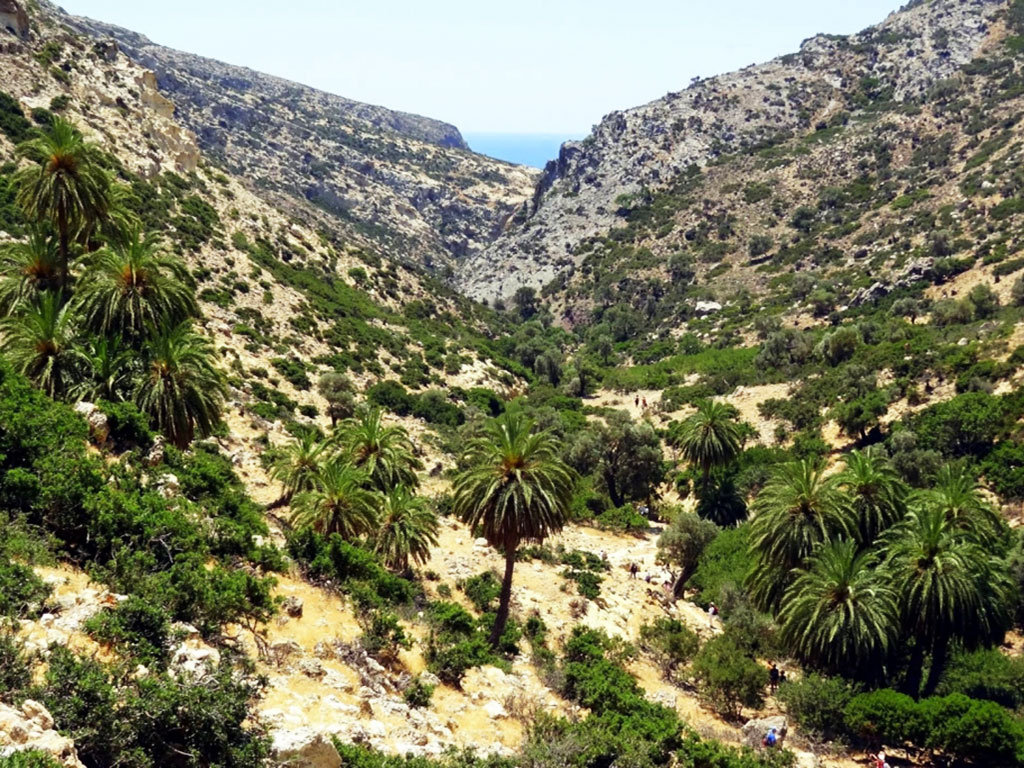 The gorge of Martsalos is one of the most beautiful in Crete and is property of the Holy Monastery of Odigitria. It lies behind the western Asterousia Mountains, between the Cape of Lithino and Agiofarago. The gorge exits at the picturesque bay of Martsalo in the South Cretan Sea (Martsalos in Latin means Good Port).

Going through the gorge is relatively easy apart from the steep downward part, from the cavernous temple of Panagia Martsaliotissa to the bed of the gorge. Along with Agiofarago have experienced a great solitary - ascetic life from the first Christian years until today.

The vegetation is very dense and consists of ancient olive trees, carob trees, oleanders, locust trees and holly oak trees while in the middle of the gorge there is a colony of endemic Theophrastus palm trees. The wild landscape combined with the vertical limestone rocks create an impressive landscape.

To reach the entrance of the gorge you have follow the dirt road that connects the Monastery of Odigitria with Lithino. At the beginning of the gorge there is the conical sculpted cave of Panagia Martsaliani, which is dedicated to the Annunciation of the Virgin. The temple is carved into a rock in the shape of a cone and is 8 meters deep and 10 meters high. The cave was used as a catacomb in times when Christians were persecuted but over time it was abandoned for unknown reasons. The church was covered by large rocks due to landslides and was found by shepherds in 1938. The icon of the Virgin Mary was found inside the cave. Around the church there are hermitages that hosted ascetics in the past. The cell of the monks Parthenios and Eumenios, who restored the Holy Monastery of Koudoumas, in 1878 can still be found in the gorge.

In the middle of the route, in an area called Perivoli, there is a stone tank in which the water of a small spring is collected. Above Pervoli is the house of Gaviotis who was an elderly pirate. He was settled there during the pirate raids and the pirates built a house with an oven for him, in order Gaviotis to make rusks for them. The oven is kept in good condition, as well as the coop they had made under the oven.

The gorge exits is in the bay of Martsalo. This is a deserted, windless cove with turquoise waters and some tamarisk trees that offer natural shade. In the picturesque  bay there was was a port during the Minoan era.  It flourished between 1800-1600 BC. and archaeological excavations have revealed ruins of the port and the settlement.

If you descide to go through the gorge you must not forget to have some water with you and some snacks. Since you are there don't miss to visit the monastery of Odigitria.