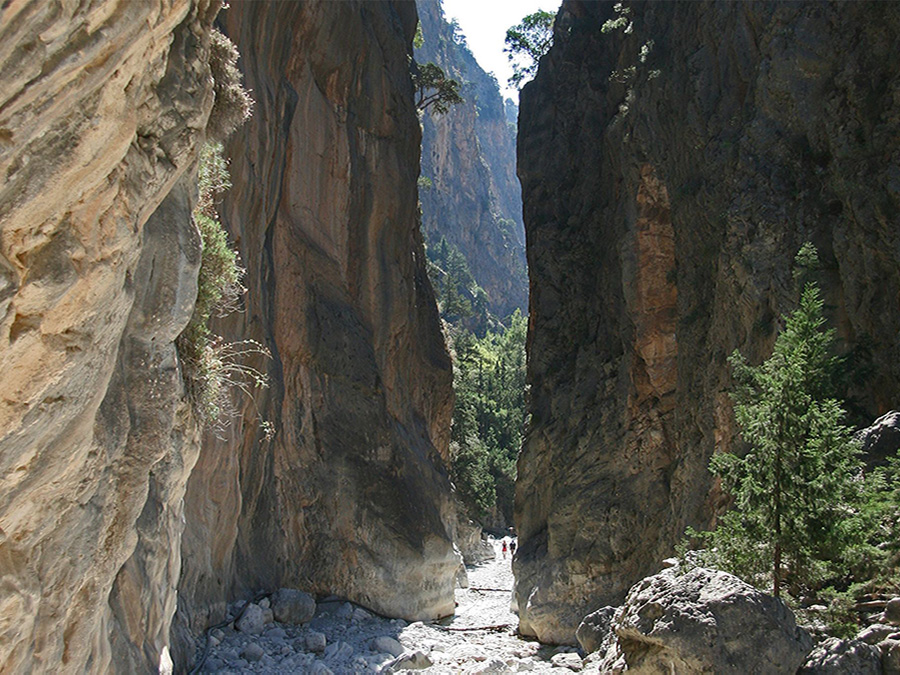 The Samaria Gorge is the longest trekking gorge in Europe and also the most famous of all. Thousands of tourists flock here daily in the summer season to walk from the top to the bottom. For many visitors, it is the sole purpose of their visit to Crete. The length of the gorge, which belongs to the European E4 path, reaches 18km and takes almost 4-7 hours to hike from Omalos to Agia Roumeli, depending on trekking speed.

The gorge is locarted at the South of Chania Prefecture in the larger uninhabited area of Europe, where no roads even exist. It was created by a small river running between the White Mountains (Lefka Ori) and Mountain Volakias. There are many smaller gorges vertical to Samaria Gorge, most of which have never been crossed by humans and require canyoning equipment.

While the gorge is officially 18km long, this distance actually refers to the hiking distance between the settlement of Omalos on the northern side of the plateau and the village of Agia Roumeli. In fact, the gorge is 16 km long, starting at an altitude of 1.250m at the northern entrance, and ending at the shores of the Libyan Sea in Agia Roumeli. The walk through Samaria National Park is 13 km long, but you have to walk three more kilometers to Agia Roumeli from the park exit, making the hike totally 16km.

The most famous part of the gorge is the stretch known as the Iron Gates, where the sides of the gorge close in to a width of only four meters and soar up to a height of 500 m. The gorge became a national park in 1962, particularly as a refuge for the rare kri-kri (Cretan wildgoat), which is largely restricted to the park and the island Thodorou just off the shore of Agia Marina. There are several other endemic species in the gorge and surrounding area, as well as many other species of flowers and birds.

The village of Samaria lies just inside the gorge, in the middle of nowhere. It was finally abandoned by the last remaining inhabitants in 1962 to make way for the park. The village and the gorge take their names from the village's ancient church, Osia Maria ("Saint Mary").

Descent in the canyon starts from the position Xyloskalo at Omalos Plateau, at an altitude of 1200m. The trail is forested, wide and very well discernible, while at the beginning descends abruptly. We meet drinking water and toilets very often. In about three hours we reach the old village of Samaria, at an altitude of about 300 meters, after crossing by the church of St. George.

In Samaria there are old houses, trees offering shade, water springs and if you are lucky you will meet the endangered Cretan wildgoat. From here onwards the landscape changes, becomes drier and the slope gets smooth. One hour later we meet a small river that follows us for some time. There are several small wooden bridges in several places, above the river.

After one more hour we meet the imposing Portes (Gates) which is a very narrow passage between two tall vertical 500m high cliffs. We soon reach the old village of Agia Roumeli that was abandoned in the mid 1900s due to a devastating flood and was moved to the seaside settlement of Agia Roumeli, which is about 30 minutes away.

From Agia Roumeli, tourists take the boat to Chora of Sfakia and then the bus to Chania.