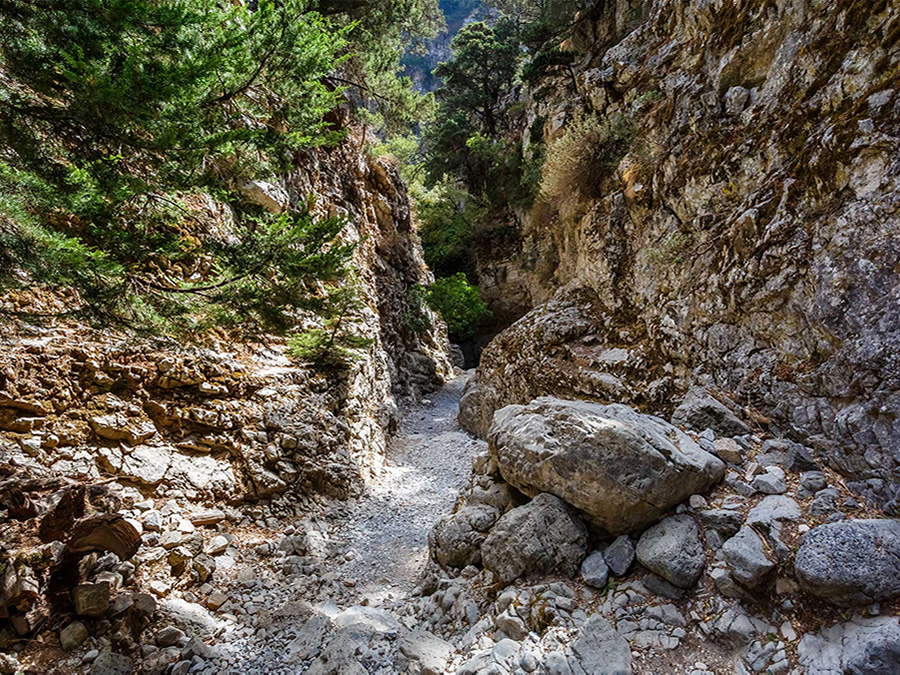 Imbros Gorge is certainly worth a visit since it is one of the most beautiful and famous Cretan Gorges. It is located in province of Sfakia in southern Crete and it runs parallel to Samariá Gorge. The Imbros Gorge mule trail was the only connection between Chania and Hora Sfakion, before the road was built. Remains of this trail can be still seen. Imbros is the third most visited gorge in Crete, following Samaria Gorge and Agia Irini, all belonging to the E4 European hiking path. The walking length of the gorge is 9 km and the course lasts about 2.5-3 hours.

The gorge of Imbros was the main route through which Allied Forces evacuated Crete in late May 1941 after losing the Battle of Crete. Close to 20.000 troops (mainly New Zealanders, Australians and Brits) headed from the north of the island through the gorge of Imbros to Komitades and Hora Sfakion where they were due to be picked up by ships and taken to Egypt. About 13.000 made it onto ships. The rest were made prisoners by the Germans or escaped to the hills. There is a monument in Hora Sfakion commemorating these events.

The picturesque scenery and its wilderness in combination with the low difficulty make the descent of Imbros ideal for families with children. The gorge starts from a small plateau just below the village of Imbros, 700m above sea level and ends at the village Komitades, offering wonderful views of the Libyan Sea. It is a gorge with a rocky formation, narrow at some points and has a large variety of wild vegetation and trees which literally grow through the stones and rocks.

During your descent, you will meet various famous locations such as the “Airplane” where a German plane crashed during the Second World War, the “Stenada”, “Mesofarango” and the “Xepitira Arch”. The “Stenada” is after approximately 1 hour of walk into the gorge and is the most impressive part of the Gorge as It is the narrowest point where the walls of the gorge are less than 2 meters apart and tower 300 m. above. Right after is the “Mesofrango”, a resting place, where there is a Venetian water cistern and the hut of the guard of the gorge. The “Xepitira” is a stone arch, the trademark of the gorge and it can be found  right after the impressive narrowing at Gremnaria. Continuing the journey and after passing a few narrow passages you reach the exit of the gorge where some taverns can be found.

The gorge is usually open all year round. The entrance to the Imbros Gorge requires paying a small fee. There are several bus services to Imbros starting from Chania during summer. For those who reach Imbros with their own car, they can leave it there, pass the gorge and return to it with a taxi from Kommitádes or walk through the gorge all the way back again, as it is not so tiring. Spring is a really lovely time to walk through Imbros because there are many flowers but bear in mind that April is also the busiest time of the year for Imbros as many tour operators who cannot offer a tour to the gorge of Samaria (which is generally still closed to the public in April) will come to Imbros.