The Aggitis (Maara) Cave is one of the most spectacular caves in Europe. It is located 23 kilometers northwest of the city of Drama, in northern Greece and is the longest river cave in the world and the only river cave in the entire country. Aggitis River has its sources at the foot of a mountain of the Rodopean mountain range near the small village Aggitis, northwest of Dráma. The river runs through the cave in a naturally-formed tunnel and after it exits pours its waters into the Strymon River which in turn flows into the Mediterranean Sea, not far from Amfipolis. The first recorded exploration was made by Esprit-Marie Cousinéry , the French consul at Thessaloniki, who travelled around Macedonia for almost 40 years. After his retirement, he wrote a book about the area, in which he describes his visit to the cave. When he visited the cave, at the end of the 18th century, entered only the first hall and named it “Nymphaion”, as he thought this was a place of worship for water gods.

In the 19th century, a water wheel was installed in this huge hall, which pumped water up into a water pipe. The pipe supplied the nearby villages with water and irrigated the fields. This hall has a big opening to the surface, a doline where the roof has caved in. The hall is also accessible from the cave entrance, but the ceiling is very low. At that time the first short tunnel was constructed to provide easier access. The cave was first explored by speleologists Yannis and Anna Petrocheilou of the Hellenic Speleological Society (H.S.S.) in 1952, but a siphon after 70 meters stopped any further exploration. In 1978, a group of French and Greek speleologists with better equipment, made a new attempt to explore the cave behind the siphon. They discovered a 500m long passage which again ended at a siphon. This part of the cave is today’s main show area. Soon after a second short tunnel was built to allow people overpass the siphon. Anna Petrocheilou, who was president of the Hellenistic Speleological Society at this time, suggested the cave to be developed as a tourist attraction and open to the public. Unfortunately, this plan didn’t work out until 2000 when the cave finally opened to the public.

The roof of the cave is covered with spectacular stalactites, some of which reach down to the surface of the water. However, there is only a limited number of stalagmites because of the continuous flow of the river within the cave. More than 8 km (5 miles) of the cave have been explored so far, but only a part of it is accessible to visitors. The huge size of the halls and the stalactites, along with the river flowing through the cave creating banks and rocky formations, compose an eerie atmosphere that enhances all visitors. Today, a new entrance tunnel allows easy access to the main passage and enters the cave at the so-called Beach Chamber. The path, built on a bridge above the river, runs along the river and visitors have to walk back to exit the cave. Before the exit, a bridge crosses the river and a short tunnel leads to a narrow section of the cave and another tunnel to the entrance hall. The water wheel, the huge doline and a small chapel are the highlights at the end of the tour. 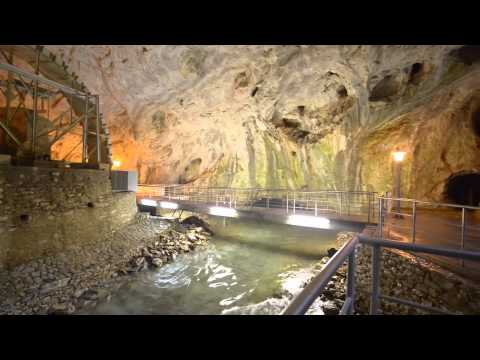