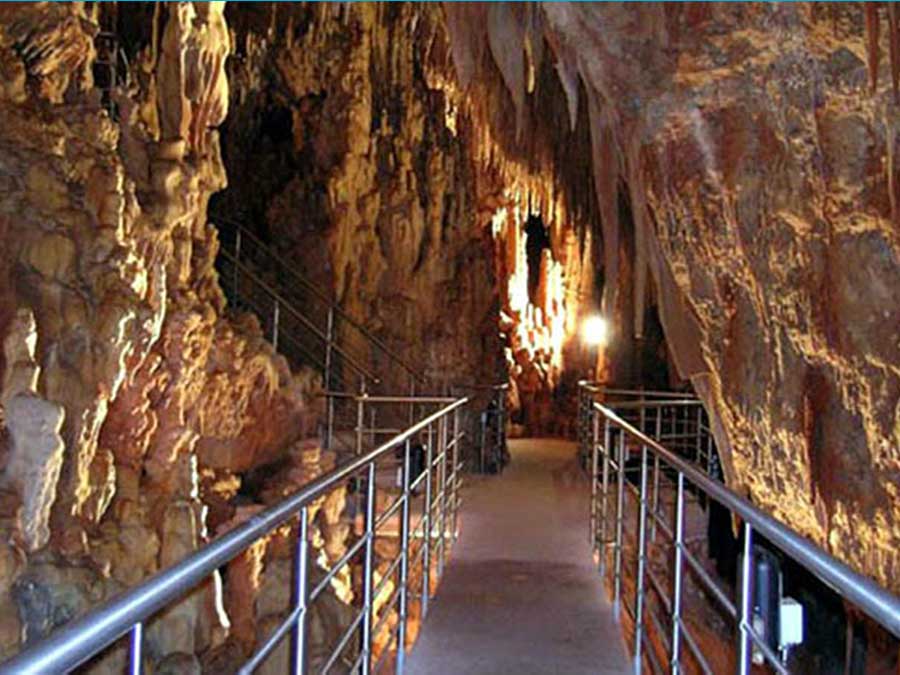 The Kastania Cave is located in Vatika, in the Municipality of Monemvasia, in Lakonia .At the beginning of the last century, Kostas Stabaktas, a shepherd, had noticed the bees who, starting with a small hole, spoke and fainted. He opened a slit on the ground looking for water. He found himself in front of a cave of unique beauty. Since then, he and his descendants used to enter the Cave, holding a lit aperture to see and take water from a small trough . This was done until 1958, when the Cave became widely known and was entrusted with the preservation and the effort to exploit it in the Kastania Community of the former municipality of Voi. In 1958 the shepherd saw a postcard depicting a cave and understood the significance and importance of the cave.

Three million years took nature to create the unparalleled gemstone decoration and to make bodies and shapes of a fancy fantasy. Among the giant red and white "waterfalls", the giant multipurpose columns, "curtains" and "bed sheets" that populate like candles from the roof, nest "octopuses" and corals, "elephants and mushrooms, birds "and caricatures," exotic plants "and monumental creatures.

Rare instances such as discs, flat stalagmites, eccentrics and helicitis have their special place in the cave and are important stops for the tour. With a little luck, you might come across a gentle permanent resident of the cave, the blind and deaf sloth.

One of the most impressive caves of Greece can be found near the village of Kastania on the southern tip of the Peloponnese, just minutes away from Neapoli. The route follows the winding mountain road leading to the forest-covered eastern slopes of Mt. Parnon.

Standing out among the numerous attractions of the cave are geological rarities such as discs, flat stalagmites, eccentrites and elictites. With a little luck, visitors may meet the cave’s noble resident insect, the deaf and blind dolichopoda.The cave’s surface covers 1,500 square meters separated into two levels and the visitor is guided along a 500-meter route. The cave was formed from limestones of Jurassic age (195-145 million years old) as a result of geological turmoil and chemical reaction. The stone décor owes its seven-color palette to crystalline carbonate lime enriched with several metal oxides.