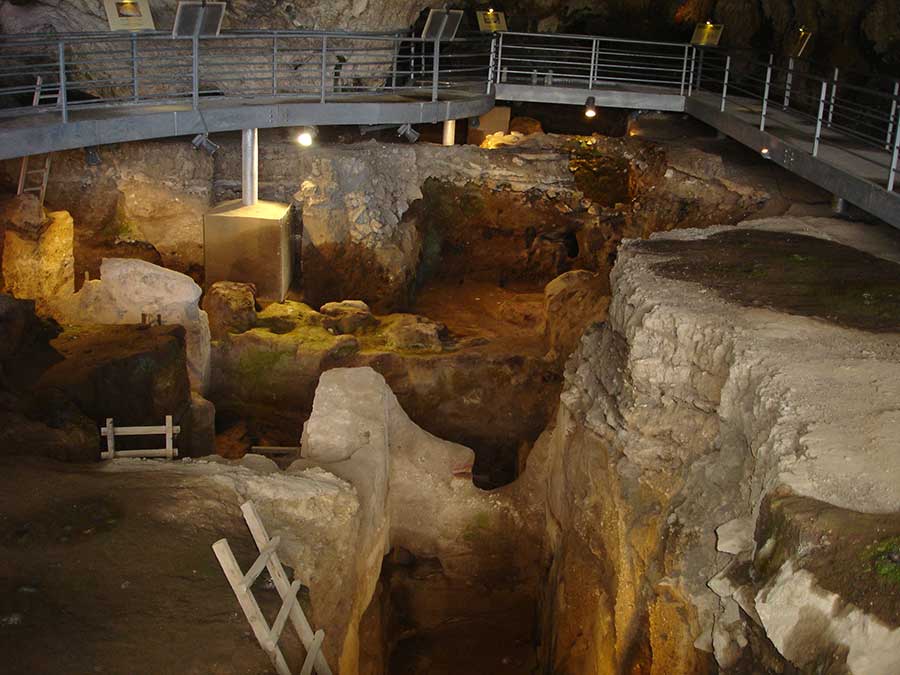 The cave of Theopetra is located on the northeast side of a limestone rock formation, 3 km south of Kalambaka, in Thessaly, central Greece. The site has become increasingly important as human presence is attributed to all periods of the Middle and Upper Paleolithic, the Mesolithic, Neolithic and beyond. The formation of Theopetra limestone has been dated in the Upper Cretacious period (137.000.000 - 65.000.000 years ago), however, the cave is not that old. The area of the cave is approximately 500 square meters (5,380 square feet) and has been continuously inhabited from circa 50000 BC to 3000 BC. The chronology of its prehistoric inhabitation has been established through more than 50 radiocarbon dates, derived mostly from charcoal samples collected from the remains of hearths.

The entrance is arched, 17m wide by 3m high and allows abundant natural light to enter the interior. The abandonment of the cave by its occupants around 3000 BC is most likely related to natural phenomena.The intense activity of the water that entered the cave through karst ducts towards the end of the Neolithic period and the collapse of large pieces of the roof, again due to erosion, probably forced the occupants out of the cave in search of another place to make their home.

Dr. Aikaterini Kyparissi-Apostolika, specializing in prehistoric archaeology and speleology, was the head of the team which began excavations in Theopetra Cave in 1987 and continued through 2007. Before 1987, the cave was occasionally occupied by shepherds, who sheltered their herds in it. The study of the cave has already provided us with plethora of information, including climate changes in the long past and evolution of human life in the area during the Paleolithic era. During the excavations, archaeologists were able to find many burials, stone tools, pottery, animal bones, as well as the oldest known man-made structure on earth, officially recorded to this day. This was a stone wall which once partially closed off the entrance of the cave. Using a relatively new method of dating, scientists have now been able to date this wall to around 23,000 years old. It is assumed that this wall was built by the residents of the cave in order to protect themselves from cold and winds.

Among the most striking finds, two human skeletons, one from the Upper Paleolithic period after the Last Glacial Maximum and one from the Mesolithic period, should be emphasized, while in a deep Middle Paleolithic layer, the oldest human footprints, with remains of fire, were uncovered. In 2009, the archaeologist’s team found a trail of at least three human footprints left in the cave’s soft earthen floor, apparently by several Neanderthal children about 2-4 years old, judging by the prints’ sizes. It is estimated that they lived in the cave during the Middle Paleolithic period about 135,000 years ago. The archaeologists also discovered human burials at the place of their deposition so there is no doubt that this cave was inhabited. In 2016, researchers successfully extracted the DNA from the tibia of individuals, buried in Theopetra Cave. Two burials correspond to the post-glacial Upper Paleolithic period and one has been dated to 14990-14060 BC, while three more burials correspond to the Mesolithic, and have been dated between 7000 and 7500 BC. All skeletons found, according to the archaeologist, belong to the type of Homo Sapiens. Among them, are the remains of an 18-year-old woman who lived in the cave 7,000 years ago. After years of intensive work, the teenager’s face was reconstructed by scientists and she was given the name of “Avgi” (Dawn).

The excavations in the Cave of Theopetra came to disprove earlier data leading us to the beginnings of prehistoric humans’ habitation in Thessaly. All the findings are now exhibited at the Theopetra Cave Documentation and Training Center (Museum) at the entrance of the village, not far from the cave. In a specially designed room, visitors can learn about Greek prehistory and Theopetra cave, through interactive applications that are designed to combine knowledge and fun.