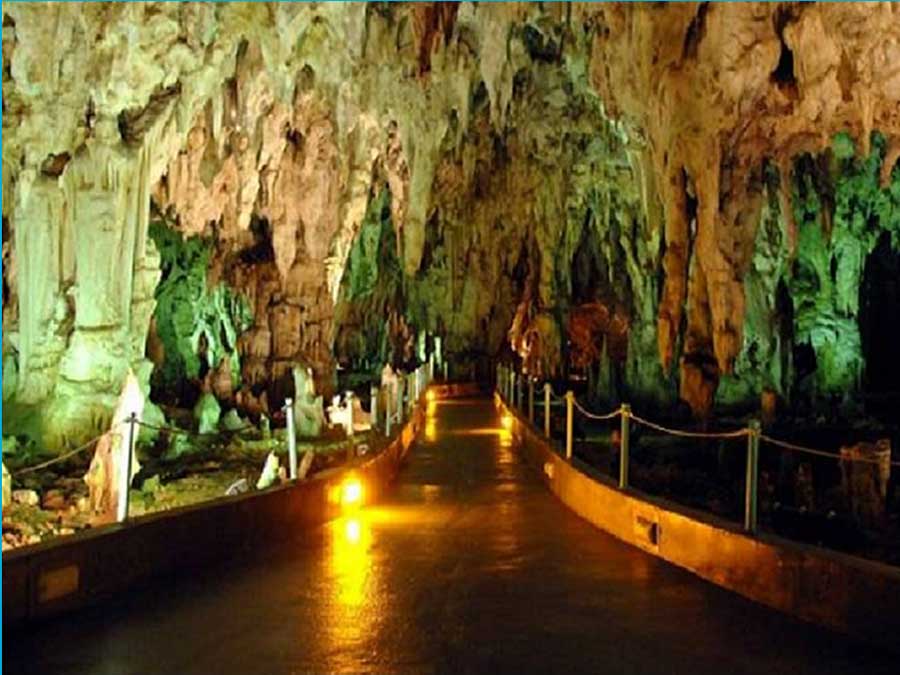 Alistratis Cave, one of Europe's largest caves, is located 6 km southeast of Alistrati’s town at a place called “Petroto”. The cave fascinates with its breathtaking variety of formations. According to mythology this is the cave through which Hades kidnapped Persephone, daughter of goddess Demetra, to the underworld. It is considered to be the most beautiful and most decorated cave in Greece and probably in Europe, where nature decided to demonstrate its power, in creating ornaments.

The expanse of the area is almost 14.000m². The antechamber of the cave is 8 m height. It’s from this point that start different high galleries folly decorated with stalactites and stalagmites. They are very impressive mostly because of the difference of their shapes and their age. The older stalactites are mainly in the galleries which are on the right side of the entrance. The rich decoration includes, apart from stalactites and stalagmites and rare ekkentrites. The ekkentrites or eliktites are rare formations created "defiance" of the laws of gravity and following irregular paths. The large variety of eccentrics make the cave unique in Greece. What fascinates the most is the pure white forming draperies. There are other chambers and their height is quite the same 8-10m.

From the reception chamber and towards the left, emerges a second passage, quite parallel to the first. In this gallery there are even some red stalagmites which are called “The flames”. The height of these formations reaches 35 m. Somewhere in these passages, the two main passages join each other and continue with an always increasing width and height while from the ceiling one can see suspended huge and majestic stalactites of a height of 15 m.

It is of an horizontal type and its passages resemble to a labyrinth. The temperature is quite stable all year long. Because of the thin limestone layers above (10-30m) the temperature of the cave is quite high (15-17°C). Its great size, a total 3km meters in length, and at points 35 meters high make it a unique wonder of nature. The cave belongs to the cave network of the Aggitis gorge along with four other famous caves. It is placed 50 km away from Serres, 25 km from Drama and 55 km from Kavala. The cave was first open to public in 1998.