5km away from the town of Kandila, in a height of 700 meters surrounded by the ArkadianMountains and at the end of a beautiful valley of cultivable areas, there are the Springs of Sintzi. Since 1990, these springs have become a sight that draw the attention of cave divers and speleologists from Greece and abroad.
There have been many important missions with the assistance of the Hellenic Speleological and Exploration Club and its divers with the milestone to be the one of 2009 when the divers reached the incredible depth of 153 meters making this cave the most deep in Greece and one of the deepest in Europe.
However, the most important mission until today is the one of 2015 called “Sintzi Cave Expedition” when the diver FontasPitsinelis reached the 186 meters breaking the record of GiorgosTzavelas (153 meters) stating that the cave is even deeper. The water in the cave is fresh and the temperature is between 10-12 Celsius degrees.
Generally the visibility is very good but it differentiates depending on the season and most probably on the rainfalls that change and affect the power with which the water flows out. An important detail of the morphology of the cave is its rambling area. The rocky surfaces have been carved thousands of years by the strength of the waters that gradually create the curved surface. Its grounds have solid and strong geological materials that contribute in the good visibility. 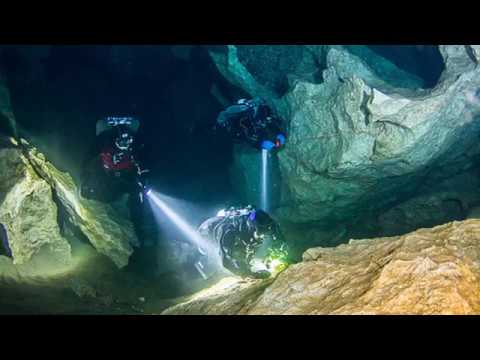