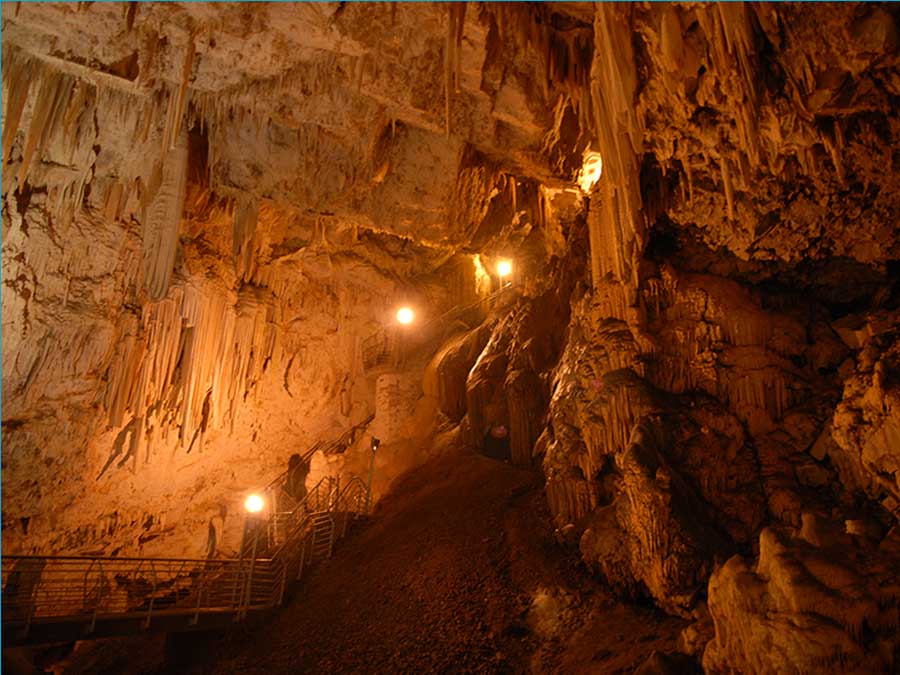 The Cave of Antiparos or Oliarou is among the most beautiful and significant in the world; this because, in addition to being an enchanting natural site worth seeing, it is inextricably linked to the history of the area and generates great archaeological interest.The Cave was well known in antiquity. Fragments of ancient vases and findings from the Stone Age have been discovered in its interior. Etchings and inscriptions on the stalactites and stalagmites confirm its oldness. Archilochus (c. 680 – c.645 BC), the Greek lyric poet from Paros, was reportedly the first known visitor. The following inscription, engraved upon the majestic stalagmite at the entrance, survived up to the 20th century: ‘Epi Kritonos ide ilthon Menandros, Soharmos, Menekratis, Antipatros, Ippomedon, Aristeas, Fileas, Gorgos, Diogenis, Filokratis, Onisimos.’ [Menander, Socharmos, Menecrates, Antipater, Hippomedon, Aristeus, Phileus, Gorgus, Diogenes, Philocrates, Onesimus came here during the reign of Kriton]. According to information, these individuals were conspirators plotting against the life of Alexander the Great, who later were revealed, and, in order to save their lives they fled and sought refuge on Antiparos. This conjecture, has yet to be proven. It is most likely that they were ordinary visitors; however, the fact that the above narrative has survived through time means that it is up to the visitor to decide which version of the story he or she will keep.

In December 1673, the Marquis de Nointel—who, during the reign of Louis XIV served as French ambassador to the Ottoman court in Istanbul and was an admirer of the Ancient Greek civilization—was on Paros, the guest of the famous pirate Daniel. This trip of Marquis was on one of his continuous trips to the Greek islands aimed at collecting archaeological finds on behalf of France. On Paros, while overseeing the loading of antiquities for France, the Marquis was informed that some colossal statue was located on the neighbouring island of Antiparos. He left immediately for the island, with an accompaniment of 500 people that included painters, designers, builders, Jesuits, Capuchins, Turks and pirates. He reached the entrance to the Cave on Christmas Eve, only to discover—to his disappointment—that the supposed statue was a huge stalagmite. He ordered them to let him down by rope to the depths of the Cave and there, under the light of large candles and lanterns, dazzled, he saw the wondrous decorative sculptures created by nature sprawling all around him.

He immediately took the decision to hold Christmas Mass upon a huge stalagmite with a perimeter of 18 metres and a height of eight metres, which from then on has been known as ‘Ayia Trapeza’ [(Holy) Altar]. In this area illuminated by 100 large candles and 400 oil lamps, the vicar ambassador Ioannis Vaptistis [Jean-Baptiste from Peronne] conducted Mass; this spontaneous Mass— which had never been held on Greek land prior to this—was a thrilling experience. The following inscription was etched upon the stalagmite that had served as the Altar: HIC IPSE CHRISTUS ADFUIT EJUS NATALI DIE MEDIA NOCTE CELEBRATO MDCLXXIII [‘Christ himself was here and celebrated the day of His birth at midnight in 1673’]. Τhe Marquis de Nointel and his entourage remained in the Cave for three days and nights and slept near the ‘Ayia Trapeza’. However, as painters ‘immortalized’ the Cave in their artworks, other members of the entourage detached huge pieces of stalactites and stalagmites that were subsequently loaded onto ships bound for France. This marked the first major despoilment of the Cave; later, during the period of Russian supremacy over the island (1770-1774), the Cave suffered its second great despoilment. The stalactites and stalagmites that were detached adorn showcases in the Hermitage Museum in St Petersburg today. The Russians, in turn, were succeeded by the Germans, who destroyed a large section of the natural decoration during the Occupation of Greece in World War Two.

Following the visit by the Marquis de Nointel, the ‘Katafygi’ [shelter], came back to life. A host of foreign tourists arrived on the island to admire the grandeur of nature. These visitors dared to make the dangerous descent into its bowels, using rope ladders, ropes and fire-lit torches. Many of them, upon returning to their countries, put their impressions into print through the publication of books, accompanied by wonderful copperplates (engravings) of the Cave.