Zakynthos’ Marine Park is located along the southern coast from the promontory of Marathia’s Cape to the beach of Gerakas, including the outback of the beaches of Limni Kerì, Laganas and Kalamaki and the Strofades, two small islands 50 nautical miles southern of Zakynthos.
This area presents the main characteristics of the Mediterranean ecosystem, with sandy beaches, emerging rocks and sandy dunes, whereas in the outback there are thick pinewoods, fertile areas for the agriculture and the Mediterranean landscape with spontaneous vegetation.
The National Marine Park has been founded in 1999 with the main purpose of defending the particular fauna of the southern part of the island and of its integration with the local society. The most important animal specimen to protect are the turtles Caretta-Caretta and the Mediterranean Seals Monachus-Monachus.
In addition to turtles and seals the park intends to protect also other animal specimen. The southern gulf of Zakynthos and the Strofades are usually visited by migrating birds, wild swans, swallows, kingfishers, and sea gulls.
There are many frogs, tortoises, iguanas and soft water snakes. In the outback there are many porcupines and wild rabbits, whereas in the park waters it is possible to meet dolphins with the “bottle muzzle” or Tursiops Truncatus. 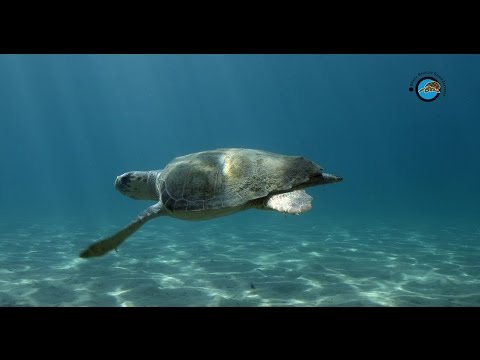