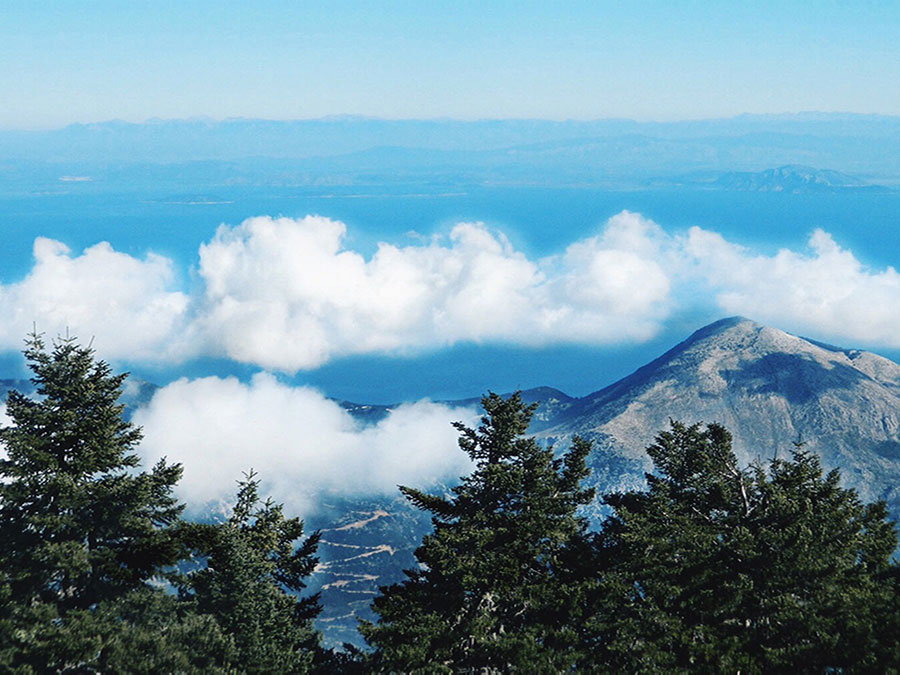 Mt. Ainos National Park was founded in 1962, mainly in order to protect what was left of the once flourishing and magnificent forest, consisting almost entirely of one of the finest forest tree species, i.e. the Cephalonian Fir (Abies cephalonica). It was righteously declared as a National Park, since the mountain is, according to International Code of Botanical Nomenclature, the locus classicus of the Cephalonian Fir, which is a Greek endemic species,. Moreover, the whole ecosystem of Mt. Ainos has a significant scientific and aesthetic value, being situated in the heart of Cephalonia island, right at the center of the island rich biodiversity.

The National Park of Cefalonia consists of an area of 2.862 ha, which expand at the mountain Ainos and at the adjacent mountain Roudi. Mt. Ainos with an alt. of 1.628 m is the tallest mountain in the Ionian Islands, whereas Mt. Roudi reaches an alt. of 1.125 m.

Its main feature is its Cephalonian fir forest (Abies cephalonica), which is unique in the Ionian Islands. Abies cephalonica is a Greek endemic species, i.e. it occurs only in the Greek region. In particular, it occurs in Cephalonia, Evvia island and in mainland Greece from Peloponnesus to Mt. Olimbos and Mt. Athos, at an altitude of 600-1.600 m. The need to protect the Fir forest on Mt. Ainos, where it was described as a new species (locus classicus), as well as the phytogeographical importance of its presence in Cephalonia, constituted the main reasons that resulted in the declaration of Mt. Ainos as a National Park in 1962. In previous centuries, Cephalonian fir was an important tree species particularly after the 16th century. This fact lead to extensive woodcutting in the forest of Mt. Ainos-Mt. Roudi, as well as the inability to effectively control and put out fires that occurred in the area, threatened the survival of the Fir forest. As a result, its distribution area has been restricted to 1/4 of the initial one.

In recognition of its significance at the European level, the National Park has been designated as a European Biogenetic Reserve, belongs to the "Natura 2000" European Ecological Network of Protected Areas and is a Special Protected Area for the protection of the avifauna. It has also been declared as a Wildlife Reserve.

Due to the lack of the necessary humidity requirements, amphibians are not to notice in the National, perhaps with the exception of Bufo bufo (Common Toad). The reptiles to be found in the National Park during a visit are: Algyroides nigropunctatus subsp. kephallithacius, endemic of Cephalonia and Ithaca, Algyroides moreoticus (Greek Algyroides), an Ionian and Peloponnesus endemic, Podarcis taurica subsp. ionica (Balkan Wall Lizard), a Balkan endemic, Vipera ammodytes (Viper) etc.

The mammalian species that inhabit the National Park, are typical forest ecosystem species: Erinaceus roumanicus (Hedgehog), Apodemus sp. (feral Mice), Myoxus glis (Edible Dormouse), Rhinolophus sp. (Bats), Martes foina (Stone Marten) etc. It is also likely to come across individuals of Lepus europaeus (Hares). One of the most peculiar mammals of Mt. Ainos is the insectivore Talpa stankovici (Mole), which lives underground in an extensive network of burrows. It reveals its presence by surface soil mounds.

The National Park lacks large-bodied mammals. An important exception to this is the small herd of relatively short horses, Equus caballus that lives freely in semi-wild condition in the wider area of the Monastery of Zoodohos Pigi in the SE slopes of Mt. Ainos.