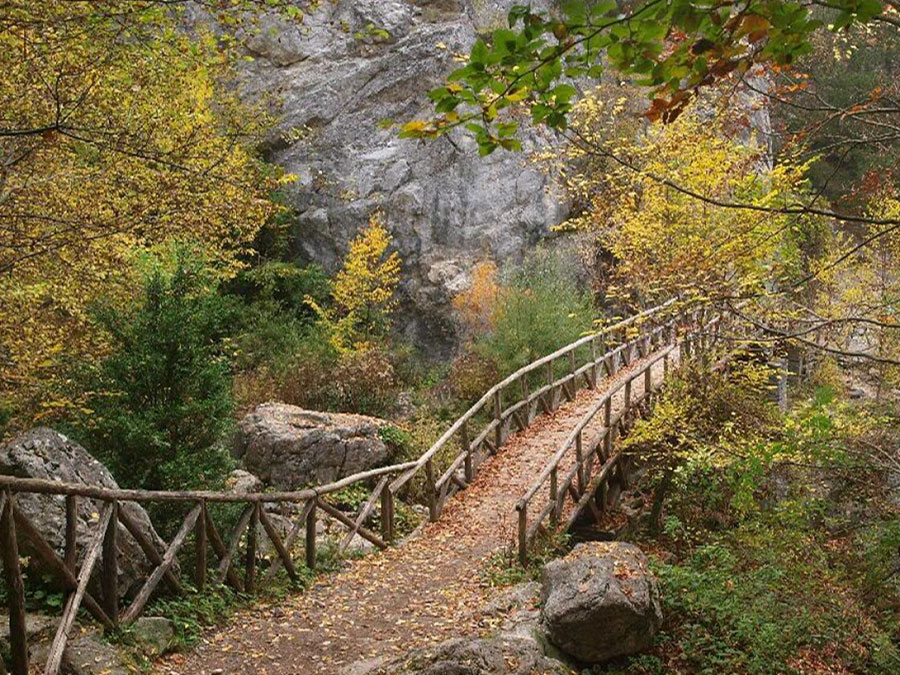 Olympus, the highest mountain in Greece (the highest peak is 2.918 m. above sea level), rises on the border of Macedonia and Thessaly, between the provinces of Pieria and Larissa. Owing to its specific microclimate, which is partly due to the short distance from the sea and the steep increase in height above sea level, it stands out for its great diversity in terrain, climate and vegetation.

The shape of the massif and the majestic peaks, covered in fog and low-hanging clouds, which often bring storms, in conjunction with its diverse and changeable natural beauty, have always induced awe and admiration. In this eerie landscape, the ancient Greeks placed the residence of the Twelve Gods of Olympus (with Zeus at their head), the Muses and the Graces. There, according to Hesiod, Zeus fought Cronus and the Titans and, after winning, settled there and became lord all the gods, demigods and humans. The myths and traditions collected by Homer and Hesiod were passed on throughout the ancient Greek and Roman world, making Olympus the epicentre of ancient Greek mythology and a symbol of Greek civilization.

According to ancient Greek tradition, the twelve gods lived in the gorges – or ‘folds of Olympus’ as Homer calls them – where their palaces were situated. On the highest peak was the throne of Zeus.

On the rounded and hospitable summit of Agios Antonios, south of Mytikas, an open-air sanctuary has been uncovered - the oldest finds dating to the Hellenistic period - which has been identified as the Temple of Olympian Zeus mentioned by ancient writers. This is probably the sanctuary Plutarch was referring to when, in the 2nd century A.D., he wrote that regularly occurring processions led small animals to a peak on the Macedonian side of Olympus and there sacrificed them to Zeus. The god’s share of the sacrificial meat was burned in the altar fire and the ashes were gathered in a pile upon which letters were inscribed. When the procession ascended the following year, they would find everything intact and the letters in the ashes just as they had left them, since neither wind blew to erase them nor rain fell to dissolve the pile. Antiquities have also been found on other peaks, but these have not been excavated.

Since Olympus was the home of the Gods, human settlements were restricted to the foothills of the mountain. The cities of Herakleion/Platamon, Pythion, Petra, Pimpleia and Leivithra (where, according to tradition, the grave of the mythical Orpheus was located), are some of the ancient cities neighboring the realm of the Gods.

The history of Olympus has been a tumultuous one. Even since ancient times, the surrounding area, apart from being a site of sacred pilgrimage, formed a battlefield for the control of access from Thessaly to Macedonia.

On Mount Olympus one can find the chapel of the Prophet Elias, on the peak of Prophitis Elias at 2.803 m. This is the highest elevation upon which a chapel has been constructed in the whole Orthodox world. It was built in the 16th century by Hosios Dionysios of Olympus, reportedly constructed upon ancient ruins. The same saint founded the most important monastery in the region, the Old Monastery of Hosios Dionysios, located at an altitude of 820m within the gorge of the River Enipeas.

Owing to its outstanding natural beauty, Olympus was the first area in Greece for which a special protection scheme was implemented, with its proclamation as a National Forest in 1938.

The forest itself features an anarchic succession of vegetation. As the altitude increases, the vegetation of Olympus, and particularly its distribution, presents many peculiarities. Thus, while in the neighbouring mountains of Pieria, Titaros, and Ossa there is a clear sequence of vegetation zones, on Olympus one witnesses an anarchy in zone succession due to its great variety of microclimates, which are due to the bedrock, slope, altitude above sea level, steep gradients and general terrain.

From 1400 to 2500 meters the zone of boreal conifers emerges, dominated primarily by Bosnian pine (Pinus heldreichii), a rare species of pine, which makes its appearance at an altitude of around 1,100 meters. Gradually replacing black pine, it forms unmixed stands up to nearly 2.000 meters. The areas where Bosnian pine grows are usually dry with rocky slopes. The vegetation that grows in the region is adapted to specific local conditions and is represented by characteristic shrubs, grasses, chasmophytes, etc., while the flora includes many endemic Balkan species.

Above 2.500 meters, the highest treeline in the Balkans, we no longer find forests but a variety of sub-alpine ecosystems of low-growing vegetation with many rare wildflowers, most of which are endemic to Olympus, Greece or the Balkans.