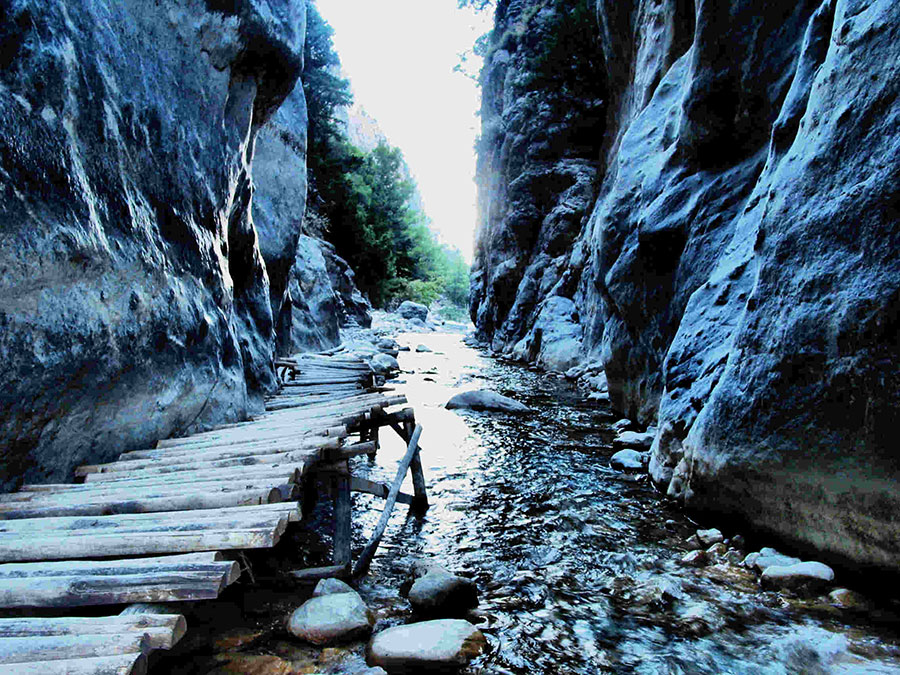 The Samaria gorge starts from the White Mountains (Lefka Ori) in the Prefecture of Chania, just below the Omalos plateau, in an altitude of 1200 meters.

The gorge stretches for about 16km and spills into the Libyan Sea. The gorge of Samaria is a unique formation in the Mediterranean and along with the nearby slopes and other smaller gorges makes the National Park of Lefka Ori or of Samaria which was proclaimed in 1962.

Samaria features a rich flora and fauna. The gorge has over 450 species of plants, 70 of which are endemic, such as diktamos (Origanum dictamnus), evenos (Ebenus cretica), ambelitsia (Zelkova abelicea) and the Cretan pine tree (Pinus brutia cretica).

It is also home to a large number of endangered species, such as the Cretan wild goat, also known as kri-kri (Capra aegagrus cretica), and the Cretan subspecies of badger (Meles arcalus), the Cretan beech martin (Martes foina bunites) ect. Furthermore, the Cretan spiny mouse (Acoms minous) has not been located anywhere else in Greece.

The gorge and its surrounding areas is also home to many species of birds and birds of prey, such as the Griffon Vulture (Gyps fulvus), the Bearded Vulture (Gypaetus barbatus), the Bonelli's Eagle (Hieraaetus fasciatus) and the Golden Eagle (Aquila chrysaetos), as well as two European species of crows, known as kokkinokaliakouda and kitrinokaliakouda.

The continuous human presence in the area is evident, as many Archeological remains are found in the area: prehistoric settlements, the city Kaino, the city Tara, the oracle and the shrine of Apollo; paleo-Christian graves, Byzantine temples, the old village of Samaria, at the heart of the gorge and Venetian fortresses.

In the north entrance of the Park, there is an Information Desk for visitors of the Museum of Natural History.

You can get to the entrance of the gorge from Chania by bus (there are also organized excursions) and then catch a ferry from Aghia Roumeli to Chora of Sfakia, and from there again to Chania by bus. The walking trail in the gorge is about 16 km (about 5 to 6 hours walking).