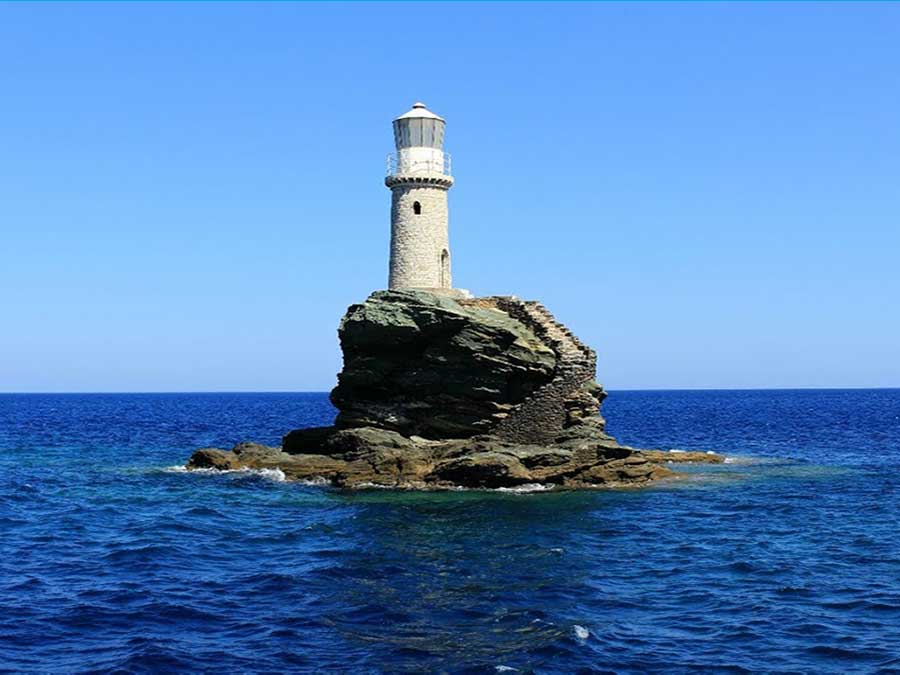 The Tourlitis Lighthouse is located off the coast of the Greek port of Andros. The picturesque structure emerges from the water and illuminates the sea of the Archipelago for more than 120 years. This is the first automatic lighthouse of the Greek light housing system and undoubtedly the most picturesque of all. It is also among the few in Europe, built on such a rock formation, in the sea. Originally constructed in 1897, it first operated in January 1, 1897. The tower is circular, 7 meters high with a focal height of 36 meters and a flare of 11 nautical miles.

Unfortunately, the lighthouse was destroyed during World War II after a German bombardment and was never restored to its original form until 1994. The bombardment left nothing behind other than ruins and a scaffold tower in its wake, but Greek oil tycoon Alexandros Goulandris and his wife Marieta funded the rebuilding of the Lighthouse to its original form, in memory of their deceased daughter Violanda. The new Lighthouse opened in 1994 and is a replica of the original. A flight of stairs carved into the rocks leads to the lighthouse, although there are no lighthouse keepers living inside. The replica became Greece’s first automated lighthouse, eliminating the need for an onsite keeper to operate the light. Since then, it has become one of the area’s foremost tourist attractions, offering great photo opportunities. It also became the first Greek lighthouse to be imprinted on a stamp as part of the series of stamps “Lighthouses of Greece”. Tourlitis Lighthouse is not open to the public and cannot be visited.

Tourlitis I. of Kastro Bay