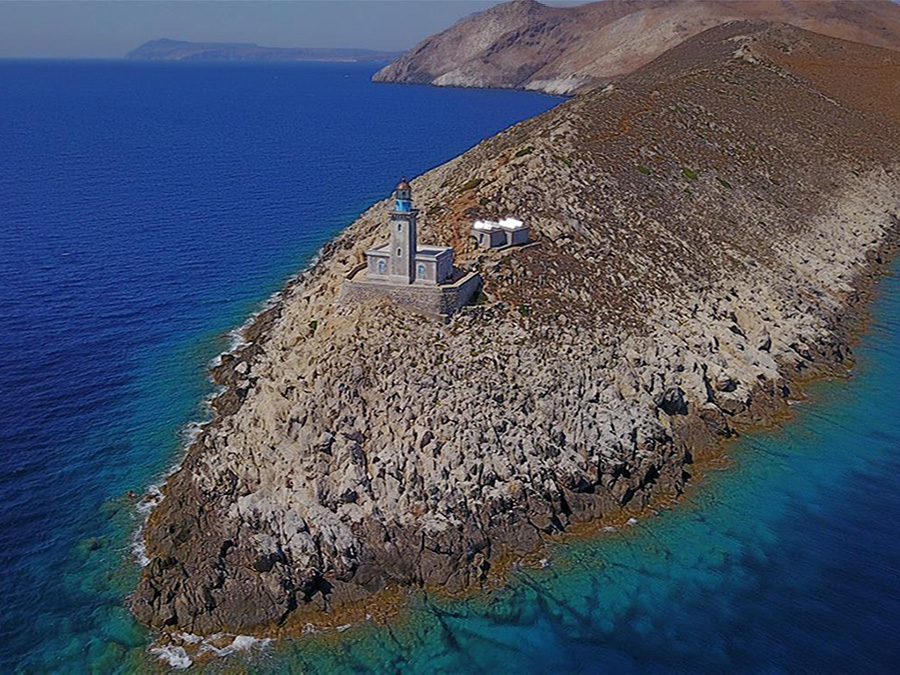 Cape Tenaro (Tainaro) or Kavo Matapas is the southernmost point of mainland Greece and the second southernmost point in mainland Europe. It is located at Mani region in Peloponnese and is the limit between the Messinian Gulf and the Laconian Gulf. The Cape Tenaro Lighthouse was constructed by the French in 1882 to help seamen spot the steep cliffs and mark the approach to mainland Greece. It was renovated in 1930 and extinguished during World War II. The lighthouse started operating again in 1947 and in 1982 the oil engines were replaced and the lighthouse became electrically operated. Last time the structure was renovated, was back in 2008 by the Aikaterini Laskaridis Foundation, following consultations of the Ministry of Mercantile Marine, the Ministry of National Defense and the Hellenic War Navy with the Lighthouse Service. The final study was approved by both the Foundation and the Lighthouse Service, as well as by the Modern Monument Service of Patras with the technical support of the School of Engineering of the Aristotle University of Thessaloniki.

The structure features a ground building with rooms, attached to a square stone tower with lantern and gallery. Measuring 16 meters in height and with a focal height of 78 meters that flashes two white beacons every twenty seconds, the lighthouse stands 40 meters above sea level. The lantern was once home to a mechanism designed by French company Sauter Lemonier back in 1887. The little house beneath it being the one that used to host the lighthouse keepers. It consists of three bedrooms and a corridor, covering an area of 155m². At least three lighthouse keepers worked there in shifts day and night, responsible for tending and caring the lamps and mechanisms.

The lighthouse can be reached via a challenging path which begins from the Byzantine church of Agioi Asomatoi built on the foundations of a temple to Poseidon. It is a beautiful 2 km walk along an uneven rocky path to one of Europe’s southernmost points, Cape Tenaro, where the lighthouse stands. It takes 45’-50’ minutes to get there with plenty of photo stops, and about 40’ minutes to get back. The path is very uneven and rocky in places with uphill and downhill portions so make sure to wear sneakers or good walking shoes. The scenery is stunning and the lighthouse offers striking views of the sea to the southernmost tip of Greece. The walk takes you past pretty little rocky beaches, the Temple of Poseidon and a Roman mosaic near the parking lot, just at the beginning of the hike. The lighthouse is closed to the public and there is nothing there apart from the view, however, Cape Tenaron and its lighthouse are worth a visit.