This imposing lighthouse sits atop the southernmost headland of Lefkada famous for the white rocks. Being a cape, it offers great views across to Ithaka, Kefalonia and other islands and a brilliant sunset if you arrive there late enough. You'll need your own transport and there is absolutely nothing there except the lighthouse and amazing panoramic views. The road is long but it is definitely worth the 1-hour drive. Cape Doukato or Lefkatas or Niras, is one of the most photographed parts of the island due to its wild scenery and breathtaking views. It is located 50 km away from Lefkada Town and 8 km from the village of Athani. Access is easy and there is a small parking lot 200 meters away from the structure.

The lighthouse was built in 1890 and powered with oil as a source of energy. During World War II, it was extinguished and started operating again in 1945. In 1950, it suffered severe damage as a result of a large earthquake and till 1956 operated with a temporary installation of an automatic asetyline torch. In 1986, the oil mechanisms were replaced, and the lighthouse became electrically operated. The structure features a circular stone tower with lantern, arising from a 1-story stone keeper's house. The tower rises 14 meters and its focal plane is 70 meters. You are not allowed to enter into the lighthouse but you can visit the garden and take some beautiful photos.

The location where the lighthouse of Doukáto lies, is linked to various legends and stories. The famous cape is one of the most known rocks of antiquity and is identified with the Homeric Lefka Petri. Lefkatas was an area of land having special spiritual significance to the ancient Lefkadians, who built there a shrine dedicated to the god of sun and light, Apollo. Every year, ceremonies were held to propriate the gods of the sea, at which there were even human sacrifices. It was also the place for those who wanted to escape from unfulfilled love. The cliffs of the cape carry the sad story of the ancient lyric poet, Sapho of Lesvos (7th century B.C.), who committed suicide by falling off the steep hills of the Cape to relieve herself from her unrequited love for Phaon. This is why the place is also known with the name ''Kavos Kyras'' (Lady's Cape) or ''Pidima Kyras'' (Lady's Leap).

Although the line between legend and real is hard to be distinguished, Cape Doukato is definitely a romantic place with a picturesque lighthouse, fine views and great photo opportunities. 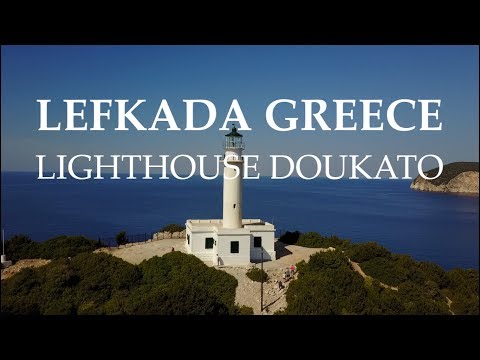