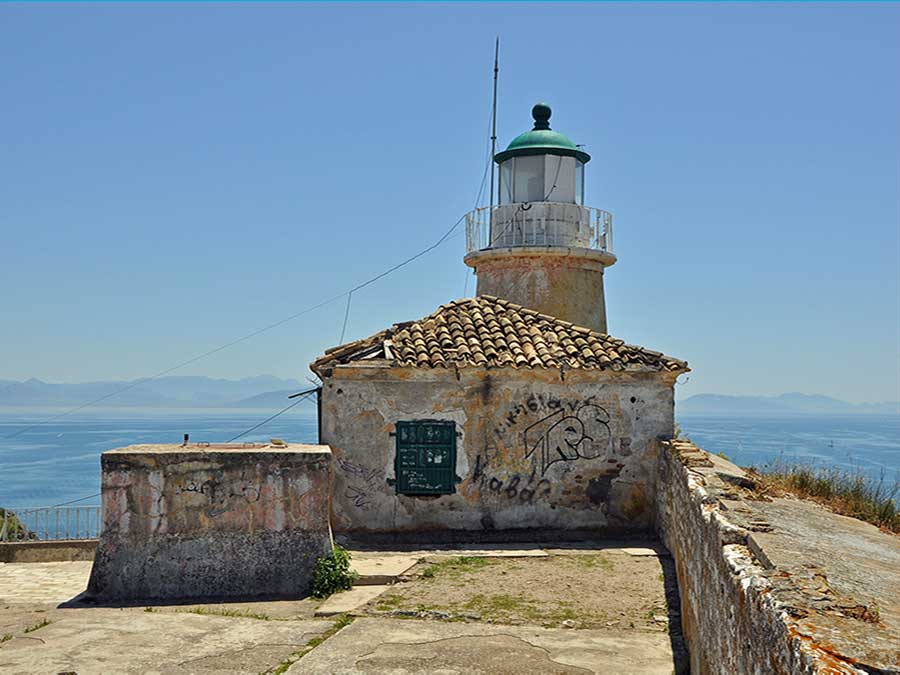 The conical stone lighthouse at Cape Sidero sits on the Venetian fortress overlooking Corfu Harbour. The Venetians cut a moat between Cape Sidero and the town when they built the fortress. The fort is an important archaeological site today and a historic site as well. Sidero light and its attached square dwelling were built by the British in 1822 to quide shipping into the British naval base in the Ionian Islands. It had a simple fixed light. A few years later the lighthouse was equipped with a new fourth order lens made by Sautter & Lemonier of France. In 1863 the lighthouse was ceded to the Greek government when the British left the Ionian Islands. The lighthouse along with much of the town of Corfu has suffered in wartime. In October 1915 the British merchant ship Sailor Prince was captured by a German U-boat near the lighthouse. During World War II the tower was damaged by the September 1943 German bombardment to drive out the Italian army. Nazis occupied the fort for a brief period and used the lighthouse as a lookout. Today the tower exhibits a modern beacon with a drum lens. The old obsolete Dalen Sun Valve that automatically turned the beacon on and off is still on the cupola. While the fortress is open and the lighthouse can be reached by climbing its battlements , the light tower itself is closed.

On the Fort of Sidero Point