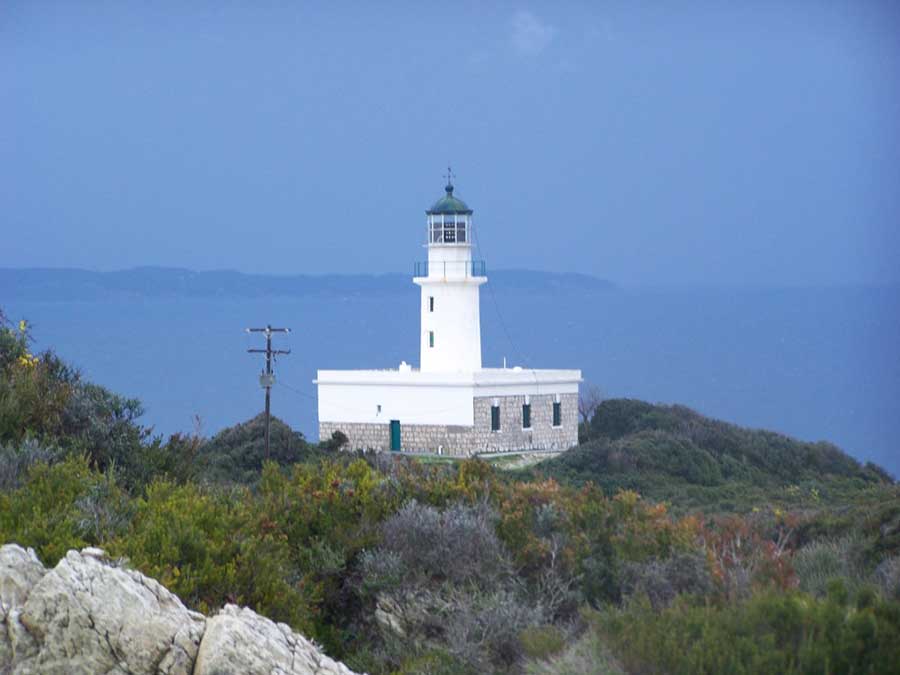 Othoni Island , nicknamed the Key to the Adriatic, lies about 11 miles (17 kilometers) northwest of Corfu Island. Othoni is the westernmost island in Greece and the northernmost of the Ionian Islands. It is one of the Diapontia Islands, satellites of the larger Corfu. The seas separating it from its mother island are usually quiet, but danger arises when the area receives strong westerly winds and cold air from Adriatic Sea. Perhaps it was a west wind that blew Odysseus to the island. Homer wrote in The Iliad that Calypso held Odysseus captive in a cave on Othoni Island. The Kastri lighthouse marks Othoni's western shore and is the northrnmost Ionian lighthouse. It is situated on a small islet near the island's heliport. The light is obscured by trees that have grown up on the island of Errikusa. The conical white tower rises from a square dwelling. It was damaged during World War II by bombs and looters and was unlit from 1941 until 1954. The kerosene beacon was then restored and served until 1985 when it was electified. At this writing , four resident keepers maintain the light. They are armed to protect the Greek border from intruders. The lighthouse is not open to the public. The altitude of tower is 13 metres and the height of focal plane is 106 m. Othoni Island is accessible only by boat. A ferry runs to Othoni from Corfu. From small port village of Othoni , a road leads to the northeastern poin of the island where the lighthouse is located.