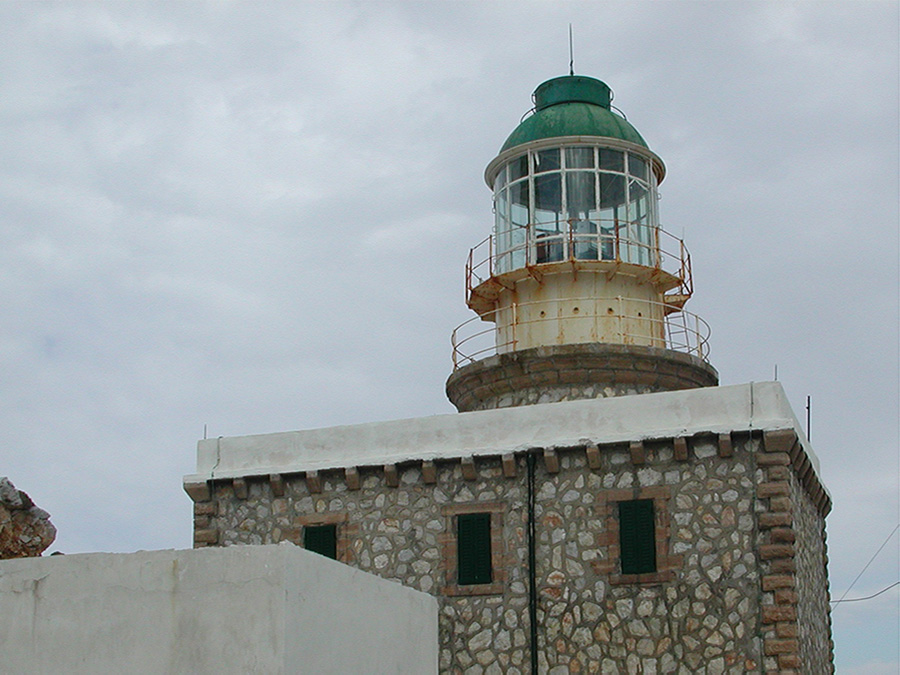 This beautiful traditional lighthouse was built in 1894 on a remote location in the southeast of Skyros Island on the Lithari Cape and is the only two-storey lighthouse in Greece. The lighthouse was extinguished during World War II and started operating again in 1949. Its first flashing Chance Brothers lens were fueled by kerosene and maintained by three lightkeepers until it was upgraded to a modern, self-sufficient beacon in 1988. The new light is powered by a photovoltaic generator charged by a series of solar panels, placed on the south side of the tower. The new mechanism flashes three white beacons every thirty seconds and has a focal range of 16 nautical miles. The lighthouse structure consists of a stone-built square building with a circular tower made of tough stone with a lantern on it. The lighthouse keeper’s house covers an area of 140m2 and has a ground floor with three rooms, a kitchen and a hall and an upper floor with two rooms and a kitchen. There is also a drinking water tank and a tank for kitchen use.

On June 15, 2012, the lighthouse was listed a monument by the Ministry of Culture and Tourism due to its remarkable architectural structure. It has played an important role in the safety of the navigation in the region and is connected with the naval tradition of Greece. Its original mechanism which includes the mechanical parts, wheels, swivel plate, timer and the Fresnel optical system has also been declared a monument as it is an "important technical and scientific evidence for the lighting systems of lighthouses in the late 19th century”. The Lithari lighthouse is not open to the public and cannot be reached via a road because the terrain is very rough but can be accessed by sea.