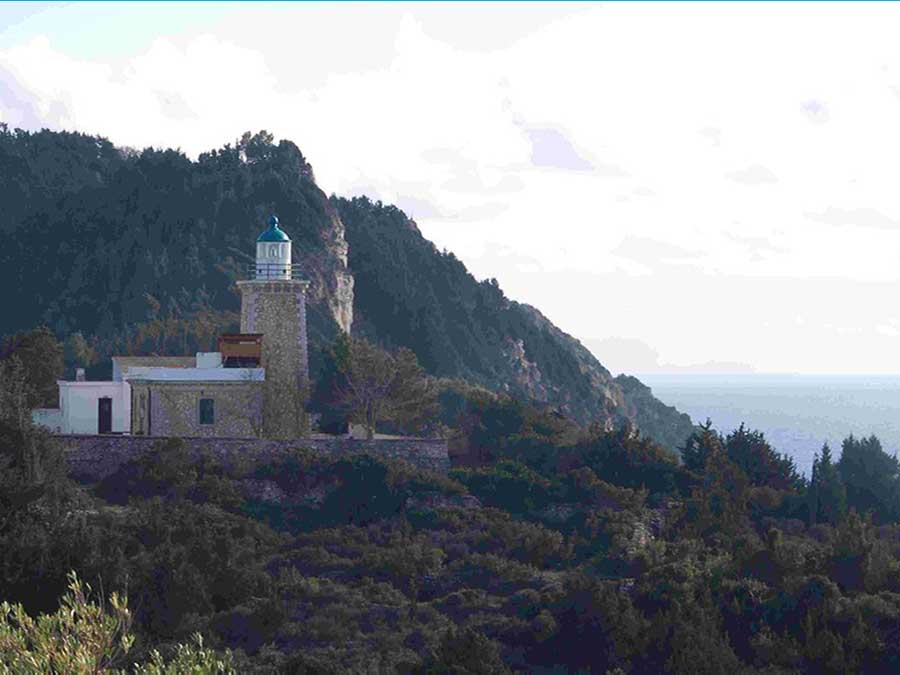 Paxoi is derived from Roman word for "slate" and the Lakka is the name of a wood found in the area. The original Lakka lighthouse was built by the British in 1825. On March 24, 1913 , a seismic landslide occurred directly under the lighthouse causing it to collapse. The ravine created by the earhtquake was 656 feet (200 meters) long and 66 feet (20 meters) deep. The entire lighthouse fell into the crevasse and was covered by dirt. Miraculously the three keepers and their families escaped harm. It was an unseasonably hot day and they were having lunch outside under a stand of olive trees away from the tower. After the calamity, the need for a replacement lighthouse was critical, but World War I delayed work. Studies began to locate a place at Lakka that had no fault line beneath it. The site selected was at Kouera and the lighthouse of 9,1m height was built there. The new beacon went into service in 1919 and was equipped with a flashing white Barbier, Benard & Turenne lens. The current beacon is visible for 20 miles (32,2 kilometers) and can be seen well into the shipping lanes to the west. The square truncated stone tower is attached to a single story dwelling. The prevailling northwest wind of the Ionias (maistros) scours the area. The shoreline's many caves attest to the constant intrusion of seawater. The large cave Ipapanti is a popular destination for tourists who travel to it by water taxi passing the lighthouse. The cliffs of Erimitis are near the lighthouse too and many olive trees surround it. The lighthouse is not open to the public but the grounds are easy to access from Lakka via the only paved road on Paxoi, funded by shipping magnate Aristoteles Onassis a frequent visitor to the island and to the lighthouse. The distance from capital of the island (Gaios) is about 10 Km.