The small church of Panagia Makrini of the 9th century AD, is built in a cave on the west slope of Mount Kerkis on the island of Samos. The view from its courtyard is one of the best on the island.

Its history starts much earlier than the 9th century, when Saint Paul Patrinos practiced asceticism at the Pythagoras Cave on Mount Kerkis. He urged new ascetics to settle and re-establish 3 Lavras (small monasteries) that pre-existed on the northwestern part of the mountain. The monasteries had suffered significant damages by Muslim raids. According to the local historian and writer Epamineondas Stamatiadis, those 3 churches were Panagia Makrini, Agios Georgios and Agios Charalambos located southwest of the village of Kallithea.

The interior is decorated with well-preserved 14th century frescoes. An inscription at the western entrance, states the date August 16, 1764, probably the date of its construction. The church is 4 meters long and 2 meters wide while the cave in which the church is built is 15m height with an area of 25m². Below the cave there are troughs and jars where holy water is collected, dropping from the stalactites. The church is dedicated to the Assumption of the Virgin Mary and celebrates on August, 15. It has been declared an historic listed monument since 1999.

The church can be reached via a 500 meters long path that starts from the chapel of Agia Aikaterini in Marathokampos area. The path is very well maintained and well-signed with continuous cross-shaped markings so as not to get lost. 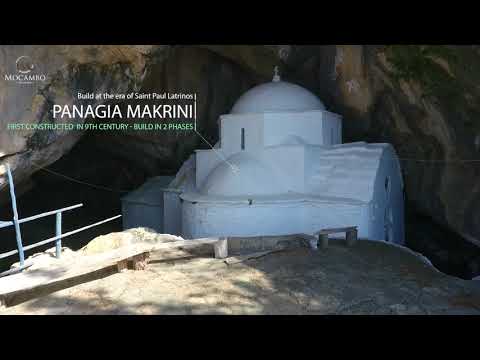