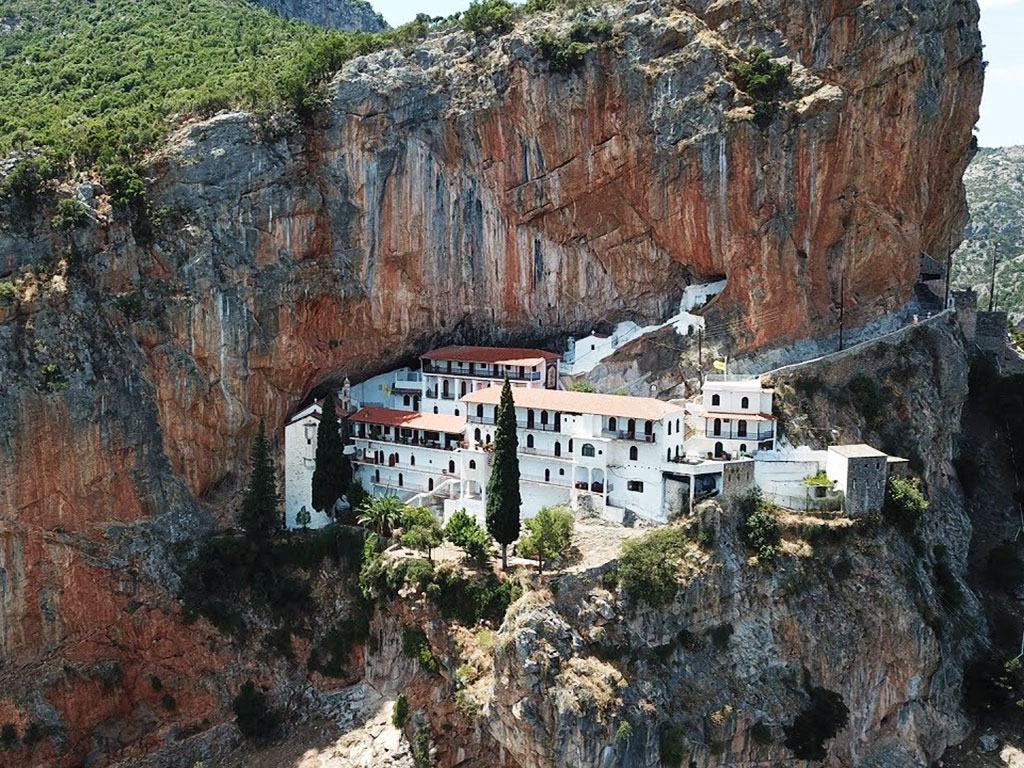 Built in the middle of a giant rock in Daphnonas Gorge, the Monastery of Panagia Elona seems like it is floating in the air. It is one of the most beautiful monasteries of Arcadia and offers fine views to the mountains and the gorge beneath. Thousands of pilgrims from all parts of Greece visit the monastery every year to honor and worship the miraculous icon of the Virgin Mary. The monastery was originally dedicated to Zoodochos Pigi but since 1797 has been dedicated to the Dormition of the Virgin Mary. It celebrates the Dormition of the Virgin on August 15th and 23rd but its main feast is on November 21st. It is open every day and the entrance is free.

According to tradition its name is related to the people from the village Elos in Lakonia who sought refuge here, bringing with them the holy icon of the Virgin which is considered to be the work of Luke the Evangelist. Another theory states that it was named after the area in which the icon of the Virgin was found. The monastery’s foundation date is unknown, but it is believed that the first to settle here were the monks Kallinikos and Dositheos in the 15th century. Written documents dating back to 1730 certify the existance of the monastery in the 15th and 16th century.

During the Turking occupation suffered severe damages and pillages; yet played an important role supporting and financing the Greek revolution. From 1836 started to flourish again, regaining gradually its former glory. Initially hosted monks but since 1971 has turned into a nunnery. In recent years, the monastery was renovated and today still stands there as one of the most important religious monuments of Arcadia and a proof that Greeks have always had a keen eye for location when it came to building temples and monasteries.

The monastery is located halfway between Leonidio and Kosmas. You can get there via the coastal road from Nafplio to Leonidio. The road turns inland and heads up to the mountains. It is narrow with some hairpin turns and a parking lot at the end where you may find stands selling local products, including honey and extra virgin olive oil. There is a long staircase that descends down to the monastery complex and chapel. The place is very peaceful with a spiritual reflection. The chapel itself is lovely and smells like honey from the bees’ wax candles. Photos are not allowed in the chapel but you can take some really beautiful photos from the hanging balcony with the magnificent view. Next to the chapel is an old hermitage in a rocky cavity.

The monastery complex includes a three-storey building with cells and guesthouses on the first floor, dining rooms, a reception area and some storage rooms below. The buildings are built in various levels and are connected with stairs and corridors. The catholicon is a small basilica built in 1812 with no aisle nor any wall paintings. It only hosts a marvelous wooden iconstasis and a tower bell on the roof which was added in 1831. The interior is filled with relics, gospels and specials in honor of the many miracles made by the Virgin. The complex is fed with water coming from the rock and is collected in cisterns west of the chapel. Panagia Elona is an impressive monastery and a place worth visiting if you are in the area. 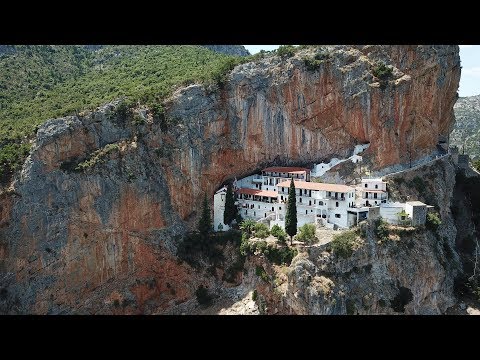