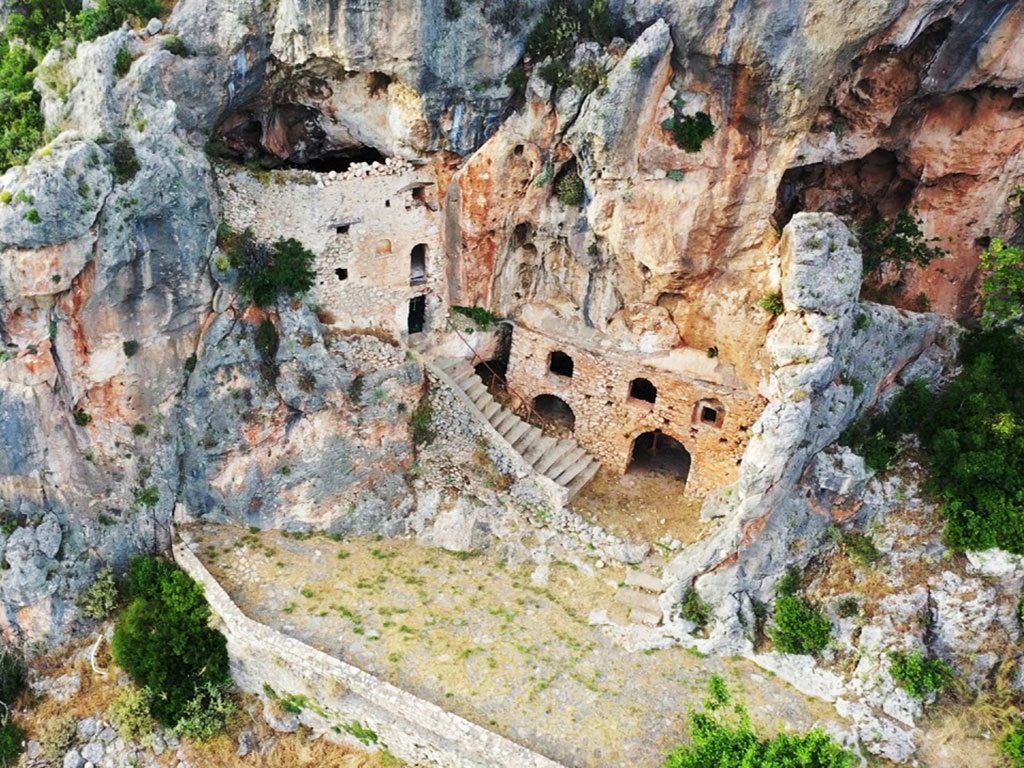 The old monastery of Vrontamas or Paliomonastiro as it is called, dating back to the 13th century is located close to the small town of Vrontamas in the prefecture of Lakonia. Inside a steep cliff, on the west side of the ravine of the river Evrotas, Paleomonastiro is one of the most historic monuments in the Laconian land.

The monastery built around 1100 AD and was dedicated to Theotokos Zoodochos Pigi, but also to Agios Nikolaos as well as to the great martyr Nikitas. The interior of the church is  decorated according to the Byzantine style. It is believed that the frescoes belong to four different eras. This is because of the diversity of the subjects as well as of the dress way of the Saints. It is worth noticing that the hagiographers have managed to to render intensely each event, using rich colors and representations giving a special interpretation and meaning, a sample of highly painting culture.

In September 1825, during the Greek revolution against the Turks, Ibrahim with the help of the Egyptian pasha Mohammed Ali, arrive in Vrontamas. There, they find an empty village. The approximately 300 to 400 inhabitants of the village, trying to be saved from the Turkish-Egyptian army, find refuge in Paleomonastiro. Unfortunately, the Turks find them and fight to occupy the monastery without success. Ibrahim Pasha asks them to surrender themselves and sign pilgrimage cards in exchange for their freedom, but they, having faith in God and love for their homeland, strongly resist.  On the morning of September 15, after three days of siege, the martyrdom epilogue is written for the proud people of Vrontamos, after the Ottomans manage to dig holes in the roof of the cave and desecrate the sanctuary, blowing up the monastery, handing over men, women and children to flame of fire.

Paleomonastiro was designated in 1958 by the Greek State as a Historical Monument. The monastery is located at a distance of 5 km from the village of Vrontamas towards the village of Skala. You can drive up to a point. Then you have to walk for almost 10 minutes, on a paved road till you reach the monastery. In order to enter the monastery you must come in contact with the priest in Vrontamas.