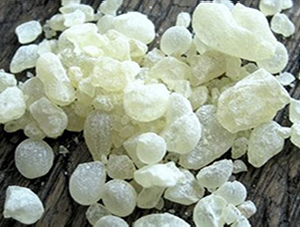 «Chios Mastiha: A tear that pleases, perfumes, relieves, heals!» Chios Mastiha is the name of a resinous sap produced from the mastic tree (Pistacia Lentiscus var. Chia). It is a natural, aromatic resin in teardrop shape. Chios mastiha has been recognized since ancient times both for its distinctive aroma and its healing properties. It has been recorded as the first natural chewing gum in the ancient world. Since 1997, Chios mastiha has been characterized as a Product of Protected Designation of Origin (PDO). 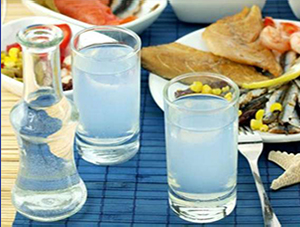 The traditional Greek Ouzo is made from the alcohol found in marc or other local products, to which herbs and other ingredients such as coriander, angelica root, aromatic herbs, cinnamon, anise and lemon blossoms are added. This mixture is boiled in a pot and regulated by connoisseurs. The final preparation is cooled and stored for several months and then dissolved in approximately 80% or 40% alcohol. The homemade ouzo is usually made particularly strong with 80% alcohol.When Ouzo is mixed with water it becomes white and opaque. This is because the anise, when mixed with appropriate proportions of alcohol, dissolves and becomes transparent. When the content of alcohol decreases, essential oils are converted into white crystals which are opaque. Ouzo is under the protection of the European Union as the exclusive product of Greece. As a traditional product, it is subjected to half the tax than other spirits sold in the European Union. At the same time it became a customary accompaniment for seafood and fish. Chios abounds in spices and aromatic herbs, which help to produce a light and smooth ouzo, based on the classic anise and fennel in a background of coriander as well as the unique mastic, depending on the recipe. Clearly distinct from the local raki, called ‘souma’, which is produced with figs, the Chian ouzo is still distilled largely in small copper stills of traditional family firms. The Chian ouzo is produced by local families on the island that continue the tradition for many years. Its production has not been industrialized, it is not produced in large quantities and therefore is not easily found outside the borders of the island. 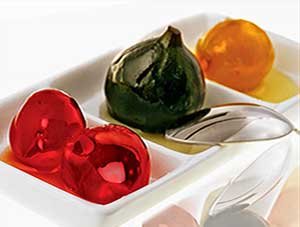 Famous since antiquity for the excellent quality of its products, Chios produces abundant and various fruits. Grapes and figs were the basis of this variety, to which a number of other products were gradually added: almonds, pistachios, walnuts, apples, quinces, sour cherries, cherries, and later citrus fruits, such as bitter oranges, the world-famous mandarins of Chios, oranges, bergamots, citruses, etc. Many conservation methods have been applied to these sweets, with a view to achieving the longest possible period of fruit consumption. The safest and simplest method, which emerged, was their boiling and subsequent maintenance in some form of syrup. Depending on the herbs, spices or other substances added to the boiling water, several recipes have been developed. After the introduction of industrial sugar, the use of ancient Mediterranean sweeteners – honey, grape syrup, carob syrup, etc. – gradually receded. Great impetus was given to the preparation of preserved sweets, firstly at home, then at cottage industries, and later at larger and better organized craft industrial units, always however retaining the traditional recipes. Sugar came to us from the East and brought with it its secrets. Later, the Persian and Arabian recipes were blended with our own, in a very pleasant and tasty result. The Chios mastic, exclusive only to the island of Chios, was mixed with sugar to form the Mastic sweet, a different and fragrant form of vanilla toffee, also known as "submarine". This sweet has been widespread since the last century as a welcome sweet in the bourgeois homes of the Greek diaspora. This is particularly true in Istanbul, where under the name "White Sweet", it continues even today to be the official sweet of the Patriarchate. 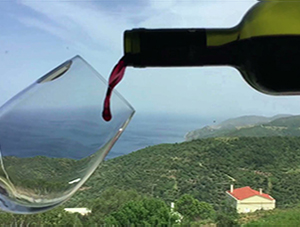 A famous and remarkable Chios product is wine. According to the historian Theopompos, the son of God Dionysus, Oinopeon taught the people of Chios how to plant and cultivate vineyards and how to produce wine. The high quality wine produced here in the ancient times was known as “Ariousios Oinos”. The ships would transport and trade it in amphorae all over the known world. It was also famous during the roman and byzantine years. Recently the production of Ariousios Oinos has been revived thanks to investments in wine making especially in northern Chios. 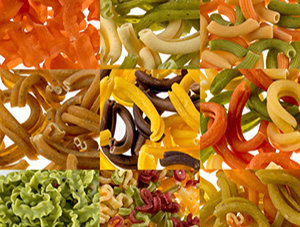 The gastronomy of Chios includes various types of pasta, which offer tasteful specialties and delights, combined with a variety of meat and seafood. These species, which are produced by local cottage industry, are as follows: • Curly taliatele with mastic, which accompany fine white meats as well as white sauces with blends of traditional cheeses. •Cherisia spaghetti, the well-known handmade pasta, perfectly suited to cooked, reddish food, but served with freshly sliced ​​tomatoes and olive kernels. • Striftaria with mandarin of Chios, pasta that are successfully combined with white meats and seafood. • Twisted Fitilaki, local pasta for all tastes. 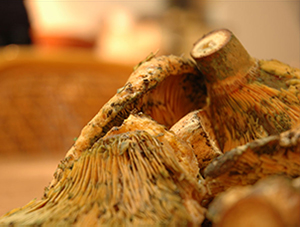 Amanites is a kind of mushroom that grows mainly in the north region of the island. The best time to collect Amanites in Chios is in the autumn, after the first rains. They are usually found under pine trees. Amanites are usually fried, and they are considered a very delicious meze for ouzo. 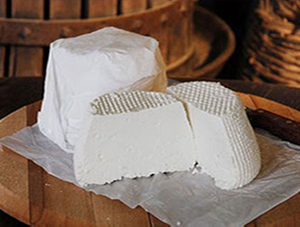 Soft Cheese of Chios is a traditional island cheese. It is made of full fat cow or goat milk that is produced locally. This cheese is not excessively salty, and it is ideal for creative fried or grilled cheese dishes. It may also be consumed in salads or uncooked on its own. Typically produced in circular molds of approximately 900 g. Chios soft white cheese is available in local groceries stores and super markets. It is also served as a local dish in most restaurants and taverns in the island. 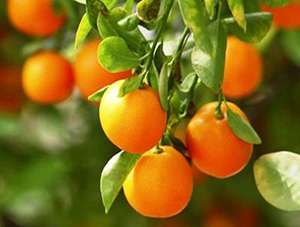 Mandarin of Chios is one of the most fragrant in the world, even when it is unripe. It is a distinct product of Greek land, which from 2012 adorns the list of products of the Protected Geographical Indication (PGI) of the EU. So it is cultivated exclusively in Chios, Psara and Inousses. It is so fragrant that when you eat it becomes noticeable hours later, it gives you its long lasting aroma. The abitants of Chios make it sweet, jam, liqueur, add it to syrups, pastels, almonds, juices, even in classic bean soup. The secret of the aroma of Chios lies in its essential oils. Its cultivation finds the best conditions in Chios, which has the most hours of cloudless clouds across the country. The skillful techniques of harvesting and preserving the fruit followed by the abitants of Chios also play a role. 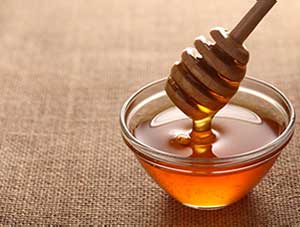 The Chian honey is considered among the best in the world because of the very rich and rare flora that is typical of the island. Three types of honey are mainly produced in Chios: The flower honey with a distinctive flavor and aroma of citrus fruit, the pine honey that is also known for its wonderful aroma, and the brighter and thicker thyme honey. 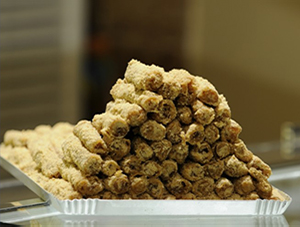 The Masourakia are of two kinds. The white, stuffed (walnuts, almonds, etc.), flavored with the Chios floron, wrapped in thin crust and sprinkled with powdered sugar and syrupyas, sprinkled with chopped almonds. 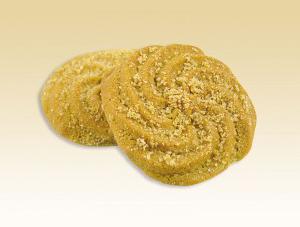 Amigdalota are the traditional well-known wedding treats of Chios, accompanied by handmade soumias. It is made from white almonds, meringue and bitter almond flavor. In double almonds add the soft mastic cream between two pieces of almond. 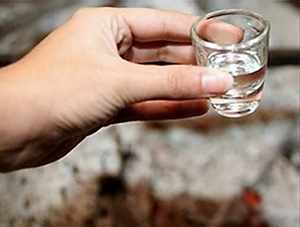 Only in Chios is the distillation of figs, the famous souma. Mixing it with different fruits defines its name, but also gives it its unique aromatic character. Its distillation is considered a great social event and great joy. The traditional drink of Chios, the souma, is based on the dried figs. Only here and in no other part of Greece. Its distillation is a celebration in which everyone is invited. 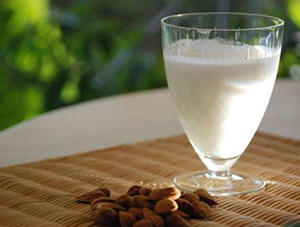 Sumada is a white soft drink, made from almond emulsion. For the preparation of the soumada, peeled almonds, after grinding or rinsing, are left for a period of time in water which absorbs their juice. After draining them, the water boils with sugar added until the syrup is tied. This syrup is then dissolved in water and offered cold as a beverage. In Greece, soumada is considered to be a wedding drink because of its color and is therefore offered mainly in weddings. 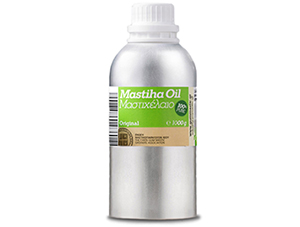 Mastic oil is produced by distilling natural mastic with steam. It is a 100% natural product and contains an excellent variety of therapeutic and aromatic ingredients. It is a key ingredient in health and care products: antiseptic creams, antibacterial solutions, oral hygiene products and body care products. It is also used as a perfume in food production (confectionery, pastries, ice creams, beverages, etc.). 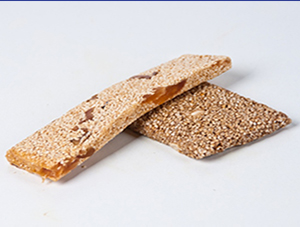 Pasteli of Chios standard is commercially available and is known everywhere. But if you come to a fair, do not neglect to buy it from the itinerant vendors that make it up and are unique in taste. 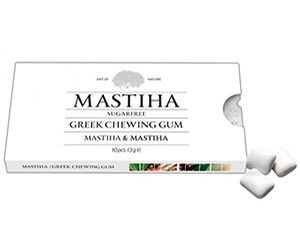 It is the natural continuation of the first chewing gum of the ancient times, which the Eastern Mediterranean people chewed on to clean the teeth and the freshness of breath. 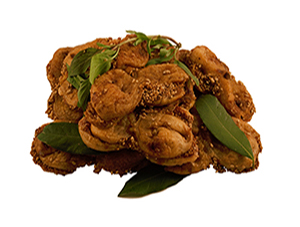 Made from figs of Greek origin, stuffed with almonds, sesame seeds and spices.