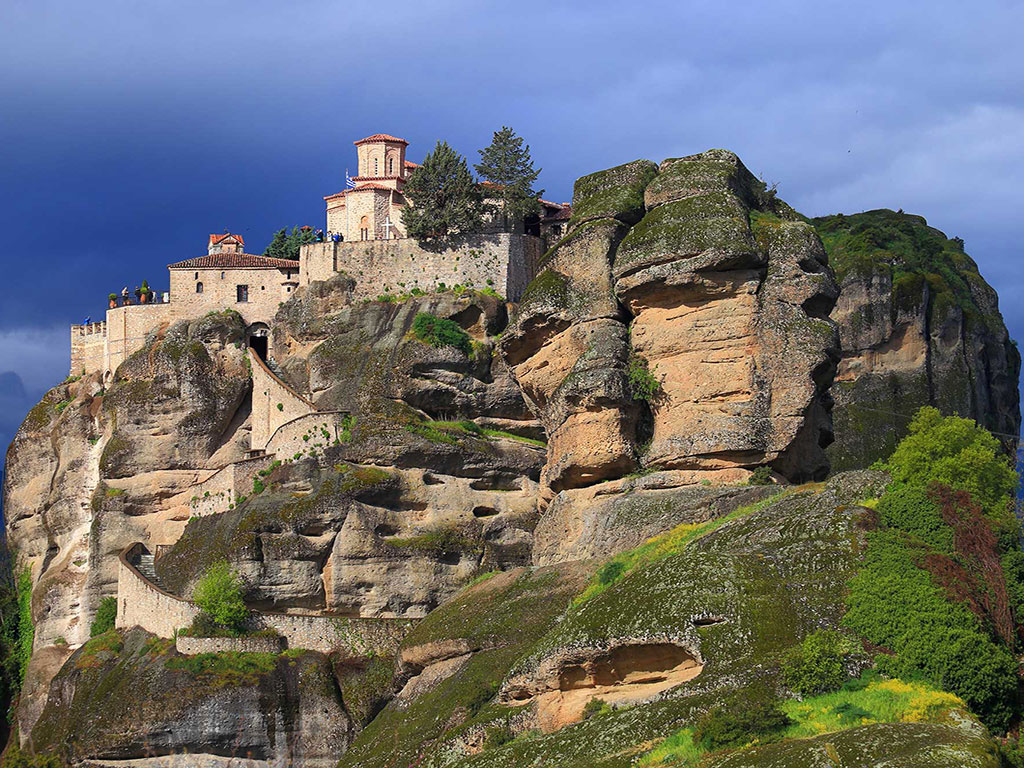 Varlaam Monastery or Monastery of All Saints is a male monastery founded in the early 16th century. It was named after the ascetic Varlaam, who climbed on top of a rock where he established a cell for himself and built three small chapels and a water tank, back in 1350. After his death the monastery remained abandoned for almost 200 years. In 1518 two brothers from Ioannina, the monks Theophanes and Nektarios, the so-called Apsarades settled there and renovated the small chapel.

Over a period of twenty-two years using a tower, a rope basket and a pulley system they hoisted the materials needed for the construction of the monastery. After having all the materials in place, the built the monastery and the katholicon in 22 days. The katholikon is of the Athonite style, topped with a dome and is dedicated to All Saints. It was built in 1541/1542 and decorated in 1548 with beautiful frescoes, painted by the famous hagiographer of the 16th century Franco Catalano. The chapel of the Three Hierarchs is a small single-aisle basilica, built in 1627 and decorated in 1637 with murals. The old refectory has now been turned into a brand-new museum with religious painted icons, over 300 valuable manuscripts, holy vestments of the priests from the Byzantine period, intricately carved wooden crosses and many other ecclesiastical treasures. The museum is very informative and the shop has a wide variety of products. The monastery was occupied continuously throughout the 16th century and into the 17th after which it began to decline. Today, the monastic community consists of less than 10 monks.

Initially, the only way to enter into the monastery was with the use of a pulley system with a long rope and a basket which is still used today for lifting people and goods up to the tops. Wooden ladders were added later to make it easier to enter and finally in 1923, the monks carved into the rock 195 steps, that today lead safely to the top of the rock where the monastery sits.