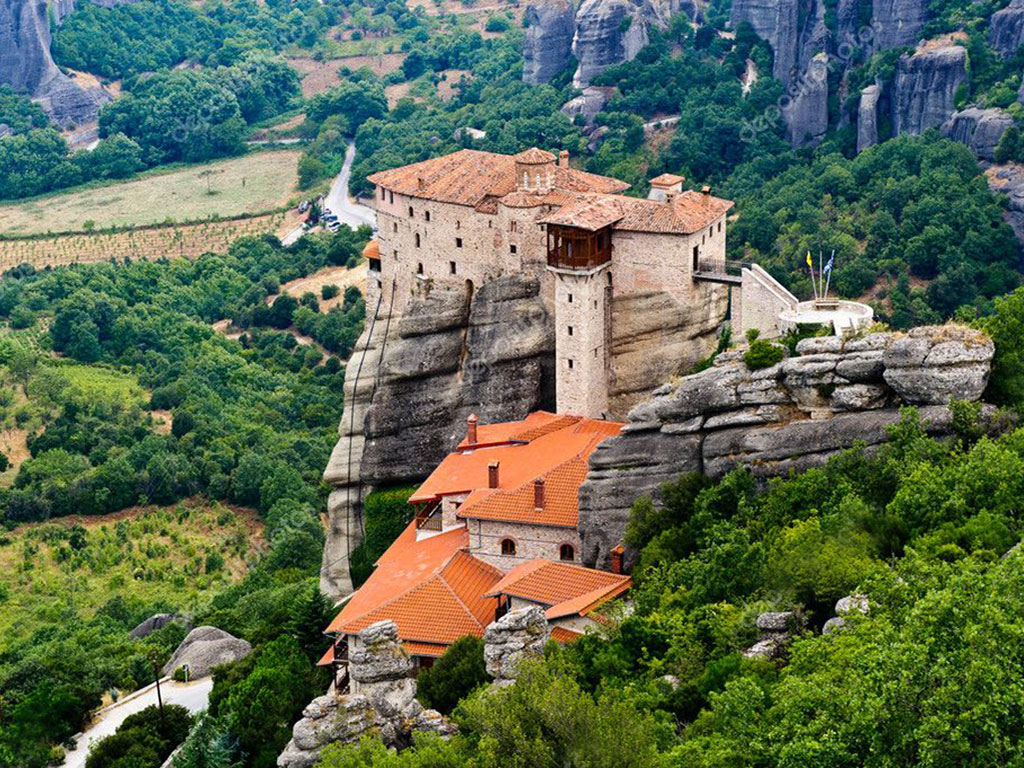 The rock, on the top of which the monastery is built, is vertical, steep and narrow. Visitors are impressed when they see it from a distance. The monastery spreads all over the surface of the peak of the rock and it gives the impression of a single construction. The present construction shape was formed during the third decade of the 16th century. The monastery has three floors. The katholikon and the cells are on the ground floor and on the other floors there are reception halls, the “archontariki” (=guest quarters), the exhibition room, other cells and subsidiary rooms. On the base of the rock, rooms for other use (workrooms, library etc) are built.

According to other information the monastery was founded in 1388 by the priest-monks Nikodemus and Benedict. In 1530, the priest-monks brothers Ioasaph and Maximus from Ioanina built the katholikon on the ruins of the even older church of the Transfiguration and they renovated the monastery. During the eighties the Rousanou Monastery was restored and totally renovated by the responsible Archeological Service of the region. Today it operates as a convent with 13 nuns.

It is possible that the monastery was named after an old ascetic called Rousanos who had lived on the rock. According to another theory it was named after two Russian monks who built it.

Access to the monastery was difficult. The first monks climbed. Afterwards ascent was made by rope-ladders and nets. Ascent made by nets lasted about 30′ and it was very difficult. Nowadays it is easy to reach the monastery. You have to ascend stairs of cement and cross two little, solid bridges that were made in 1930 and replaced the wooden bridge made in 1868.

The katholikon,that was decoreted in 1560, is dedicated to the Transfiguration of Christ but honoured to St. Barbara. Her memory is devoutly celebrated on 4th December. The church is little and elegant. Because of the peculiarity of the rock the sanctuary looks to the north instead of looking to the east according to custom. It is in the Athonite type. It belongs to the cruciform distyle type with a dome in the centre and two conches (for the chanters) on the right and on the left side. The dome is polygonal, it bears a single-lobed window on each side and it dominates due to its height. The narthex is covered by a vault and it is fully decorated with well maintained Byzantine frescoes.
Summer opening hours (01/04 – 31/10): 09:00-18:00, Closed: Wednesday
Winter opening hours (01/11 – 31/03): 09:00-14:00, Closed: Wednesday