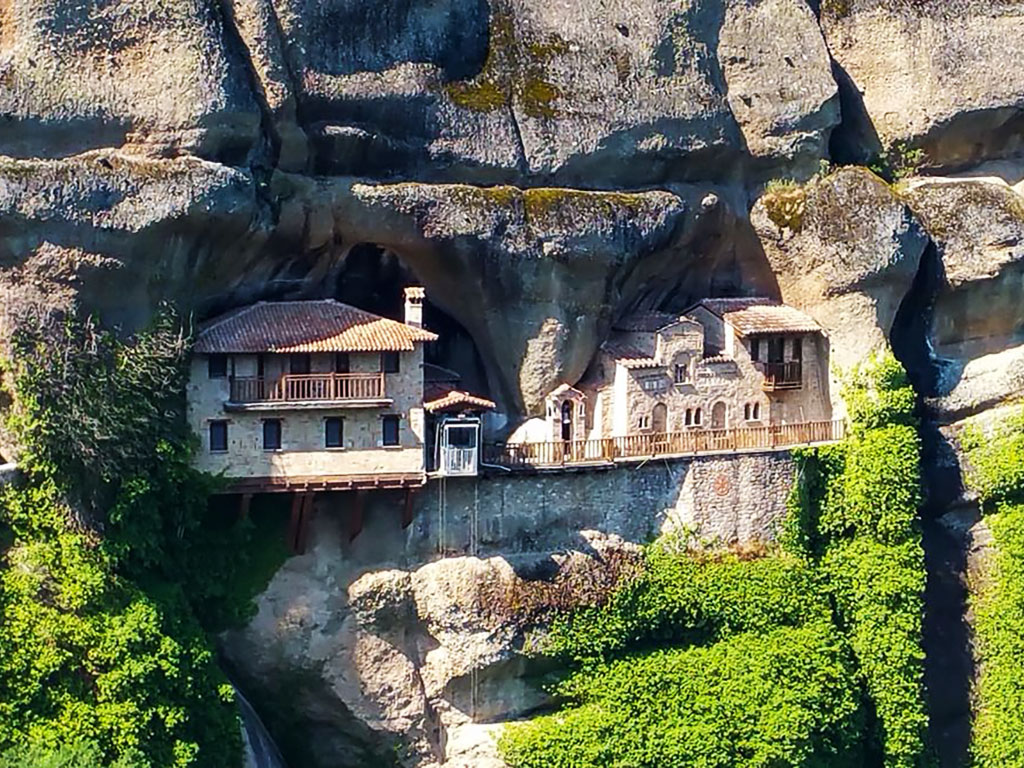 The monastery was built high in a cave on the edge of a steep cliff, at a height of seventy meters. It looks more like an "eagle's nest" and can only be reached by a dirt road or hiking, while in the past the ascent was done by a hanging wooden staircase. The holy monastery of Ypapantis or the Ascension of Christ, belongs to the restored old monasteries of Meteora.

According to historical data, the candles of the Holy Monastery of Ypapanti remained extinguished for many years, until the metropolitan of Trikki and Stagi, Polykarpos in 1930, took care of the reconstruction of a carved staircase, making it much easier to climb this cave. In fact, in May 1948, due to erosion, a large part of the rock fell, making the cave monastery more accessible. Today, this carved staircase has a number of steps. Historical texts state that the monastery was built in two small caves, separated by a volume of one meter to the abyss. In fact, as it is emphasized, the ascent was done with a ladder with sixty steps.

It is worth mentioning that the monastery of Ypapanti, is built high in a rock cavity in the northern part of the area of ​​Meteora. On the eastern side of the same rock are the ruins of the monastery of Agios Dimitrios. The main temple is a single-aisled, cruciform basilica and is one of the oldest temples of its kind. The monastery does not follow the established order in its development, but develops over time according to its needs. The temple was originally placed near the entrance. Later, however, the entrance was forced and the temple is now far from it. It is a monastery inhabited from time to time by a few monks, who took full advantage of the existing surface and increased it by creating protrusions.

The holy monastery of Ypapanti began to decline at the beginning of Ottoman rule. The "Chronicle of Meteora" (written in 1529) mentions the information that several quiet monasteries were in the hands of secularists and were disappearing. For eighty-six years, Ypapanti was robbed in a robbery manner by a specific family, to which reference is made.