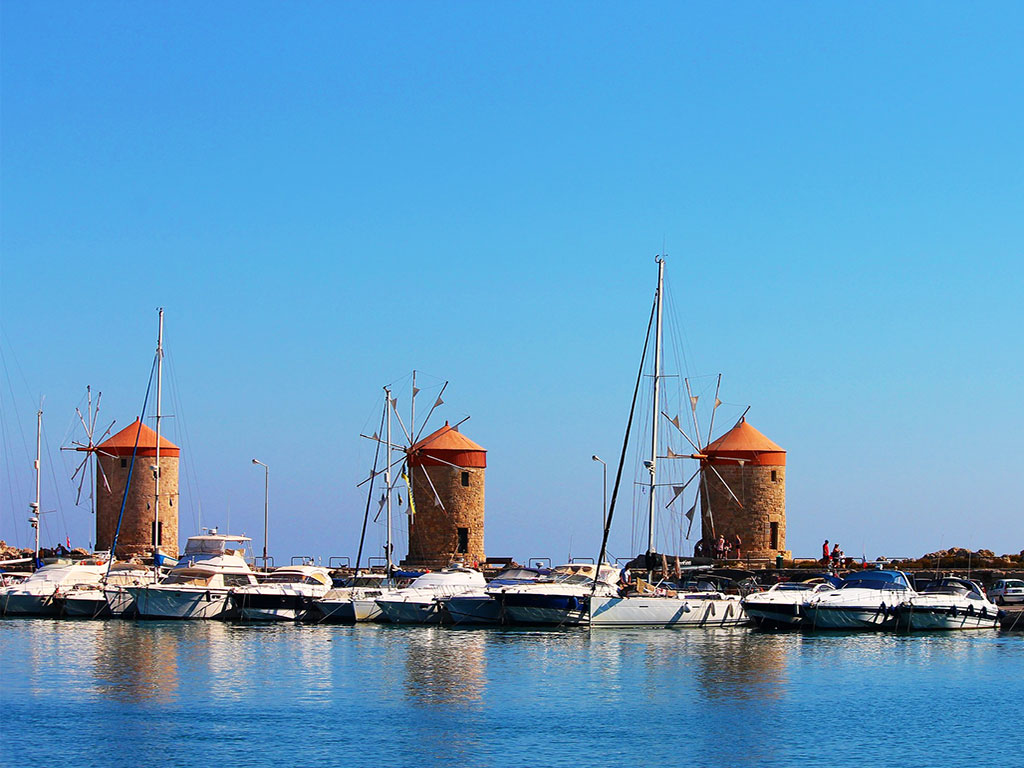 The most famous 3 mills on the whole island of Rhodes are located on the east mole of Mandraki harbour. They are standing next to St. Nicolas Fortress and revealing a lot of history about the area and especially about Rhodes Town itself. Recent excavations have uncovered the foundations of five more mills, built on the rocks. Early maps and a famous 1486 woodcut show some 18 stone tower mills, located around the harbour used to grind corn for export but most of them have disintegrated over time. All have a single pair of overdriven millstones and cylindrical stone tower evolved with a distinctive type of rotating timber cap.

The mills were constructed by Genoese prisoners probably before the port being fortified, by Grand Master Diedoné de Gozon in the 14th century. The first written reference to the windmills of Rhodes is by the traveler Priester aus Frankfurt, who visited the island between 1350-1370. From then until 1519, there are many more references to the windmills by many other European travelers, providing relevant information. According to them the mills looked like fortified towers carrying six sails. After the fortification of the port by Grand Master Diedoné de Gozo in the 14th c. and by Grand Master Jean de Lastic (1437-1454), the mills were included through the walls and started serving as windmills and fortification towers at the same time. They were in operation day and night, fact that shows the special importance they had in the economic and productive process.

Three of these beautiful structures have been renovated and stand as majestic reminders of times past. Today these iconic windmills have become a harbor landmark, can be seen from most parts of the harbour and are pleasing to view and walk by. Right in front of the windmills are benches on which to relax and enjoy the view across the harbour. It is a great spot to take some good photos.