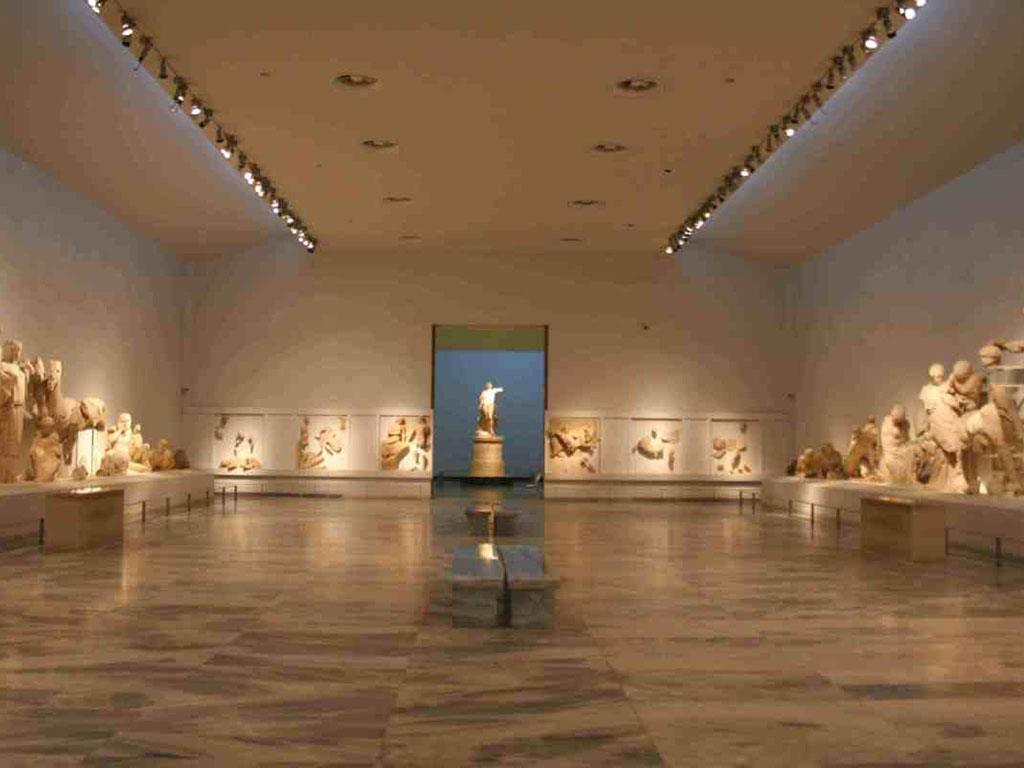 The Archaeological Museum of Olympia, one of the most important museums in Greece, presents the long history of the most celebrated sanctuary of antiquity, the sanctuary of Zeus, father of both gods and men, where the Olympic games were born. The museum's permanent exhibition contains finds from the excavations in the sacred precinct of the Altis dating from prehistoric times to the Early Christian period. Among the many precious exhibits the sculpture collection, for which the museum is most famous, the bronze collection, the richest collection of its type in the world, and the large terracottas collection, are especially noteworthy.

The museum building comprises exhibition rooms, auxiliary spaces and storerooms. The vestibule and twelve exhibition rooms contain objects excavated in the Altis. The auxiliary spaces (cafe, lavatories) are located in the museum's east wing; a separate building between the museum and the archaeological site houses a book and souvenir shop. Finally, part of the east wing and the basement are dedicated to storage and conservation of terracottas, bronze, stone, mosaics and minor objects.

The Archaeological Museum of Olympia, supervised by the Seventh Ephorate of Prehistoric and Classical Antiquities, was reorganized in 2004 to meet modern museological standards.
History

The Archaeological Museum of Olympia, also known as New Museum, was designed by the architect Patroklos Karantinos and built between 1966 and 1975. Olympia's Old Museum, a neoclassical building erected with funds granted by the benefactor Andreas Syngros on a hill west of the Altis in 1885, had suffered greatly from the many earthquakes, which hit the area. Furthermore, the wealth of finds from the continuing excavations by the German Archaeological Institute made the construction of a new museum necessary. Nikolaos Gialouris, then Ephor of Antiquities, Ismini Trianti, S. Trianitis, the celebrated sculptor and conservator, and their colleagues, organized the new exhibition, considered cutting edge for its time. The exhibits were gradually moved from the Old Museum and the New Museum was inaugurated in 1982 by Melina Merkouri, then Minister of Culture. S. Triantis undertook the difficult task of mounting the statue of Nike by Paionios, which was presented to the public only in 1994.

Thirty years later, on the occasion of the Athens Olympic Games of 2004, the exhibition of the sanctuary finds, particularly the bronzes and Roman sculptures, was reorganized. In September 2003, the exhibits were packaged and the exhibition galleries, service areas and storerooms were renovated and enlarged. The new exhibition, which follows more or less the philosophy and principles of the old one, was inaugurated on March 24, 2004. The prehistoric collection, the bronze collection, the large terracottas collection, the Hellenistic collection and the collection of Roman statues were all reorganized. A new gallery was created for the Workshop of Pheidias, while the gallery of Hermes was enlarged to allow the statue room to 'breath' and the statue itself was given high-tech anti-seismic protection. Finally, the museum's last gallery, which housed an exhibition relevant to the Olympic games, is now dedicated to the last years of the sanctuary. The old offices of the Seventh Ephorate of Prehistoric and Classical Antiquities in the museum's east wing were converted into storerooms for the bronze collection, while its previous storeroom, also in the east wing, was converted into a cafe. New cases with state-of-the-art artificial lighting were placed in all of the galleries and a new ventilation-air conditioning system was installed throughout the building. Finally, the museum shop was moved to a new building between the museum and the site, and the area surrounding the museum was also rearranged.