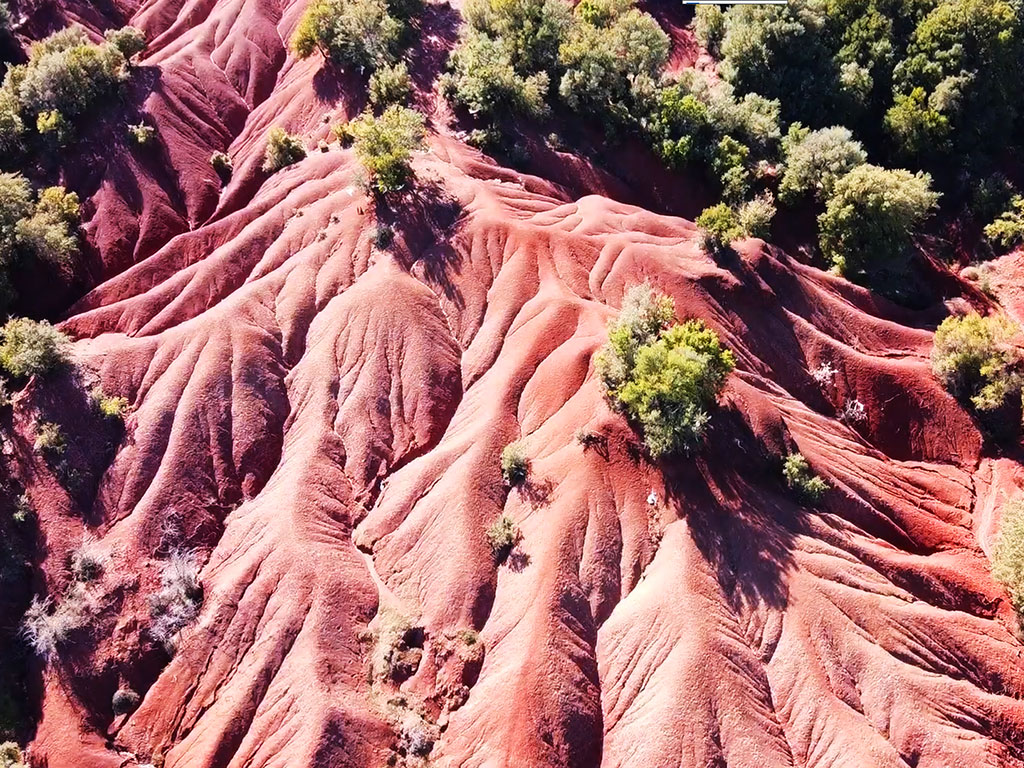 Kokkinopilos (translates into “red clay”) is a number of hills covered by red soil creating an eerie red landscape. The hills are 100-150 meters high and they are located 5 about kilometers north of Filipiada in the prefecture of Preveza, not far from Ziros lake. It is an unusual geological and natural phenomenon that has created an unreal landscape, occupying an area of 600 acres, enclosed by a dense forest. The thickness of the red pits according to the research of the Greek Geological Institute exceeds 20 meters.

Numerous geological research studies have been carried out in the area to find out what exactly caused this phenomenon. Research has shown that the Kokkinopilos hill complex, constitutes large amounts of iron oxides with clay, and is in fact a unique and impressive prehistoric karstic depression filled with red clays in an environment of transient lakes (wet and dry periods), with internal drainage. Chemical and mineralogical research by Spanish and American researchers claim that the climatic conditions that prevail in the area (rainfall, high temperature, winds and so on) are a determining factor in the formation of the terrain.

Over the years, Kokkinopilos has gathered international attention and it has been characterized as a “prehistoric geological phenomenon of great geological and archaeological importance”. The first big archaeological discovery of the area was made in 1962 by Eric S. Higgs. Excavations unearthed the remains of a stone axe which may date back to the Lower Paleolithic period as early as 250,000 BC and are on display today at the Archaeological Museum of Ioannina. Additional artefacts have been found from more recent periods suggesting that the site was continually inhabited for more than 100,000 years.

The best time to visit the hills is spring and summer, early in the morning or in the midday when the light is intense so that the colors are more dazzling. Kokkinopilos has been recorded as a natural monument and geotope of great geological value by the Greek Geological Institute.

There are two ways to reach the hills. The first one is by car from the National Road Ioannina - Preveza near the village of Agios Georgios, 20 m to the south of the tunnel of the Ancient Roman Aqueduct of Nikopolis. From there you should take the path, leading west and walk around 500 m. The second way is more difficult. Driving along the road that connects Lake Ziros with the villages of Rizovouni – Stefani, you take the 4th turn on the right. You follow the dirt road for almost 2 km, till you see the red hills on the right hand side. From that point you have to follow the trail for 500-1000 m in order to reach the hills.