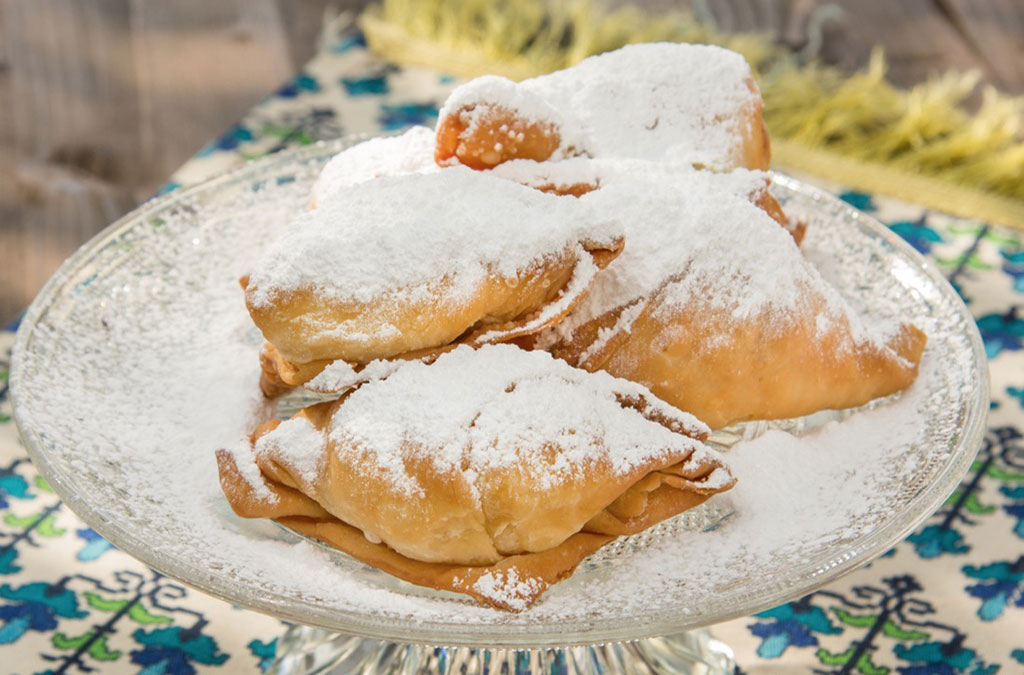 1. In a pot, add the water and the sugar. Stir until the sugar melts. After 5 minutes of boiling, turn off the fire and pour the honey. Stir until it melts.

2. In a large bowl, put the crumb, then add the cognac and stir it to go everywhere. Add the orange, nutmeg, and cinnamon, the chopped nut and then slowly, stirring the syrup until it is absorbed by the crumb. Let it rest for a few hours to fill the filling and absorb all the fluids.

3. Prepare the dough. Put the sieved flour in a pan, pour the salt and put half the oil, rub the flour with the fingers and add the remaining oil and then the 2 glasses of water slowly kneading at the same time. Knead with your hands until the dough becomes soft and smooth.

4. Take the dough and divide it into 6 balls. You get one ball and cover it with some flour and open the sheet. Cut the sheet in strips. Put one spoon of stuffing on the edge of each strip and fold it triangularly 5 times. Cut the dough after the 5th fold, push the triangular edges on the edges and pinch a clove. Continue until the strips are finished.

5. In the meantime, put oil in a deep saucepan and let it burn. To make sure that the oil is ready, drop a piece of dough to brown. When the oil is ready, you begin to fry by putting one by one in the oil. Once you have browned, remove it with a pierced ladle and place it on absorbent paper.

6. In the end, you get a chill and sprinkle it everywhere with powdered sugar.